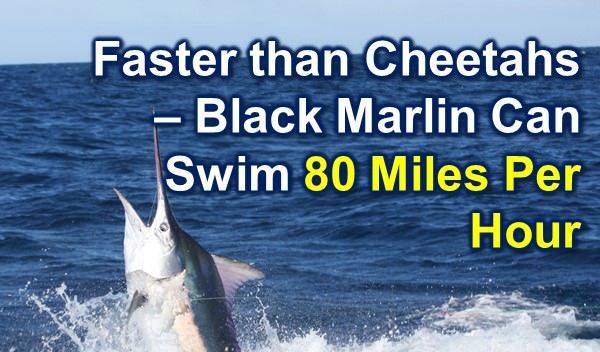 Cheetahs are the fastest land animals. This is one of the well-known cheetah facts that is sometimes disputed. Ok, we know that the Peregrine Falcon can fly at speeds of over 200 miles per hour, but the cheetah is still the fastest animal moving over the ground, and is twice as fast as the fastest human!

These large cats were once domesticated in Asia, where the Asiatic cheetah is now critically endangered. In Africa, there are more cheetahs, but a lack of genetic diversity and threats to their habitat are putting increasing pressure on African cheetah populations.

They best thing we can do is act quickly. By supporting wildlife conservation groups and saying no to items made from real cheetah fur, we can do our best to keep these big, fast cats happy and purring.

1. Cheetahs Are The Fastest Animals on Land

First, let’s establish the most important of cheetah facts: how fast they can run. A cheetah can run up to 75 miles per hour, or up to 120 kilometers per hour!

This is where one of the most confusing cheetah facts comes from, because there are in fact other animals on Earth that move faster. However, although these other fast animals are members of the animal kingdom, they aren’t technically classified as land animals.

For instance, the Peregrine Falcon is the fastest bird, and can attain speeds of over 200 miles per hour, or over 350 kilometers per hour! The Peregrine Falcon achieves these speeds in a long dive, from high in the sky, which it uses to catch its prey.

In the ocean, a black marlin can reach speeds up to 80 miles per hour, or over 120 kilometers per hour! This makes the black marlin the fastest recorded fish.

To settle any arguments over the fastest animal, it’s best to simply say that there are plenty that can move faster than humans! For the record, a cheetah is easily twice as fast as the fastest human on Earth today, Usain Bolt, who reached speeds over 27 miles per hour during part of a sprint.

2. Cheetahs in Asia Were Used for Hunting Like Greyhounds 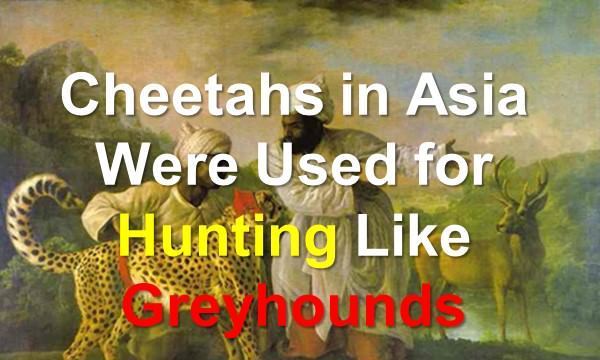 This is one of the most interesting facts about cheetahs. Cheetahs live mostly in Africa, and when we think of a cheetah, the image that usually comes to mind is of a cheetah chasing its prey in the grasslands of Africa. This image is not far off the truth, as the majority of cheetahs do live in Sub-Saharan Africa.

There were once cheetahs in India, Iraq, Israel, Russia, Saudi Arabia and more countries! Cheetahs rely on an abundance of prey to survive. As their habitat was threatened, they were poached, and their prey diminished, Asiatic cheetahs dwindled in number.

Asiatic cheetahs, which are a distinct subspecies from African cheetahs, were once tamed and used as hunting animals, much like greyhounds! This is one of the cheetah facts that is both amazing and sad.

The animals were used in India by royalty during colonial times and were known as the hunting leopard. Sadly, this amazing fact did not help the cheetahs to survive in greater numbers on the continent. 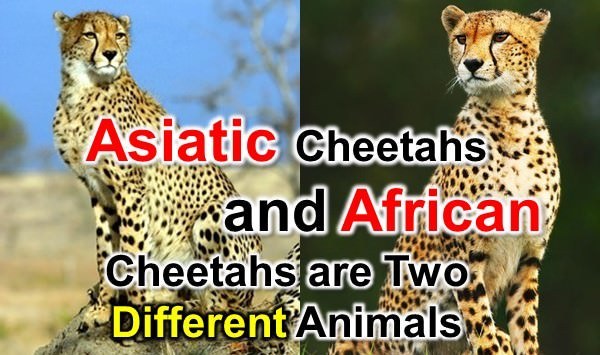 The cheetah’s beautiful and striking fur is something that people have admired for a long time. As a result of this, poaching threatens cheetahs in Africa. The practice continues despite efforts by conservationists to protect cheetahs in the wild. To help ensure cheetah facts will interest people for many generations to come, you can support a wildlife group, and ensure you never buy anything made from real cheetah fur. 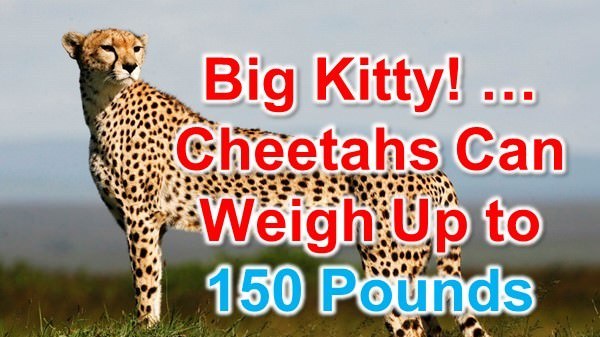 Many cheetah facts are related to facts about all big cats. Big cats include lions, tigers and leopards. While this is not a technical classification, the closest evolutionary relatives to cheetahs are pumas and jaguars.

Cheetahs are not always included with the other big cats, because they aren’t as large as lions or tigers. However, they are much bigger than your average house cat!

Some cheetahs can weight up to 150 pounds, or over 70 kilograms! Cheetahs are also very long. Get ready for some more big cheetah facts: cheetahs can measure nearly 5 feet, or up to 150cm, in length from their head to the beginning of their tail! Cheetah’s tails can be nearly 3 feet long, or over 80cm long! Taking these measurements together makes some cheetahs nearly 8 feet long, or over 230cm long, from their nose to the tip of their tail!

It may not be the king of the jungle, but a cheetah can be up to 3 feet, or nearly one meter, tall at the shoulder! It sounds like a tall tale, but the height of a cheetah is another one of the surprising cheetah facts. 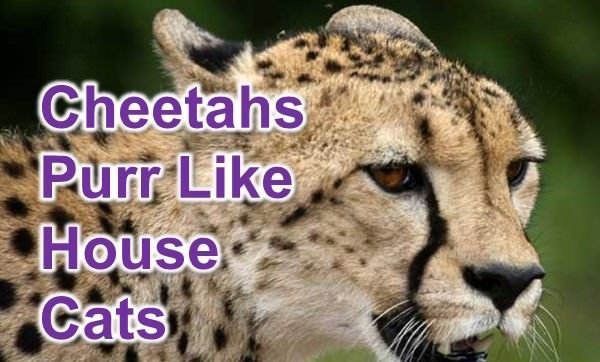 We know from our cheetah facts that cheetahs are much larger than your average house cat. However, another one of the surprising cheetah facts is that, just like happy house cats, cheetahs purr.

When cheetahs are happy, mostly during meetings between cubs and mothers, they will purr. They also make a wide range of other noises.

From chirping to hissing and growling, cheetahs are very vocal animals. Cheetahs use their vocalizations to communicate with each other, and to scare away predators.

6. Cheetah is a Racing Machine With Turbo-Charged Lungs and Heart 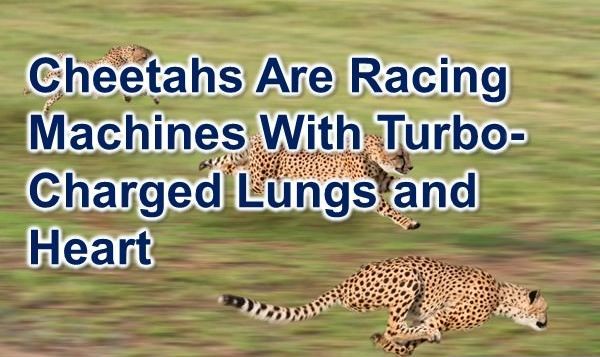 One of the cheetah facts that teaches us about evolution is the fact that cheetahs are not very genetically diverse. When scientists study the genome of an animal, they test the DNA, or genetic code, from different members of the population.

When scientists tested cheetahs from all over Africa, they found that there was not a great variety in their genetic code. While members of a species always share a good deal of genetic code, they should have enough diversity in their genes to allow for certain members of the population to adapt to changes in the environment.

Part of the reason that cheetahs do not have great genetic diversity is that they are such specialized animals. One of the special traits that evolution has provided the cheetah with is an incredible circulatory system to fuel its incredible speed.

One of the internal cheetah facts is that their hearts and lungs are much larger than is strictly necessary for their body. When sprinting to catch prey, the cheetah’s lungs and heart turn the cheetah into a supercharged and turbo-powered animal on the move!

Scientists also believe that the genetic similarities of cheetahs may be the result of environmental factors, or a period of inbreeding some time in the evolution of cheetahs. Because cheetahs do not have a great deal of genetic diversity, they are more sensitive to changes in their environment, which can make them vulnerable.

Changes in the environment affect all cheetahs in more or less the same way. This lack of genetic diversity is another reason that the Asiatic cheetah is a critically endangered species.

7. No Broccoli for Me! … Cheetahs Are Carnivores

Cheetahs, like other big cats, are carnivores. They eat a diet made up exclusively of meat. It’s the incredible sprinting speed of the cheetah that allows it to catch prey.

Some of the animals that cheetahs hunt are quite fast themselves! Gazelle, which are often the prey of cheetahs, can run up to 50 miles per hour, or up to 80 kilometers per hour!

Cheetahs have evolved over time so they can hunt these very fast animals. Another one of the surprising cheetah facts is that cheetahs hunt by day, while most other cats hunt by night.

Cheetahs rely on their eyesight as their primary sense for hunting, while other cats have a greater reliance on scent. For cheetahs, it’s all about spotting their prey and chasing it down!

While some house cats can have an air of indifference, cheetahs are very sociable animals. This is not to say that cheetahs socialize with humans. We have mentioned that some Asiatic cheetahs were domesticated. The cheetah fact we’re interested in here is the way that cheetahs relate to each other.

Adult male cheetahs typically hunt in groups. These groups are often made up of brothers. Sometimes, lone cubs will form groups together, or join one of these sibling groups.

Female adult cheetahs are typically more solitary; however sometimes mother and daughter groups form. Female cheetahs spend most of their time hunting and caring for their cubs.

9. Cheetah Cubs Have a Mantle of Hair to Disguise Them from Predators 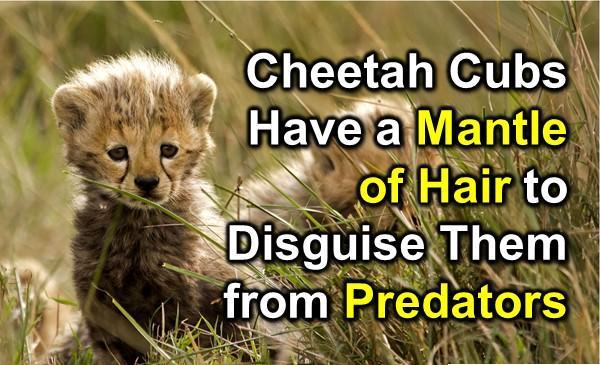 Cheetahs and their moms share a special bond. The cheetah mothers do most of the raising of the cubs. They nurse the cubs, protect them, and teach them how to hunt.

One of the well-known and very stylish cheetah facts is that cheetah cubs have a row of hair on their back when they are born. This ridge of hair is called a mantle, and it’s speculated that cheetah cubs are born with this to confuse predators. Scientists think the cheetah cubs’ mantle makes them look like honey badgers, which discourages predators.

Cheetah cubs need all the protection they can get. While adult cheetahs are not often preyed upon due to their fast speed, larger cats, wild dogs, hyenas, and even eagles often prey upon cheetah cubs!

After the mother has raised her cubs, she will let them go off into the wild. For a short time the brothers and sisters will stay together. Then, the sister cubs will leave to form a home range and the brother cubs will form a hunting group that they will stay with for the rest of their life.

10. Not in My House! Male and Female Cheetahs Live Separately 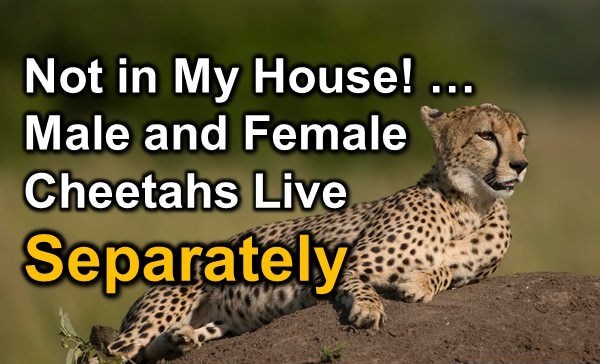 Cheetahs do not live as mating couples, and a study of cheetahs on the Serengeti showed that cheetah females are very promiscuous. We’ve discussed the cheetah facts about the groups that they form.

The male groups, or solitary male cheetahs, will mark out a territory that overlaps several female home ranges. Male cheetahs are very territorial and fights over territory often result in severe injury or death.

As habitats are threatened, this reduces the ranges and territories for cheetahs and cheetah groups. The increasing competition for prey and propagation further endangers cheetahs.