Cyber bullying shares many similarities with typical bullying. This can also reach a child anywhere there is cell phone reception or an Internet connection. Teaching cyber bullying facts to kids can help prevent them from being kids that cyber bully, or kids who are cyber bullied. 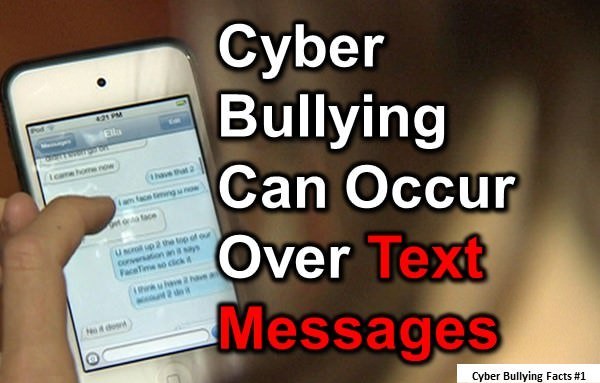 Bullying is any threatening behavior committed by children and adolescents where there is an imbalance of power. Bullying includes threats, insults, rumors and more. One main difference between bullying and cyber bullying is that physical violence cannot occur over electronic media.

However, one of the great concerns with cyber bullying is that it often accompanies typical bullying. For example, a child may be physically bullied in school during the day and then may be cyber bullied later that evening via social media messaging.

2. There Are No Cyber Bullies – Using Labels Doesn’t Solve the Problem 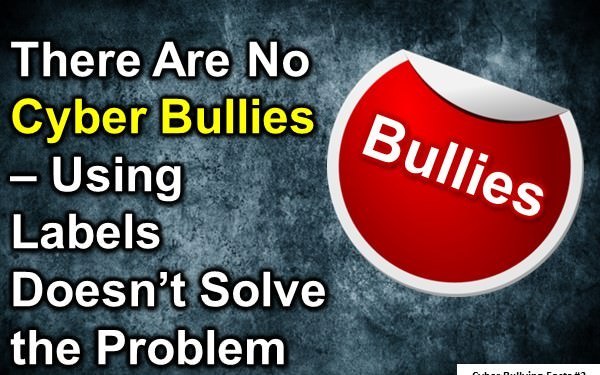 It’s important when addressing the issue of cyber bullying that we don’t use labels. By labeling children, we can inadvertently create an atmosphere that encourages cyber bullying. This also applies to children who are bullied, which is the term that should be used instead of victims.

When we stop using labels, we can create an atmosphere that allows children to change for the better. Cyber bullying is like typical bullying in this sense; we don’t want to reinforce the roles children play in bullying by using labels.

3. Anyone Who Witnesses Cyber Bullying is Involved in The Act 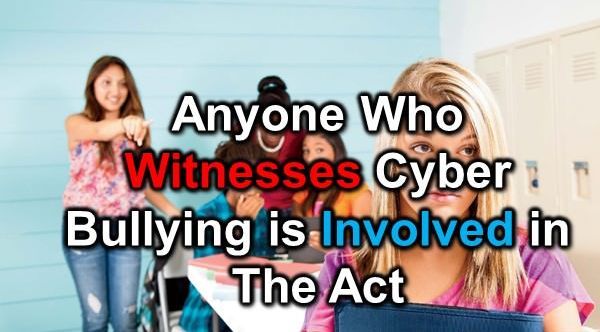 Another one of the cyber bullying facts that is shared with typical bullying is that there are many roles that children play in bullying. There are more roles than simply those of the child who bullies and the child who is being bullied.

All of these roles occur in cyber bullying. For instance, a child may repost a bullying link, or comment on a bullying post, without being the main child who is bullying. Children may also subscribe to a particular social media page and not report bullying that occurs there.

There may be children who post comments against the bully and defend the child who is being bullied. The roles in cyber bullying, like typical bullying, are not as clearly defined as we often think.

4. Cyber Bullying Can Happen to a Child Anywhere There’s Data 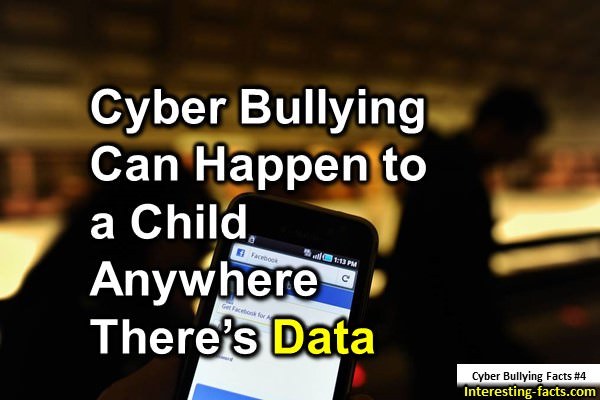 One of the great things about the Digital Age is that we have the ability to communicate almost anywhere, and with anyone. Smartphones and wireless technology have given us access to information on the go, and the ability to connect with people all over the world.

Unfortunately, this is a double-edged sword when it comes to cyber bullying. The fact that we are constantly connected means that a child can be cyber bullied anywhere.

5. Cyber Bullying Can Happen to a Child Even When They Are Alone 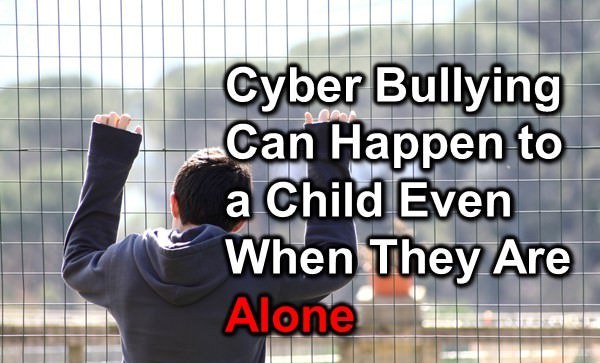 For the child who is bullied, they can be bullied when they are alone. For instance, a child might be checking their email alone in their bedroom when they receive a threatening email from a child who is cyber bullying them.

Cyber bullying when a child is alone can result in the child feeling further isolated. In the same sense, a child might be alone and be cyber bullying another child without an adult knowing. This is another troubling fact about cyber bullying, and this can make it more difficult to prevent than typical bullying.

6. 80% of Children Say Cyber Bullying Is Easier to Get Away With 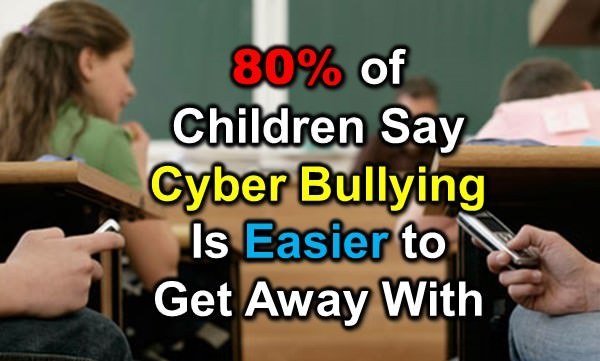 Often, children do not report when they see cyber bullying occur. A study in 2011 showed that 90% of teens who witnessed online cruelty ignored mean behavior.

However, there are children who will stand up to cyber bullies when there is no adult supervision. The same study showed that over 80% of children who have witnessed cyber bullying have seen other children defend a child being bullied, or tell a child who is cyber bullying to stop.

7. Cyber Bullying Can Be Anonymous 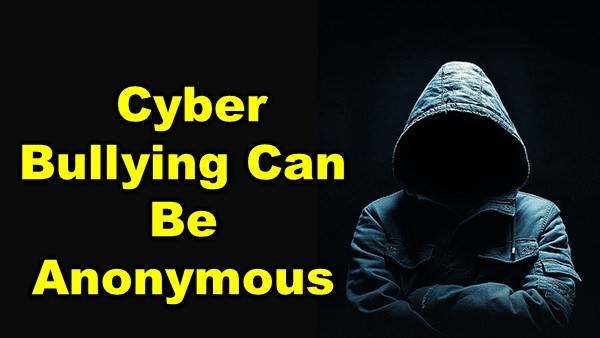 We know that bullying is easier when no adult supervision is in place. Cyber bullying can hide the identity of a child who bullies so they aren’t held responsible, even when the cyber bullying is discovered or reported to an adult.

Due to the nature of electronic media, children can setup false accounts, or even make a parody account of the child that they are bullying. 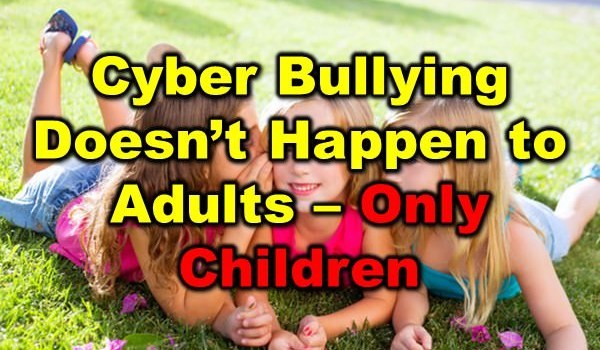 One of the facts of cyber bullying that is shared with typical bullying is that cyber bullying only occurs with children and adolescents. When a young adult or adult engages in bullying-like activities, this is not bullying, but is a crime, such as harassment or stalking.

While cyber bullying may share some similarities with the inappropriate behavior of adults, cyber bullying only occurs among children and adolescents. When a young adult or adult engages in these sorts of behaviors, these actions should be reported to law enforcement authorities.

9. Cyber Bullying Spreads Rumors at the Speed of Light 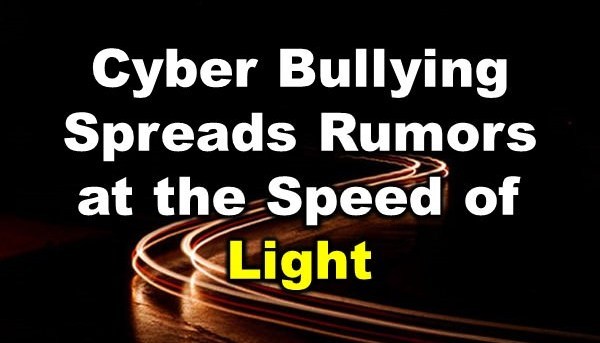 Electronic media moves and spreads information at the speed of light. One of the typical acts of bullying is to create false rumors or accusations. When this is combined with electronic media, the rumors and false accusations can spread far more quickly than they would via word of mouth. For instance, in the course of a school day, dozens of children who don’t even see each other face-to-face can spread a rumor online.

Another example is that children might post photos of themselves or achievements they are proud of. Other children might cyber bully these children by leaving mean comments on their posts. This can all occur within a matter of minutes. A child may have just celebrated a great achievement. But in a mere moment, another child can bully them and make them feel bad. 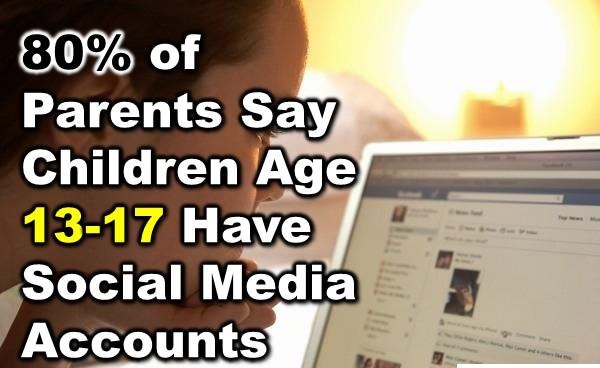 We tend to think of cyber bullying occurring between children who know each other outside of electronic media – for example, classmates or playmates. However, in the world of global communication, cyber bullying can occur between two children who have never even met each other and may be hundreds or thousands of miles apart.

The United States has some of the highest rates of Internet use among children and adolescents. Over 80% of parents with children aged 13-17, report that their child has a social media account. The National Crime Prevention Council estimates that cyber bullying effects almost half of all adolescents in the United States.

11. Girls are more likely than boys to be victims and perpetrators of cyber bullying.

15% of teen girls have been the target of at least 4 kinds of abusive online behaviours compared with 6% of boys.

It is estimated that about half of LGBTQ+ students experience online harrassment or bullying.

13. Instagram is the platform where the most cyber bullying takes place.

Young people report that 42% of them had experienced harrassment on Instagram.

14. The large majority of young people believe that social media companies should be doing more to tackle online bullying on their platforms.

15. Anonymity can be a benefit

4 out of 5 students said they would be more likely to intervene in cyber bullying if they could remain anonymous.

Parents may try to stop and manage the bullying through actions such as monitoring their children’s social media apps, teaching their children how to respond and ways to stand up for themselves, providing emotional support and in several other ways.

17. Cyber bullying may be a cause of youth suicide. 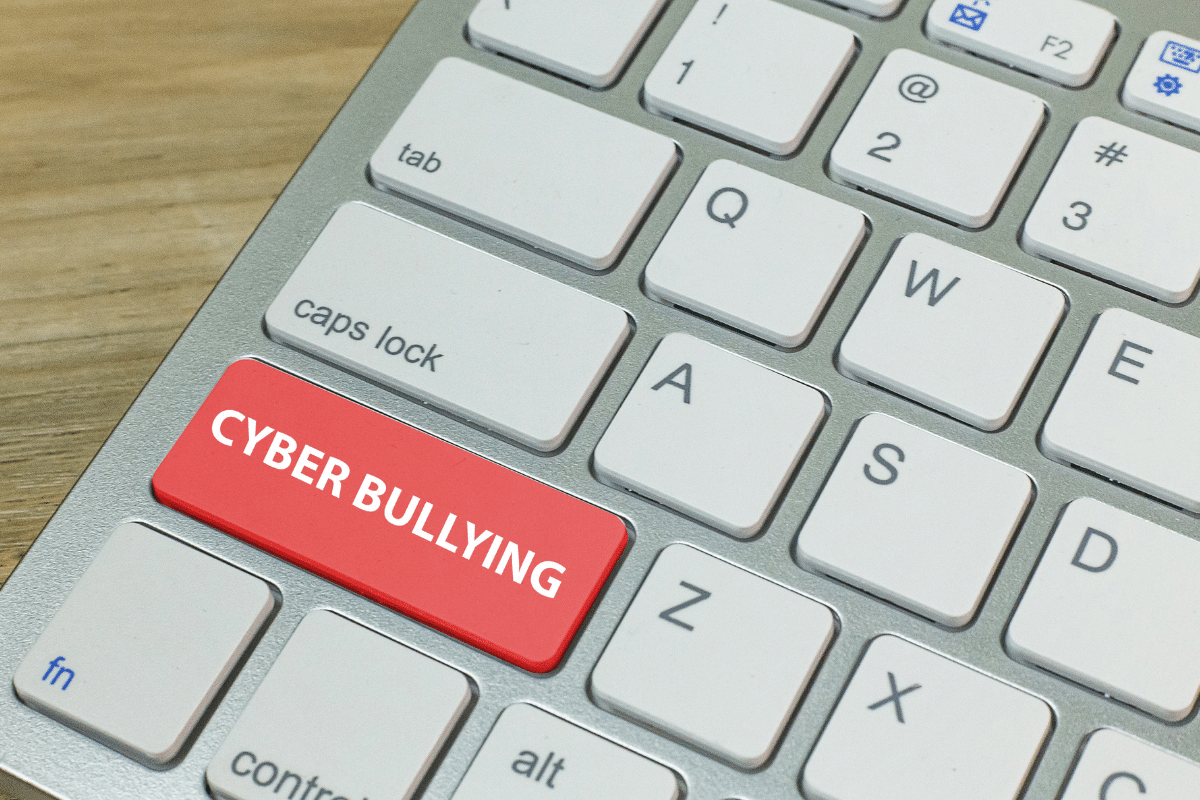 90% of teens say that cyber bullying is a problem for their age group and 63% say it is a major problem. However, it still happens every day.

19. Cyber bullying can also happen in the online gaming world.

Chat on gaming platforms can be used as a place for cyber bullying. This tends to be experienced more by boys than girls.

20. Cyber Bullying can take many forms.

When we hear the word bullying we tend to think about harassment and negative talk. However, cyber bullying can also take place through exclusion, trickery, outing or cyber stalking.

Like bullying, victims will often not report cyber bullying. They may be embarassed or concerned that the bullying will increase if they report that it is taking place. Under 20% of cyber bullying cases are reported to officials.

22. Cyber bullying can carry over into the real world

If the cyber bullying is taking place between kids who are at the same school or have a physical connection like a sports team it can move in and out of the online world.  Around 83% of youth cyber bullying victims have suffered abuse in real-life as well.

Nearly 7 out of 10 online users admit that they have acted inappropriately online. However, only 15% think that their behaviours constituted cyber bullying.

24. Cultural Differences are a major source of online bullying

Additionally, 52% of those with learning difficulties will experience online bullying.

27. 1 in 20 Cyber Bullies sets up a fake social media profile

Setting up a fake proifle allows bullies to continue to stalk their victim even once their “real” accounts have been blocked.

28. Nearly 1/4 of cyber bullying victims quit social media all together