Thanks to their unique black-and-white stripes, zebras are among the most photographed and recognizable animals in the world. But there is so much more to these African animals than just their patterned coats. Many of their characteristics are truly impressive, from their running abilities to their strong social bonds.

If you want to find out what these black and white beauties have in common with snowflakes and how they ended up on the coast of California, keep reading these interesting facts about zebras.

From short and sweet zebra facts to more detailed insight about their traits and personalities, some of this information about these magnificent mammals might just surprise you.

Zebras are strict plant-eaters. Their diet consists mainly of plants, grasses, roots, and occasionally bark. Their powerful jaws and teeth help them crush tough plants. However, they are not effective at killing other animals or eating flesh.

Zebras can spend up to 18 hours per day grazing. Since they mostly inhabit places with bountiful amounts of grass and plants, and they don’t have competition for food, it’s easy for them to spend all day eating.

Unlike many other mammals, it’s believed that zebras can see in color. However, they probably can’t distinguish between certain colors very easily, like orange.

The position of a zebra’s ears allows them to hear in almost any direction. They can also turn their ears in different directions.

5. Wild Zebras Can Survive a While Without Water

Wild zebras can go about 5 days without drinking water.

Like horses and humans, zebras cool down by perspiring.

Also, like horses, zebras have locking joints. This means they can lock their knees into place and sleep standing up without being at risk of falling over. However, they can also sleep lying down too.

8. Zebras Are Mobile Right After Being Born

After a mother zebra gives birth, she will keep her foal away from other zebras for a number of days. This is to give the foal time to recognize her scent, stripe pattern, and voice.

In the wild, a zebra can live for approximately 20 years. They can live for an additional 5 or 10 years in a zoo. The oldest recorded zebra was named Citation; she was euthanized at the age of 37 at the Oregon Zoo.

12. Zebras Communicate With Each Other in a Number of Ways

Zebras can communicate with sounds and facial expressions. Verbally, they make barking and snorting sounds. The position of their ears, showing their teeth, and how wide their eyes are open are also signs of communication.

13. Zebras Have Stripes to Help Keep Bugs Off of Them (Most Likely)

Although it’s not known for certain, most scientists believe that zebras have stripes to combat biting insects that can carry deadly diseases.

Compared to horses, their closest relative, zebras, were bitten disproportionately less when living under the same conditions. This led scientists to believe that their stripes work as a form of pest control.

Some scientists think that zebras actually have stripes as a form of camouflage. When zebras are together in a large group, this can confuse predators.

An adult zebra can run up to 40 mph (64 km/h) at full speed. They can also run in a zigzag pattern when attempting to outrun predators.

16. Zebras Have a Few Forms of Self Defense

Zebras defend themselves and their herd by kicking, biting, and thrusting at predators.

17. A Zebra Can Kill a Lion With Just One Kick

A zebra can kick with almost 3,000 pounds of force. This is strong enough to kill a lion with a single blow to the body. This will only happen if a lion is attacking them and the lion is close enough to take the kick.

Zebras prefer the company of other zebras. They live in groups, which are typically led by a male, called a stallion.

Plains and Mountain zebras are the most social of the three species. Their herds can consist of up to 1000 individuals. This number is broken down into separate family groups (called harems), which usually consist of an adult male, several adult females, and their young.

Grévy’s zebra, on the other hand, sometimes live in loosely associated herds. Male adult Grévy’s zebra can live alone or in a bachelor herd made up of other males.

19. A Group of Zebras is Called a Dazzle

A group of zebras is called a dazzle, although a group is also commonly referred to as a herd or a zeal too.

20. Zebras Belong to the Genus Equus

All zebra species belong to the genus Equus. The only other members of this genus are donkeys and horses.

21. Unlike Horses, Zebras Have Never Been Domesticated

Unlike horses and donkeys, the other members of the genus Equus, zebras have never been domesticated.

22. You Shouldn’t Ride a Zebra

Unlike their close relative, the horse, zebras are not ideal animals to be ridden. This is due to their unpredictable nature, flat backs, and lower strength tolerance.

Plains zebras also need to traverse a range of habitats, from tall mountains to the wide plains of the Serengeti. Grévy’s zebras, on the other hand, usually stick closer to grassland habitats.

24. Plains Zebras Are the Most Common of the Species

Plains zebra are the most abundant of the three species. It’s estimated that there are somewhere between 150,000 and 250,000 Plains zebra in the world.

25. Grévy’s Zebras Are the Least Common of the Species

The worldwide population of the Grévy’s zebra is estimated at less than 2,000. Luckily, this number is considered stable at the moment.

26. The Species as a Whole Isn’t Doing Too Well

The Grévy zebra is the most troubled out of the three species. They are listed as endangered on the IUCN’s Red List of Threatened Species. Their decline in numbers is a result of factors like loss of habitat, poaching, drought, and disease.

The Mountain zebra faces similar threats to the Grévy zebra. They are listed as vulnerable on the IUCN’s (International Union for Conservation of Nature) Red List of Threatened Species. Luckily, the Plains zebra is doing well; they are not endangered or vulnerable.

27. Zebras Are Native to Africa

Mountain zebra mostly inhabit South Africa and Namibia. Grévy’s zebras mostly live in Kenya and Ethiopia. Since the Plains zebra are the most common species of zebra, they are more widespread. They occupy the countries of east and southern Africa.

28. You Can See Wild Zebras in California

In the coastal town of San Simeon, California, a herd of about 120 zebras roams freely. They were brought over from Africa by newspaper tycoon William Randolph Hearst in the 1920s to be part of his private zoo.

They have access to miles of lush grassy hills to graze on. You can usually spot them from the road as you travel along Highway 1.

29. The Grévy Zebra Is Named After a French President

The Grévy zebra is named after Jules Grévy, a 19th-century French president. In 1882, the president was gifted a zebra from the King of Abyssinia (what is now Ethiopia). Although, they’re also referred to as Imperial zebras.

30. The Grévy Zebra Is the Largest of the Three Species

The Grévy zebra can weigh as much as 1,000 pounds, making them the largest of the three species.

31. The Mountain Zebra Is the Smallest of the Species

32. No Two Zebra’s Stripe Pattern Is the Same

Like fingerprints on humans, or snowflakes falling from the sky, no two zebras have the same stripe design; each is uniquely different.

33. The Strip Pattern of a Zebra Varies by Species

The pattern of a zebra’s stripes depends on its species. The Grévy zebra has stripes that tend to be very narrow and cover its entire body. The Plains zebra varies by its location. But compared to other species, they have broader stripes which are vertical on the forefront of their body and change to more horizontal on the hindquarters.

The Mountain zebras have narrow vertical stripes on their neck and torso but leading to their rump and haunches, they have fewer stripes, and they become wider. Their bellies are stripeless.

Underneath their black and white fur stripes, the skin of a zebra’s body is black.

35. Zebras Can Be Crossbred With Other Animals

The term “zebroid” is used to refer to all zebra hybrids. Crossbreeding has created various zebroids, including zedonks (zebra and donkey) and zorses (zebra and horse).

The main predators of the zebra are lions, wild dogs, hyenas, leopards, and cheetahs. If they’re near water, Nile crocodiles also prey on them.

However, the largest threat to a zebra’s life is linked to human actions, like poaching and habitat destruction. Although humans will occasionally eat a zebra, they are primarily hunted for their skin.

38. Zebras Have an “All For One and One For All” Mentality

Zebras form strong social bonds and help protect each other from predators. If someone in the herd is injured, the other members of the group will form a circle around them to deter the attacker.

39. Zebras Are Friendly With a Few Other Mammals

Zebras sometimes form mixed herds with other mammals that live in the same habitat as they do. They are most friendly with wildebeests, but they’re also tolerant of giraffes, impala, kudu, and baboons.

41. The Zebra Is the National Animal of Botswana

The zebra is the national animal of the Southern African country of Botswana. They symbolize the significance of wildlife. Their black and white stripes also represent the equality of all people, regardless of the color of their skin.

In the United Kingdom and other Commonwealth countries, the black and white striped pedestrian road crossings are called zebra crossings. The most famous zebra crossing has to be Abbey Road in London. This is where the Beatles shot their iconic Abbey Road album cover.

43. A Zebra Is a Mascot for a Popular American Chewing Gum

Fruit Stripe is a popular US chewing gum introduced in the 1960s. It has a zebra as its mascot, whose name is Yipes. Each individual piece of gum also has stripes, just like Yipes.

What are zebras good at? 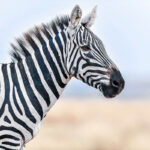 Zebras have excellent hearing and eyesight and can run at speeds of up to 35 miles per hour (56 kilometers per hour).

Why do zebras show their teeth? 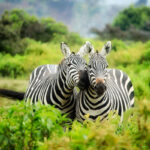 Zebras show their teeth as a form of greeting. It is thought to lessen the likelihood of aggressive behaviour towards them.

Why do zebras have stripes? 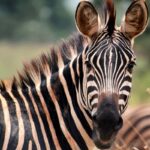 It is thought that the stripes deter flies. Studies have shown that fewer flies land on zebras than similar animals, mostly one colour.

Why do zebras kill their foals? 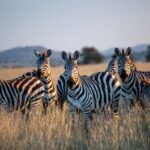