Earth facts teach us about the amazing planet that we call home. This fast-moving planet is spinning at over 1,000 miles per hour and the temperature at its core is over 10,000 degrees Fahrenheit!

Many people call Earth Mother Earth, and the planet’s unique atmosphere protects and sustains life in conjunction with the magnetosphere and the geological movements of the planet itself.

10 Interesting Facts about the Earth

When Earth was born, it was hot and spinning fast. While life may seem like it gets more hectic each year, the Earth is actually cooling down and slowing down. Maybe we should take a lesson from Mother Earth and things would be more peaceful here!

1. The Earth Generates $72 Trillion of Goods and Services Each Year

When we look at Earth facts, we look at the planet we call home. The incredible natural resources and the ingenuity of the people that live on Earth combine to make an impressive output of goods and services that are traded to sustain, inform and entertain.

The sheer scale of the world economy is mind-boggling. Earth facts teach us that each year, humankind produces $72 trillion worth of goods and services.

Whether these are tangible goods or not, we’re using the natural resources of the Earth to produce them. After all, everyone is breathing the Earth’s atmosphere!

When we examine historical Earth facts, we see that the production of goods and services across the world really took off about 200 years ago with the dawn of the Industrial Age.

Humankind has gotten really good at exploiting the many materials the Earth has to offer, including forging metals mined from the surface at extreme temperatures that are as hot as lava from a volcano.

Following the historical Earth facts about the etymology of the word Earth, we see that it comes from Old English, which is one of the Germanic languages. The form is found even earlier in proto-Germanic as something like erde.

Digging deeper into historical Earth facts, we find that the proto-Germanic word dates back to the time of the Proto-Indo Europeans. This early culture dates from some time around 5000 BCE.

Linguists have revealed Earth facts about the origin of the word, and it was likely pronounced something more like h’er. The word changed over time until it became the word that we pronounce as earth today. These Earth facts are great because they show how language can change over thousands of years.

3. The Earth Isn’t a Perfect Sphere – It Has a 27 Mile Tall Bulge at Its Belly

We don’t need Earth facts to tell us that it’s not polite to talk about your mother’s weight. Many people call Earth Mother Earth because the planet sustains all life as we know it. In the same way, a mother feeds and protects her children, Earth feeds and protects all of humanity.

Earth facts regarding the shape of Earth show that our planet is not a perfect sphere. There is a bulge around the center of the Earth. This is what’s considered an oblate spheroid; it’s like a squashed ball.

This bulge around the center of the Earth means the diameter at the equator is 43 kilometers, or 27 miles, larger than the diameter going top to bottom or from the North Pole to the South Pole. 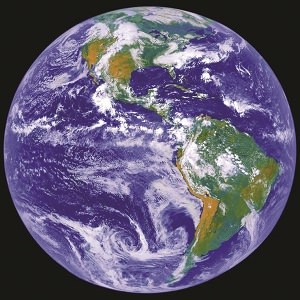 When we examine geological Earth facts we find that the Earth is made up of a handful of elements and a sprinkling of trace elements. The Earth is the densest planet in the solar system. Let’s take a look at some fun Earth facts about the elements that make up the Earth.

The Earth is strong! Earth facts tell us that it is 32.1% iron. Surprisingly, oxygen accounts for 30.1%. This is due to the number of oxides that make up the Earth. Silicon, which makes computer chips, makes up 60.2% of the Earth’s crust and 15.1% of the total elements in the Earth.

From these facts, it’s clear why certain elements are valuable. A metal like gold is only a trace element compared to the mass of the Earth. Looking at the distribution of elements in the Earth, Earth facts show that nearly 90% of all iron on Earth is in the core.

When scientists look at what causes this heat, it appears that 20% of the heat is still the Earth cooling off from when all the rocks slammed together to form the planet in the early solar system. Another 80% of this heat occurs in the form of radioactive decay.

According to Earth facts, radioactive potassium, uranium, and thorium are all present in the Earth’s core and are giving off a lot of heat. So much heat, in fact, that the temperature of the Earth’s core is as hot as the surface of the sun, at more than 10,000 °F!

Based on the fact that much of this heat energy comes from radioactive decay, it’s likely that when the Earth formed before the half-life of many isotopes had been reached, the Earth might have been putting out twice as much energy from the core.

6. If The Earth Was Smooth, A 1.5 Mile Deep Ocean Would Cover the World

There is a lot of water in the Earth’s ocean. If the Earth was totally smooth, with no mountains, or valleys on land, or underwater, the result would be a 2.7 kilometer, or 1.5 miles deep ocean that covered the entire surface of the Earth.

There is no clear boundary between the Earth’s atmosphere and outer space. While we typically think of the Earth as this perfect sphere, we already know from our Earth facts that it’s more like a squashed ball.

Looking at the edge of the atmosphere, Earth facts become a little blurry. The atmosphere slowly becomes thinner and thinner until it fades into outer space. There’s no clear line or sign that says welcome to outer space.

The atmosphere of Earth is one of the unique features that allow such an amazing array of life forms to exist on the planet. The atmosphere, in conjunction with the magnetosphere, protects us and the other forms of life on Earth from some of the most harmful energy that’s produced by the Sun.

8. Going as Fast as the Earth You Could Reach the Moon in 3.5 Hours

Earth facts about speed are blazing fast facts. The speed at which the Earth orbits the Sun is over 100,000 kilometers per hour, or over 66,000 miles per hour!

Moving at that speed, you could reach the moon in 3.5 hours, and you could travel the whole way around the Earth in about seven minutes.

When we look at Earth facts about how fast the Earth rotates, we find that it’s spinning fast, too. The Earth is spinning at 1,675 kilometers per hour or over 1,040 miles per hour!

When someone tells you that life moves slow, tell them some of these Earth facts and they might think we’re all living life in the fast lane!

We already know from our Earth facts that the Earth is spinning fast. It’s shocking to learn that the Earth, spinning at over 1,000 miles per hour, is actually slowing down.

The cause of the slowdown is the moon! One of the most surprising Earth facts is that the moon has such a big impact on the Earth. The friction caused by the Moon and other objects, such as other planets, pulls on the Earth and slows it down.

This is a good thing when you consider each year the length of a day gets a little longer. Based on the rate that the Earth is slowing down, when the moon first formed billions of years ago, the Earth was rotating so fast, that a day was only 5.5 hours long. That must have made for some fast sunsets!

10. 77% of the Earth’s Population Lives in the Northeastern Quadrasphere

Earth facts teach us that 90% of Earth’s population lives in the Northern Hemisphere. Going by the most recent counts, we also find that 86% of the Earth’s population lives in the Eastern Hemisphere. Putting these two facts together, we find that 77.4% of the people that live on Earth live in the Northeastern quadrasphere, or the northern part of the Eastern hemisphere.