2. A green banana has very high starch content – as the fruit yellows, this starch turns into sugars.

3. In 2010, an American man named Ashrita Furman took the title of “Most Bananas snapped in 1 minute” by breaking 99 of the yellow fruit with both hands in 60 seconds.

4. In 2012, a resident of Illinois managed to break a world record by peeling and consuming 8 whole bananas in 60 seconds.

6. A banana is made of about 75% water, which isn’t very much compared to other healthy wonders like the cucumber or radish which has 96% and 95% respectively. 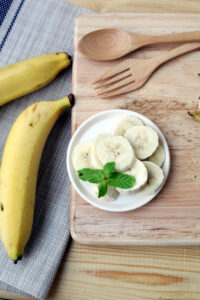 7. In 2018, a banana plant hidden in a Yorkshire van hire company’s office actually started to sprout fruit after being dormant for an entire decade.

8. The banana we all know and love is under threat from the same disease that struck the predecessor. Panama disease is rife amongst the Cavendish variety (the most common variety of banana) after being identified in Africa in the mid 2010’s.

9. The banana is produced asexually because it’s a sterile species, which makes it basically a clone of elder.

10. The Latin name for banana is “musa sapientum” which translates to fruit of the wise men.

11. A “Banana Republic” is a region that is solely sufficient on one single resource for its income.

12. Leather products like handbags or shoes can be polished with the inside of a banana skin, simply rub it on and wipe off with a rag. 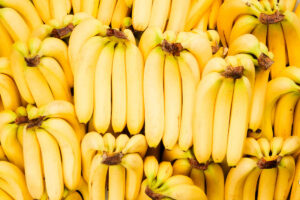 13. The 2014, the Nobel Prize in Physics was won by a team who discovered the reason why bananas are so slippery. As it turns out, it is all down to the polysaccharide molecules in the peel, a substance also found in our joints.

14. We all know bananas flavoring tastes nothing like a real banana, but according to a Gros Michel cultivator (the original commercial banana), the artificial flavor does taste very similar to this variety.

15. In Cairo you can buy papyrus from market stalls which is most often built from banana leaves.

16. It is believed that the first banana farms were in Southeast Asia. And that bananas are probably the first fruit that was ever cultivated.

17. The Portuguese brought bananas to the Americas in the 16th century from West Africa.

18. The banana plant can grow up to 25 feet in height. The root of the plant can be hundreds of years old but the part that is above the ground dies after a 12 month cycle.

19. The people of Uganda eat more bananas per capita than any other country in the world. On average, a Ugandan eats 500 pounds of bananas per year.

20. Bananas are sometimes called plantains. However, a plaintain is starchier than a banana and needs to be cooked to be edible. A banana is riper and sweeter and doesn’t require cooking to consume. 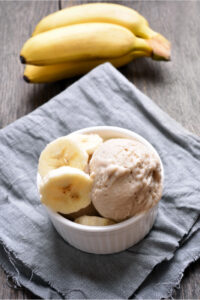 21. The banana is the 4th largest agricultural product in the world. It is estimated that 100 billion bananas are consumed across the world each year.

22. Bananas float when put into water.

23. Another variant of the banana is the lady finger. This smaller banana has a thinner peel and tends to be sweeter in taste than the average banana.

24. It is estimate that there are 50 different types of bananas across the world.

25. A bunch of bananas is called a hand. And of course just one banana is called a finger. Hands can weigh up to 100 pounds.

26. India produces more bananas than any other country on earth. The majority of the production is consumed domestically.

27. Bananas are high in fiber.

28. Bananas are rich in potassium. This is an electrolyte that our body uses to push electrical impulses through our body. Our hearts depend on these impulses so bananas are a good food for a healthy heart.

29. Banana plants are more herbs than trees. They are considered to be the largest herbaceous plant in the world.

30. To travel to the UK and Europe bananas are packed into reefers. The temperature on these reefers cannot exceed 13 degrees. This stops the bananas from ripening before the arrive.

31. Bananas are actually radioactive because they contain an unstable radioactive isotope called potassium 40. However, the amount of this isotope in each banana is so small that it is estimated you would need to eat 10 million bananas in one sitting to experience any harm. That’s alot of bananas! 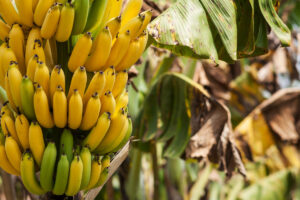 33. There is a red banana. Well the colour tends to be more between pink and purple but it is part of the Musa Acuminata species. If eaten when it isn’t ripe the red banana will taste bitter. A ripe one does taste a little like strawberries.

34. Bananas should be peeled from the dark tip, not from the stem. This is because bananas are grown upside. This means that the dark tip is the strongest part of the banana.

35. If you want to speed up a banana ripening, put it into a paper bag ideally with an apple or a tomato. And removing a banana from its bunch actually slows down the ripening process.

36. Bananas can be used instead of sports drinks. A study has found that consuming half a banana every 15 minutes is as effective as taking a sports drink. And bananas contain antioxidants that can help with recoveries. This is why you will generally see alot of banana skins at the start of any endurance sporting event.

37. Bananas were marketed by Jules Verne, author of Journey to the Centre of the Earth. In the novel he described bananas as being “as healthy as bread, and as succulent as cream”. The success of the book sparked interest in bananas in France and the United States in the 1870s.

38. In the Hindu religion, banana trees are said to be a home to Pontianaks. Pontianaks are the spirts of women who died during childbirth and are believed to terrorize expectant mothers. On a slightly happier note Hindus also believe that banana trees can represent the goddesses Lakshmi and Parvatis.

39. Bananas are actually berries. There are three requirements to be called a berry: an outer skin, a fleshy middle and a middle with seeds. Bananas fulfill all three criteria!

40. Bananas are considered good for your eyes as they contain Vitamin A. They don’t contain alot of Vitamin A but something is better than nothing. Vitamin A is particularly good for night vision as well as preserving the function of the membranes around your eyes.

So there we have it, facts to make you go bananas about, well… bananas.