Lincoln grew up in modest surroundings as a farm boy on the Illinois frontier. He had a tough childhood but was incredibly hard-working and determined to overcome any challenges he faced.

Abraham Lincoln kept the country together during the Civil War and he ended slavery in the United States. Perhaps it’s these Abraham Lincoln facts that keep us interested so many years on and keep historians busy researching his life and legacy. 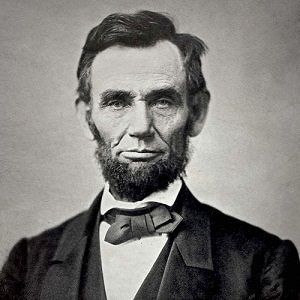 1. Abraham Had a Good Many Struggles with Mosquitoes

The first of our fun Abraham Lincoln facts is that Lincoln himself liked to have fun, and enjoyed a good joke. As President of the United States, Lincoln dealt with both a bloody civil war and the injustice of slavery. A good sense of humor often helps us get through difficult circumstances.

While Abraham Lincoln never made light of the circumstances the people of the United States faced in the 1850s and 1860s, he certainly knew how to tell a good joke. Speaking about his time as a soldier in the Black Hawk War, he recalled that he had not seen any Indians who were “live and fighting” but did he did have “a good many bloody struggles with mosquitoes”.

During the famous Lincoln-Douglas debates, Abraham Lincoln debated Stephen A. Douglas for the Illinois seat in the senate in 1858. During the course of these debates, Abraham Lincoln showed that he was quick with his wit. When Douglas accused Lincoln of being two-faced, Lincoln replied, “Honestly, if I were two-faced, would I be showing you this one?”

Lincoln was a great storyteller, which is part of the reason he had such a great sense of humor. This is another of the Abraham Lincoln facts that help us understand him as a person.

Clearly Lincoln was a funny man, and many people reported that he used humor in the stories he would tell. As a poor boy growing up on a frontier farm, life was difficult for Lincoln. He had many stories of the struggles he faced, and also told stories of his triumphs as a youth. He often told stories of his time as an officer in the Black Hawk War.

Abraham Lincoln wove humor into his stories to build bonds with strangers. During his time as a lawyer, he used humor to win the favor of judges and juries. He had an incredible memory that also allowed him to retell jokes that he had been told.

Not everyone seemed to like Abraham Lincoln’s storytelling, however. Back in the 1800s, public officials were not expected to have a sense of humor as they more often are today. During the Lincoln-Douglas debates, a journalist said that he “could not take a real personal liking to the man” because “[Lincoln] was inordinately fond of jokes, anecdotes, and stories”. Well, perhaps not everyone enjoys a good joke!

3. When Asked How He Learned Lincoln Said “I Studied With Nobody”

In addition to remembering jokes, Abraham Lincoln had an amazing ability to recall facts and figures. An avid reader since he was a youth, Lincoln had a thirst for knowledge and was endowed with the ability to retain everything he learned.

Abraham Lincoln’s ability for remembering things was helpful during his career as a lawyer. When asked about his learning method, Lincoln replied, “I studied with nobody”. Lincoln read, and remembered, so many law books in such detail that he passed his test to be admitted to the bar without any formal education.

4. Abraham Lincoln Was Ugly And He Knew It

We don’t expect Abraham Lincoln will roll over in his grave when we say that he was ugly! Unless of course, he rolls over laughing!

One of the funny Abraham Lincoln facts is that Lincoln himself used to joke about his own appearance, such as he did during the Lincoln-Douglas debates when Douglas accused him of being two-faced. During the 1800s, being cruel and being funny was harder to separate than they are today. Back then, jokes were often told of people instead of jokes being told with people.

This was no problem for Lincoln with his good sense of humor. While Lincoln preferred to be laughing with someone, he was not discouraged when people made jokes about him. In fact, he would often ridicule himself to get a good laugh from someone. It’s these sorts of light-hearted Abraham Lincoln facts that tell us how a man of simple roots could win the hearts and minds of the people of the United States during a difficult time in our country’s history.

5. Abraham Lincoln Was the Tallest President

Abraham Lincoln was tall. People are taller on average now than during the 1800s. This has to do with higher standards of living, better nutrition, and other factors. Because he was so much taller than the average height at the time, Lincoln, who was 6’ 4” tall, was considered to be a huge and imposing figure.

George Washington was 6’ 2” tall and Barack Obama is 6’ 1” tall, but Lincoln shares the title of tallest President of the United States with Lyndon Johnson. During one appearance early in his political career, someone was being assailed in the audience. Lincoln came down off the podium, grabbed the assailant by his neck and the seat of his pants, and threw him out of the event.

6. Lincoln was a Small Business Owner When He Was 23 Years Old

This is one of the more surprising Abraham Lincoln facts. We often think of Abraham Lincoln as a young farm boy, a lawyer, or a politician. For a short period of time, Abraham Lincoln was also a small business owner. He owned a corner store or general store as it was known at the time.

Owning a mom-and-pop store must not have been the right fit for Lincoln. Although the economy in New Salem was growing, the store was not doing well. Lincoln was only 23 at the time and sold his store on.

Lincoln was the postmaster in New Salem, Illinois, and also served as a surveyor for the county. While he was working these different jobs, Lincoln read constantly. It was around this time, from 1833-1835, that he made the decision to become a lawyer and began teaching himself how to practice law.

8. Lincoln Grew His Beard After He Read a Letter from an 11 Year Old

Early pictures of Lincoln during his time as a congressman show him without a beard. As late as 1846, the beard is nowhere to be found. Years later, in the Lincoln-Douglas debates in 1858, we’re still seeing a bare-faced Lincoln. However, the iconic image that everyone remembers of Lincoln is with his beard.

During his campaign to become President of the United States, a young girl named Grace Greenwood Bedell Billings wrote Lincoln a letter. Grace was only 11 years old at the time. She told Lincoln “if you let your whiskers grow […] you would look a great deal better for your face is so thin. All the ladies like whiskers and they would tease their husbands to vote for you and then you would be President”.

Lincoln always had a fondness for kids and was particularly attached to his own children. This may be due in part to the difficult time he himself had growing up. He responded to Grace Bedell a few days later and from then on he always wore a beard. This is one of the more inspiring Abraham Lincoln facts for kids. Bedell was only 11 years old and she got the President of the United States to change his look!

While Abraham Lincoln had a good sense of humor, he was no joke! When the Civil War began, the United States was thrown into the greatest crisis it had ever faced. The Civil War would come to define Lincoln’s presidency. And this will establish his place in history as one of history’s great leaders.

After the Battle of Fort Sumter in 1861, Lincoln expanded his war powers and established himself as the commander-in-chief of the Union forces. Lincoln was the first President of the United States to take control of the armed forces in this way. He certainly was no joke!

Lincoln’s straightforward, no-nonsense style of leadership was necessary at the time. We wonder whether some Abraham Lincoln facts would be different if the United States had not been involved in a Civil War while he was President. Perhaps Lincoln would have been a great statesman, sharing his funny stories with diplomats from around the world in a time of peace.

10. Abraham Lincoln May Have Used Emoticons

The saddest Abraham Lincoln facts relate to his assassination. In 1865, Lincoln was assassinated and we will never know what great things he may have gone on to achieve in his second term as President of the United States. After winning the Civil War and freeing the slaves, Lincoln was poised to help the country rebuild and heal its wounds.

Lincoln was clearly a man ahead of his time. He was hard-working with a good sense of humor. These are qualities that we seek in our leaders today. Lincoln established powers of the presidency that are still in place today. He was so forward in his thinking that he may have even used punctuation to create an emoticon in 1862. A team who works in historical newspapers found this transcript of one of Lincoln’s speeches:

If you enjoyed reading this post don’t miss my article on 17 Interesting Facts about Georgia Colony.