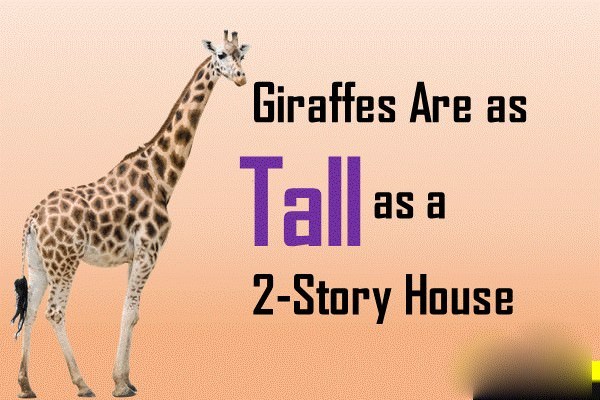 Interesting Giraffe facts continue to fascinate people of all ages. There’s just something about these long-necked animals that captures our imagination. When kids learn about nature, one of their favorite subjects is giraffe. These unusual looking creatures have long necks and eat from the tops of trees.

The beautiful fur of the giraffe is also something that draws us to this animal. Although giraffes are known to fight each other from time to time, they generally have a peaceful demeanor.

Interesting facts about giraffe can help kids get excited about learning facts about nature. The special adaptations of giraffes help us learn about evolutionary theory and the nature of life on Earth.

1. Giraffes Are as Tall as a 2-Story House

Perhaps one of the best-known giraffe facts is that giraffes are the tallest land mammals on Earth. While the Blue Whale is probably the largest animal to ever live on Earth, the giraffe can rightly claim to be the tallest mammal living on land.

Giraffes can grow up to 19 feet, or nearly six meters, in height! While we generally think of the giraffe’s neck as the part that makes it tall, giraffes also have the longest legs of any land mammal. Their legs alone are roughly six feet tall, which is taller than most people.

2. Giraffes Necks Grew Over Time … Over Millions Of Years 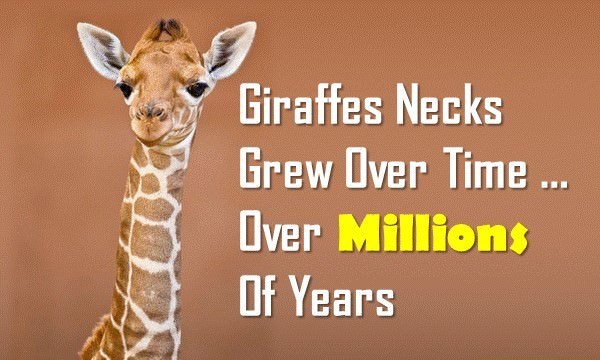 You can probably guess one of the best-known giraffe fun facts: giraffes have one of the longest necks of any animal. Their necks can grow to be seven feet long!

The giraffe’s neck is an example of evolution. Evolution is the change that occurs to animals over time, from generation to generation. When a new generation of animals is born, one of the animals may possess a trait that gives it an advantage over other animals. This advantage is typically linked to the environment in which the animal lives.

The ancient ancestor of the giraffe was an animal with a neck more like a horse or a zebra. At some point, one of these animals was born with a long neck, and this gave it an advantage in reaching the leaves of trees to eat. From generation to generation this trait continued to provide the animal an advantage and a new set of species evolved from the ancient ancestor of the giraffe.

Not all descendants of the ancient ancestor of the giraffe evolved in the same way. Some species evolved differently because their traits gave them an advantage in other ways. There are members of the giraffe family, or Giraffidae, that evolved to have larger bodies than modern giraffes. Many of the species of the Giraffidae family died out over time. The special traits, or evolutionary adaptations, of the giraffe have allowed it to survive while other species became extinct.

One endangered species that still remains from the Giraffidae family is the okapi. While okapi might look a little like zebras, they are in fact members of the giraffe family. They don’t have the same long neck as the giraffe, though they show some traits, such as long legs. The okapi and the giraffe show us how evolution can shape the same animal in different ways over time.

3. Giraffe’s Tongues Can Be Up to 20 Inches Long 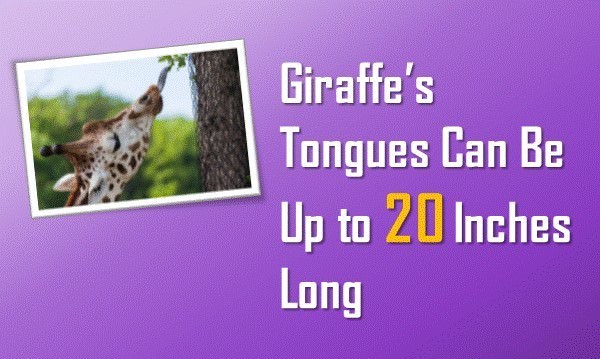 The giraffe’s long neck is the result of evolution. This trait gave the giraffe and its ancestors an advantage, as they could easily reach leaves high up in trees. Other parts of the giraffe’s body also give it an advantage in reaching leaves to eat. Evolution gives us another one of our giraffe facts: giraffes have extremely long tongues. A giraffe’s tongue can be up to 20 inches long!

4. Giraffes Can Run Over 30 Miles Per Hour 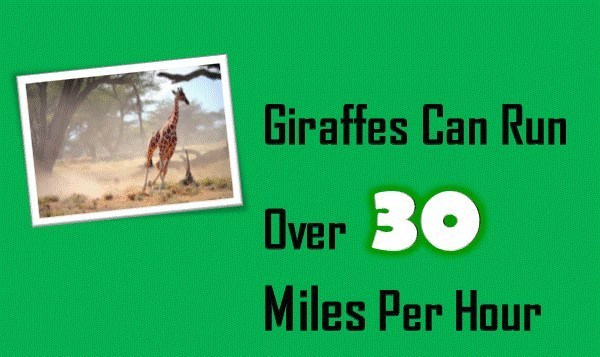 Looking at a giraffe, it doesn’t exactly look like a racehorse. We know from our amazing facts that giraffes have extremely long legs. Perhaps it’s these large pole-like legs that make us think the giraffe couldn’t possibly run fast.

One of the surprising giraffe facts is that giraffes can run over 30 miles (or 50 kilometers) per hour! This is an amazing speed for an animal that weighs nearly two tons and can be up to 19 feet tall.

5. A Giraffe Can Shatter a Lion’s Skull with 1 Kick 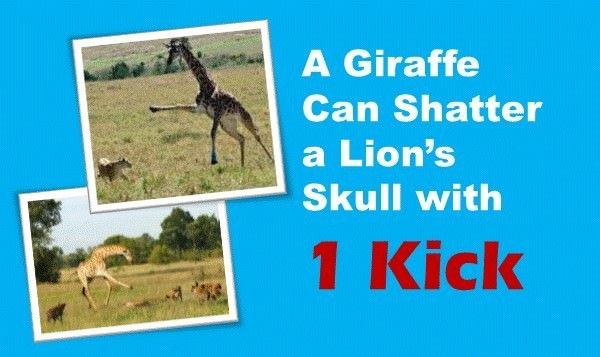 Although giraffes are some of the most impressive animals on Earth, there aren’t too many fearsome facts about Giraffes. Giraffes are mostly peaceful animals and they are not carnivores. They are herbivores that eat a diet of mostly acacia leaves, and they do not prey on other animals.

Because of their large size, and their ability to run fast, there are few animals that hunt giraffes. Lions are the only animals on Earth that are widely known to hunt giraffes. Lions, sometimes working together, will attempt to knock the giraffe off of its long legs and then attack it on the ground where it is more vulnerable.

Giraffes defend themselves by kicking towards the lion. The giraffe’s long legs may look like poles, but they are actually very powerful. A giraffe can shatter a lion’s skull and break other bones in the lion’s body with a single kick. You’d have to be one hungry lion to want to hunt a giraffe!

Younger giraffes, which are called calves, are more likely to be preyed upon than older giraffes. Another of our surprising giraffe facts is that crocodiles will sometimes attack giraffes, especially calves, when they bend down to take a drink of water. Big cats that are smaller than lions, such as leopards, will also attack younger giraffes as they are smaller than the adults and their vital areas are closer to the ground.

6. Giraffes Are Killed for Their Meat, Fur, and Sometimes Sport 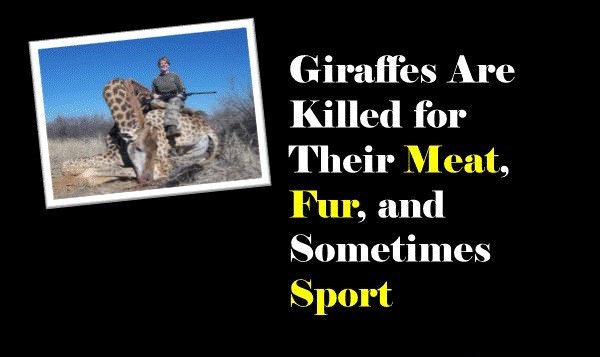 One of the saddest giraffe facts is that humans are the only animals on Earth, other than lions, that often hunt giraffes. Sadly, poaching of giraffes continues. Giraffes are killed for their meat, their fur, and sometimes even for sport.

People are currently working to raise awareness of giraffe poaching, and this is one of the more positive facts. The giraffe is currently listed on the Endangered Species list. However, it is classified as Least Concern and not listed as Endangered, like its relative the okapi.

This is positive news because we still have a chance to save giraffes for future generations. These beautiful animals evolved to fulfill a special role in nature. By learning facts about giraffe and teaching others about this magnificent animal, we can help end poaching and make sure that lions are the only animals that hunt giraffes. 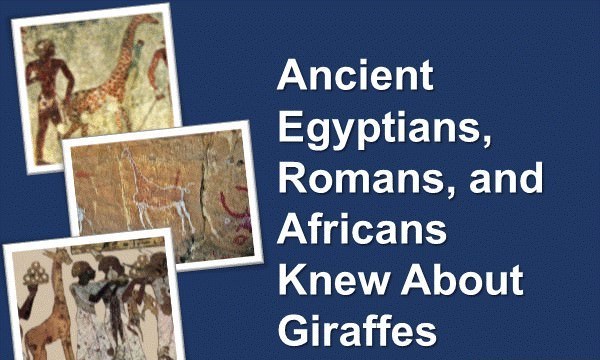 The Ancient Egyptians, Romans and Africans all knew about giraffes and there are various references to giraffes in cultural artifacts. Giraffes fascinated people then, much as they continue to do so today. There are many paintings and engravings of giraffes. In Egypt, the giraffe had its own hieroglyph.

8. A Giraffe’s Heart Can Weigh Close to 25 Pounds 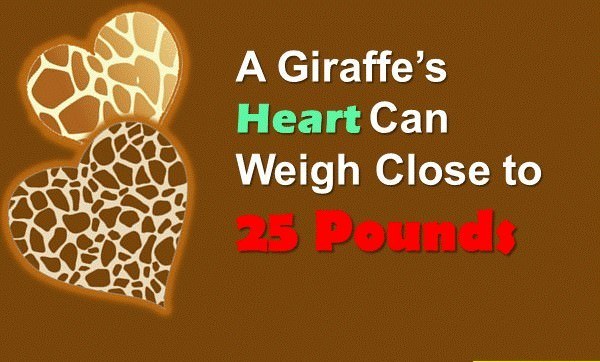 Due to the giraffe’s incredible height, the animal has an equally incredible circulatory system to manage the blood flow in its body. To pump blood up their neck, giraffes have massive hearts that can weigh over 10 kilograms – that’s close to 25 pounds!

One of the stress-relieving giraffe facts is that the blood pressure in giraffes is nearly twice that of humans. Next time your doctor tells you that you have high blood pressure, tell him that it’s not that bad compared to a giraffe!

The neck of a giraffe presents a problem for the animal when it lowers its head to take a drink. All the blood flowing to its brain from a six-foot long neck would cause the animal to die. The giraffe has adapted to this by having a special valve in its artery that stops blood from flowing to the brain when it lowers its head. This is another one of our fun facts that is the result of evolution. 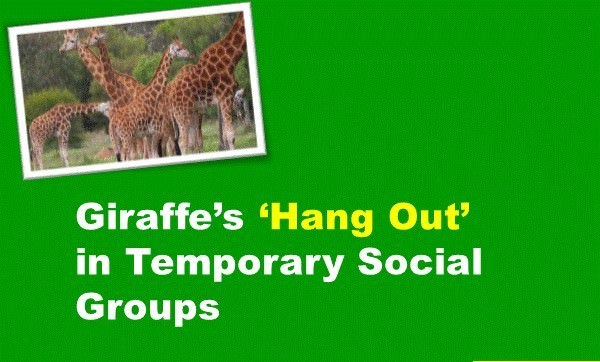 While a giraffe group isn’t as social or cohesive as an ant colony, one of the more entertaining giraffe facts is that they like to hang out together. Hang out is really a good term, because the groups that giraffes gather in are often temporary. There doesn’t appear to be any strong social bonds or hierarchy.

The violence between giraffes is typically not deadly, and one giraffe usually submits, signaling that the fight is over. The dominant male wins the fight, and chooses a female to mate with by a strange behavior. File this one under gross giraffe facts: the male giraffe tastes the urine of the female giraffe to determine whether or not the female is fertile and ready for mating.

Giraffe groups are typically made up of mother giraffes and their young. Sometimes adolescent giraffes will also be a part of these groups. Adult male giraffes tend to be more solitary, often wanderingr long distances by themselves. Perhaps some male giraffes just need their alone time!

10. Giraffes Can Run Within a Few Hours of Birth 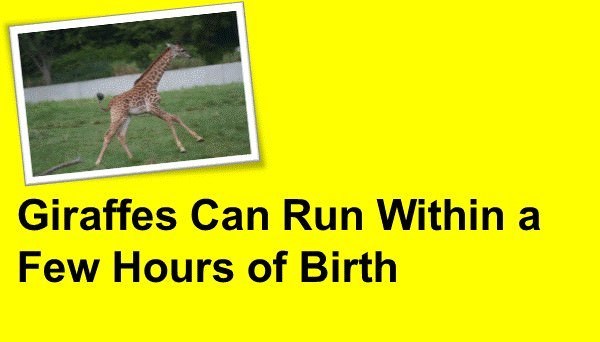 The baby giraffe stays in its mother’s womb for over one year! It’s another of our amazing facts about giraffe that giraffes can run within a few hours of being born. Perhaps because they are more easily preyed on, giraffes have evolved this ability to give them a better chance of surviving the time period after birth.

Because giraffes are mammals, baby giraffes, or calves, drink their mother’s milk after they are born. Mother giraffes do most of the raising of the baby giraffes. They also defend the calves from predators. This may explain why giraffe mothers gather in groups; it may be a defense mechanism.

Evolution has given giraffes many advantages over their ancestors and provides us with many of our interesting giraffe facts. Their long necks give giraffes the ability to eat leaves high up in the trees. Their amazing tongue has also evolved to help them eat leaves. Many of the adaptations of the giraffe are a result of its height. Giraffes have an amazing circulatory system to help keep the blood moving efficiently through their tall bodies.

Learning animal facts can help us all get excited about nature. All throughout time, giraffes have fascinated us. By learning about the way that giraffes evolved, we can learn more about the process of evolution. We should end poaching and protect the habitat of giraffes to make sure kids of all ages will be fascinated by giraffe facts for many generations.