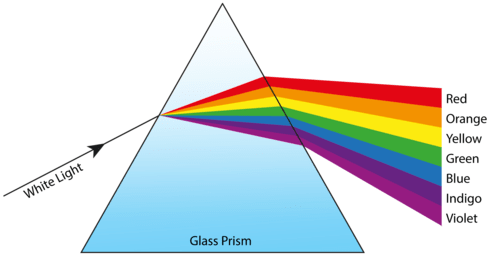 Here is a collection of most interesting rainbow facts for kids showing, how does a rainbow is formed and why does we see seven colors of the rainbow?

How Rainbow Is Formed?

We can’t see rainbow every day, you only see it when it rains, why is that and how rainbow is formed?

When it rains, the rain drops act like prisms of glass and when sunlight passes through the raindrops, it breaks up into spectrum and we see all the seven different colors of the rainbow.

Seven Different Colors of the Rainbow

The colors of the rainbow are:

You should read some interesting facts about Sir Isaac Newton.

Do Rainbow Ends Have Treasures?

According to the old Europe mythology, A place known Silesia it was said that, There is a huge valuable treasure at the both ends of the rainbow, but this treasure can be only seen by a nude man. Eastern Europe said that this treasure was placed at the rainbow ends by angels.

According to science it seems impossible because you can never find the end of rainbow, as you move toward it, it will move away from you.

If these Rainbow facts were interesting to you then you should also try reading: Weird Monkey Facts

How to Create a Rainbow at Home?

Some other Amazing rainbow facts for kids indicates that rainbows can be created at home when it is not raining, and guess what you can make the rainbow by yourself. Let me tell you the procedure:

Stand straight with your back to the SUN, and take a water hose or garden hose which is used to spray water, Use the water hose to spray in front of you without turning toward the sun, and within few minutes you will see that a small rainbow will be formed.

Remember that you must keep the sun behind your back.