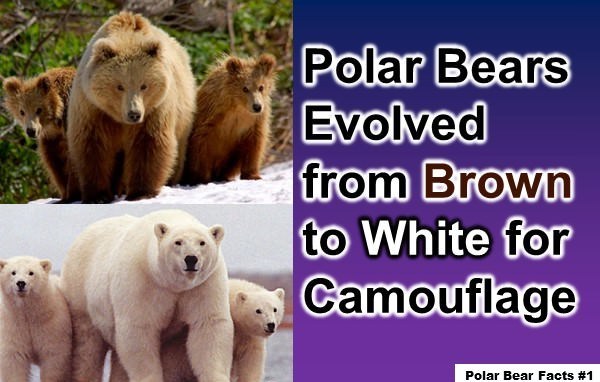 One of the surprising facts about polar bear is that the polar bear is related to the brown bear. However, polar bears have evolved a set of special traits for hunting and surviving in the cold northernmost regions of Earth.

1. Polar Bears Evolved from Brown to White for Camouflage

Perhaps the most obvious of polar bear facts for kids is that polar bears are white. It’s worth mentioning this because they are so closely related to the brown bear. The white coat of the polar bear teaches us polar bear fun facts relating to evolution.

The brown bear and the polar bear descended from a common ancestor. However, the polar bear evolved to live in the Arctic regions of the Earth. Evolution is a process of natural selection that gives genetic advantage to the members of a species that have a certain trait.

For instance, some bears who descended from the common ancestor of the brown bear and the polar bear had naturally lighter coats. These lighter coats provided better camouflage in the snow. As a result, those bears with lighter coats were more likely to survive, mate and pass on their genes to the next generation of polar bears.

2. Male Polar Bears Have Longer Hairs on Their Front Legs for Mating 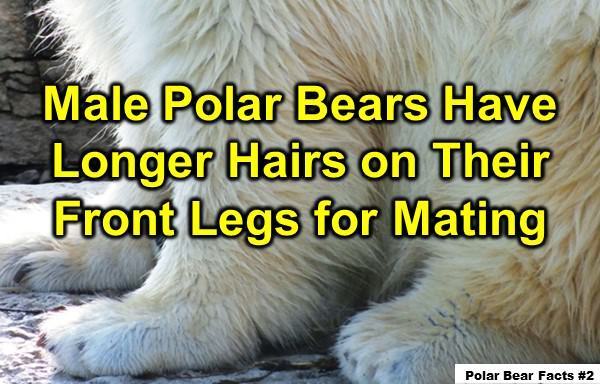 One of the surprising polar bear facts is that polar bear fur is not completely white! There is a thick layer of hair close to the polar bear’s skin that is the best pair of thermal underwear nature could provide!

Polar bears have an outer layer of fur made up of guard hairs. These guard hairs are actually hollow and transparent. As polar bears get older, their coats often yellow. Enjoy that new white suit while it’s fresh!

Another one of the interesting facts about polar bear fur is that male polar bears have longer hairs on their front legs. It’s speculated that these hairs are an important part of the mating process and are used to attract female polar bears.

3. Nice Coat! The Hair and Blubber on Polar Bears is 10 inches Thick 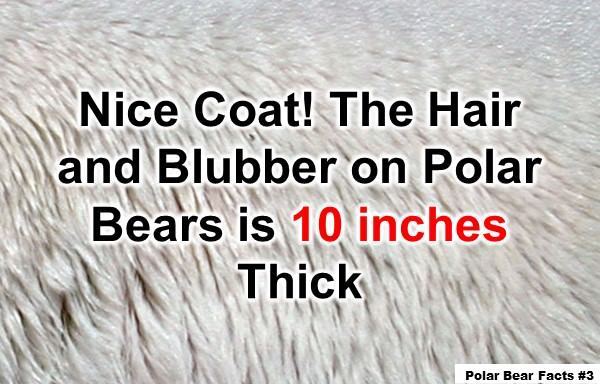 We know from our polar bear facts that polar bears have a thick layer of hair near their skin. This hair can be up to six inches, or 15 centimeters, thick!

Polar bears also have a thick layer of fat. This layer of fat, like the layer of fat found in whales, is called blubber. Polar bear blubber can be up to 4 inches, or 10 centimeters, in thickness!

Putting those two facts together we arrive at one of our polar bear fun facts for kids that tells us how well they have adapted for life in the Arctic regions. The layers of inner hair and blubber can be up to 10 inches, or 25 centimeters, thick combined!

Can you imagine wearing a jacket that was 10 inches or 25 centimeters thick? It would be hard to move around. Most houses don’t even have insulation that thick! Evolution has given polar bears the best possible winter coat nature could provide.

Another one of our polar bear facts that tells us about evolution is the difference between the claws on a polar bear and the claws on a brown bear. Polar bear claws are shorter and stouter. It’s speculated that this allows them to hold onto ice better.

Polar bears’ legs are stouter, their ears are smaller, and their tails are shorter when compared to brown bears. These traits help prevent heat loss from extremities in the harsh Arctic winters. 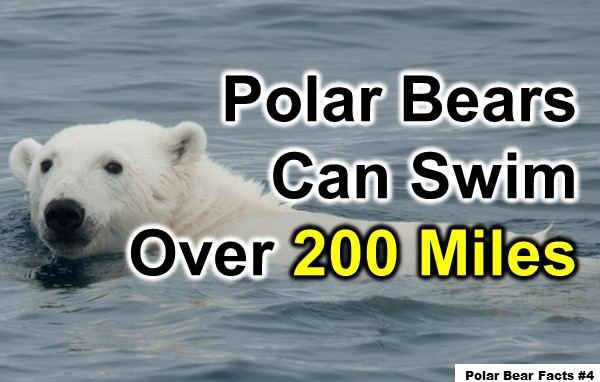 The scientific name for the polar bear is Ursus maritimus which means marine bear in Latin. Constantine John Phipps, Second Baron Mulgrave, PC, a British explorer and Captain in the Royal Navy, gave the name to the bear. Phipps recorded the first observations of the polar bear by a non-native person in 1773 and published an account of his Arctic travels in 1774.

Phipps described the polar bear’s natural swimming abilities in his account. Recent studies have shown that a polar bear can swim over 200 miles, or over 350 kilometers! These long swims may not be normal and may in fact be a result of the loss of polar ice, an important part of the polar bear’s habitat, through climate change.

With these big paddles moving the polar bear through the water, it can swim well enough to capture its main prey, seals. The polar bear’s blubber also helps to keep the bear buoyant in the water. 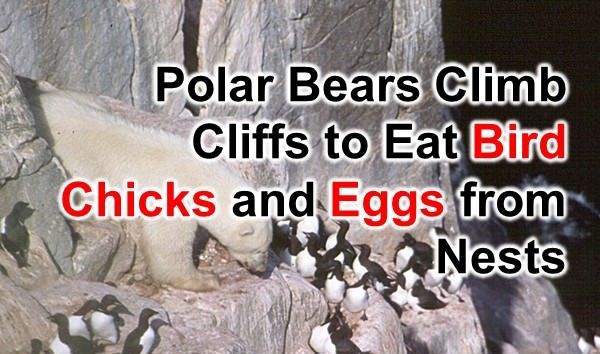 While some bears are omnivores, it’s mostly a diet of meat for polar bears! We know from our polar bear facts that polar bears are good swimmers, which helps them catch seals.

Polar bears are extremely strong and patient hunters. They will wait for hours for a seal to come up for a breath, and then they will grab it and pull it from the water to eat.

Perhaps the most surprising fact is that studies have revealed that some polar bears will climb up very steep cliffs to eat chicks and eggs from birds’ nests! In addition to seals, and the rare bird for a snack, polar bears will sometimes eat larger animals, such as walruses and whales.

A polar bear will not often attack a walrus, but some adult males do hunt them. When polar bears hunt walruses, they typically attack the weaker or younger animals.

Even less frequently, a polar bear will try to grab a whale that comes up to breathe in the same way that it grabs seals. Seals are the main part of the polar bear’s diet and the bears have become expert seal hunters.

Way down on the menu for polar bears is plants. One of the few times polar bears can be seen eating plants is when the mother polar bear emerges from her den and eats plants to replenish herself before hunting. This is one of the fun polar bear facts for kids: polar bears don’t like to eat their vegetables! 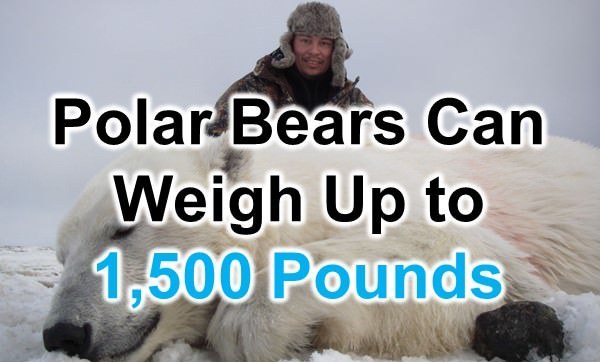 Polar bears are some of the biggest bears on Earth. Only the Kodiak bear can match the size of the polar bear. Get ready for some massive polar bear facts.

Polar bears are the longest of all bears, measuring nearly ten feet, or nearly three meters, in length! Even when they are standing on all four legs, they can measure over 4 feet, or over 1.2 meters, tall at the shoulder!

On that large frame, the polar bear carries a huge amount of weight. Adult male polar bears can weigh up to 1,500 pounds, or up to 700 kilograms! Female polar bears are generally a little smaller, at a dainty 1,100 pounds!

There have been reports of polar bears weighing over one ton, or over 1,000 kilograms!

7. Ursus Maritimus Tyrannus Was a Giant Polar Bear 70,000 Years Ago 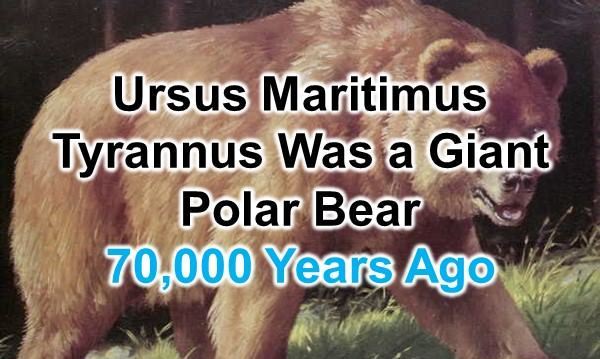 File this one under hard to imagine polar bear facts. Fossils have been uncovered that may show an ancestor of the polar bear that was even bigger than modern day polar bears! Ursus maritimus tyrannus was a massive bear that lived approximately 70,000 years ago.

One of the interesting facts that is debated is when polar bears and brown bears separated from each other as a species. Depending on which account you follow, the fossil of Ursus maritimus tyrannus may be a brown bear fossil.

Scientists compare the DNA from different bears to determine when certain evolutionary traits emerged and a new species was born. Estimates for the divergence of brown bears and polar bears range from 100,000 years to 4 million years ago!

When mating occurs, it’s often between Kodiak or Grizzly brown bears and polar bears. This mating produces a grizzly-polar hybrid. That would be one fearsome bear! 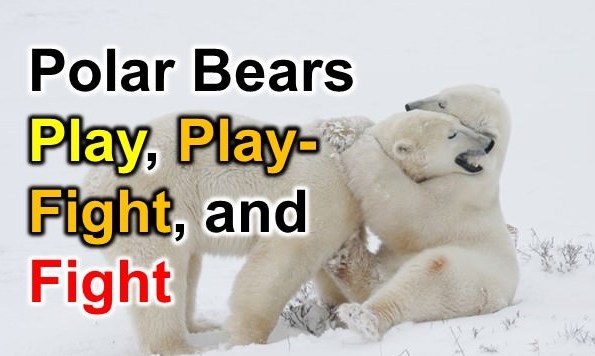 They are fearsome predators, considered by some to be the largest predator on land. Polar bears learn to hunt and fight from a very young age.

Before the family migrates to the sea for hunting, the polar bear family will play near their den for about two weeks. Polar bear cubs will play with each other. Seeing images of polar bears cubs playing in the snow is one of the cutest scenes in nature. We almost want to pick up the polar bears and play with them. However, polar bear mothers are extremely protective of their young, so that wouldn’t be a good idea!

Polar bear cubs will stay with their mother and watch her hunt until they are two or two and half years of age. At this point, the mother will chase them away or abandon them so they can learn to live on their own. This is one of the sad polar bear facts that people sometimes struggle to understand. However, it’s vital to a cub’s survival that the mother abandons it so that it can learn to fend for itself.

Young adult polar bears will play-fight with each other to learn how to fight when they are adults. Some scientists have described these mostly isolated bears as being very friendly with each other! 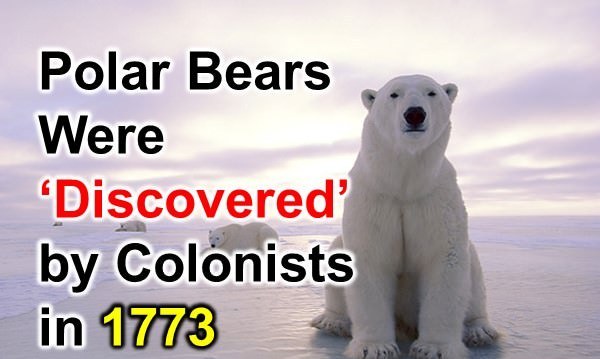 The first polar bear facts were established in 1773, which is relatively recently compared to how long we’ve known about many other animals. However, native people have been establishing polar bear facts, myths and stories as part of their cultures for thousands of years.

Native people in the Arctic regions, including the Yupik, Inuit, and other groups, hunted and respected the polar bear. Many cultural artifacts carry depictions of the polar bear.

Given the polar bear’s large size and its role as a predator, it is no surprise that indigenous people elevated the status of the polar bear.

10. Polar Bears Upgraded to Vulnerable on the Endangered Species List 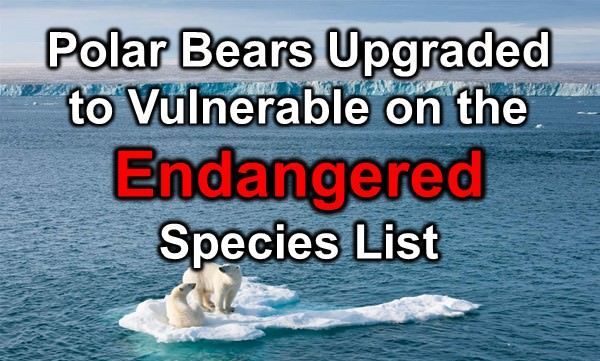 The saddest of all polar bear facts is that commercial hunting in the last 100 years has greatly impacted the polar bear population, which was healthy and had survived thousands of years of subsistence hunting by native people.

Polar bears are now listed as Vulnerable on the Endangered Species list. This is due to both poaching and to the effects of climate change. Like the cheetah, polar bears are very specialized for their habitat. Climate change is melting the sea ice that we know from our polar bear facts is the polar bear’s primary hunting ground for seals.

As the sea ice melts, polar bears are looking elsewhere for food, and increasingly interacting with brown bears. Only time will tell how long the white coat of the polar bear will continue as a trait. When the ice melts and there is no longer a steady winter in the Arctic, a white coat would no longer be good camouflage!

The polar bear may be the largest predator to walk on the land. This is one of the ironic polar bear facts because the scientific name of the polar bear means marine bear or ocean bear.

With some records of polar bears weighing over one ton. You wouldn’t want to be caught on Arctic sea ice alone with a polar bear! In the unfortunate event you were, you might wish you had the nearly 10 inches of blubber and fur that the polar bear has as its winter coat.

The impact of climate change on polar bears is only now beginning to be understood. This beautiful beast evolved from a common ancestor with the brown bear to develop special traits for living in the Arctic.

Only time will tell. Our actions can make a difference as to whether or not there will be an Arctic habitat for the polar bear in the future. You can get involved by supporting a wild life conservation group, by never buying items made from polar bear fur or claws, and by teaching kids important polar bear facts. When we teach kids polar bear facts, we give them a big reason to get excited about learning and protecting the environment!