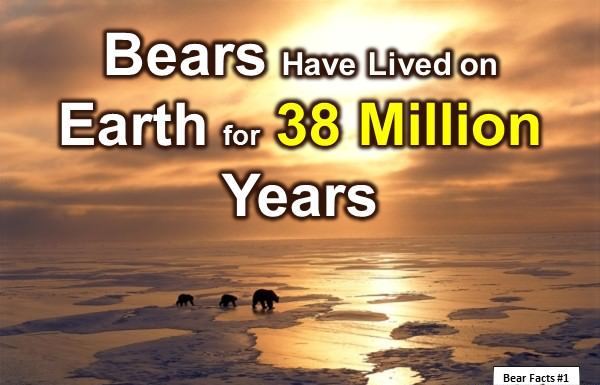 While there are only 8 species of bear in the world, bear facts show there are a surprising variety of bears living in different habitats. There are no bears in Australia or Africa. However, bears can be found in North America, South America, Asia and Europe.

Some bear species are threatened by loss of habitat. The panda bear and the spectacled bear both have fragile population numbers due to the destruction of their habitat. In recent years, scientists have been more successful at breeding panda bears in captivity.

Facts about Bears also show that bears have been a part of human culture all throughout recorded human history. Even today, popular children’s shows and games often feature bears as prominent characters.

1. Bears Have Lived on Earth for 38 Million Years

For over 30 million years, bears in one form or another have roamed the Earth. Bear facts show us that there are only 8 extant species of bear on Earth now. Bears live all over the world, and the different species inhabit various geographic regions.

According to bear facts derived from genetic and fossil information, the current living family of bears separated from the ancestral line of bears approximately 20 million years ago. This is when the first lineage of bear species that are alive today emerged.

Further facts show that the ancestor of the panda bear was the first living lineage of bear species to emerge. These facts are based largely on genetic evidence. Scientists have yet to find a panda bear fossil more than 5 million years old.

2. There Are Only 8 Species of Bear 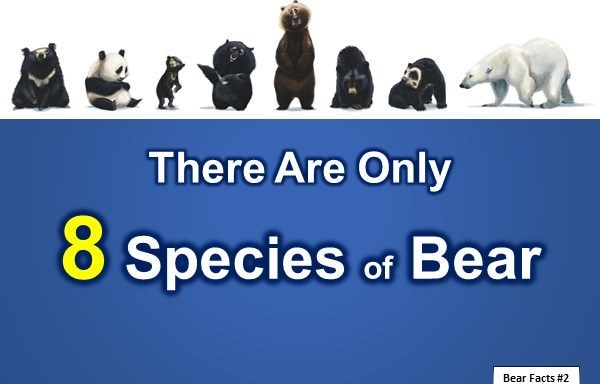 Our science tell us there are 8 species of bear that are alive today:

North American Black Bear – Bear facts tell us that the North American black bear has a wide ranging habitat from as far north as Canada and Alaska, to as far south as Florida.

Polar Bear – We don’t need facts about bear to tell us that the polar bear is the favorite bear of many people. They have evolved to have a white coat that provides camouflage in the arctic environments they inhabit.

Asiatic Black Bear – North America is not the only continent that has a black bear. Bear fun facts teach us that the Asiatic black bear lives in Eastern Asia, in countries such as Korea, Taiwan and Vietnam.

Panda Bear – interesting facts can’t help us decide which is the cutest bear, but the panda bear certainly has a good chance of winning the title. It took a DNA analysis to confirm that panda bears are indeed a part of the bear family. This is one of the facts about bear for kids that provides surprising insight into the range of adaptations that evolution has given different species of bear. Most bears eat a combination of meat and plants, meaning they are omnivorous. The panda bear, unlike any other bear, eats exclusively bamboo, which is native to the regions it inhabits.

Spectacled Bear – The spectacled bear is another contender for the cutest bear. When we look at facts about the spectacled bear, we learn that it lives in the Andes Mountains. For this reason, it is often called the Andean Bear.

Sun Bear – If the famous character Winnie the Pooh were to choose a favorite bear, the sun bear might be it. Sun bear facts for kids teach us that sun bears in Malaysia are often called honey bears due to the fact that they love to eat honey.

Sloth Bear – The sloth bear was a little slow to arrive for the count of bear species, but it made it to our list. These bears primarily eat insects and this provides another opportunity to teach us about evolution. Sloth bears evolved from brown bears to have special adaptations, including a special lower lip and palate for sucking up bugs.

3. The Koala Bear Is Not a Bear – There Are No Bears in Australia 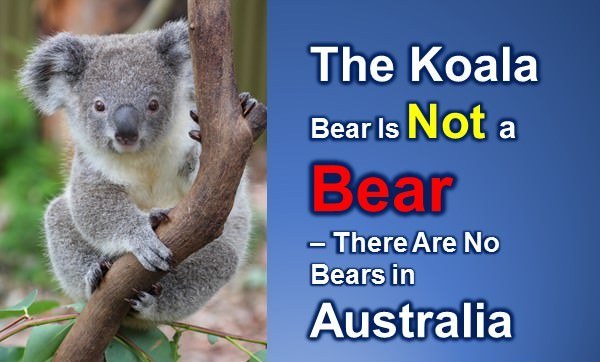 While it may have the word bear in its name, the koala bear is not actually a bear. The koala bear is a member of the marsupial family. Fun facts about Bear tell us that while bears are great swimmers, no bear ever swam to Australia and started a family.

According to bear facts, the closest bear geographically to Australia is the sun bear that can be found in Indonesia. The sun bear can also be found in Japan.

4. The Last Bears in Africa Went Extinct in the Late 1800s 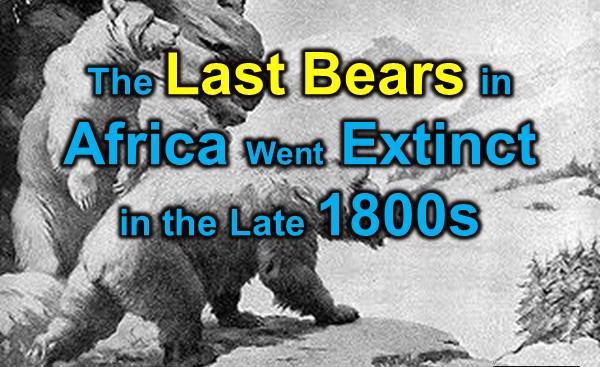 While bears did live in the Atlas Mountains of Africa for a period of time, there are no species of bear living in Africa at this time. The so-called Atlas Bear lived in Northern Africa up until a few hundred years ago. Scientists today believe the Atlas bear to be extinct.

The extinction of the Atlas bear is one of the interesting facts from history. The Roman Empire used many animals from Northern Africa to fight in spectacular competitions. From records, it seems thousands of bears were taken and made to fight with other animals like lions and tigers, and even against gladiators.

Bear facts show that the environment also had an impact on the extinction of the Atlas bear. As the desert in Northern Africa expanded, it reduced the woodland habitat where the Atlas bear lived.

By the late 1800s, the Atlas bear was extinct. This shows humankind can play a role in the extinction of a species. 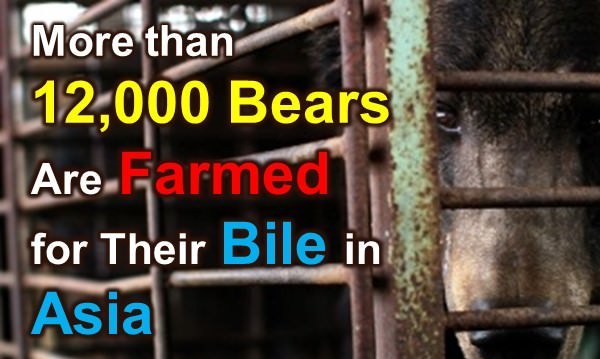 Bears occupy an important place in folklore in many cultures. Bear meat has been a part of the human diet for as long as humans have hunted. Bear facts teach us that other parts of bears are also used in different cultures for specific purposes. Some of these purposes are for rituals; for instance, bear claws are used as part of native ritualistic garments and artifacts.

Bear facts also teach us about the use of bears for medicinal purposes. In traditional Chinese medicine, the bile secreted from the gallbladder of bears is used in certain treatments. Over 12,000 bears are farmed for their bile in China, Vietnam and South Korea. Many wildlife advocates are concerned about how bears are treated on these farms.

6. The Largest Bear Is 30 Times the Size of Smallest Bear 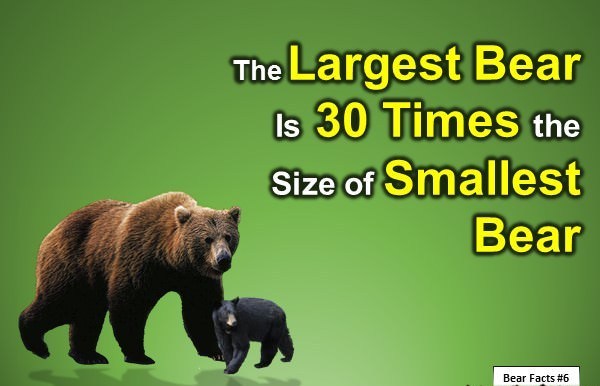 While there are only 8 species of bear in the world, bear facts teach us that evolution has allowed bears to adapt in various ways for different environments. While most bears live in forests, the polar bear lives in the icy conditions of the Artic.

7. Skinned Bear Paws Have Been Confused with Human Hands 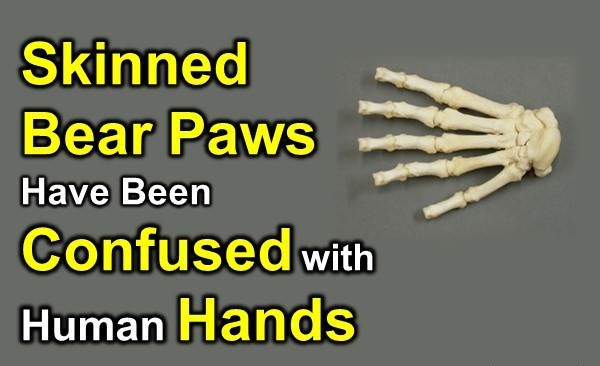 Bear facts teach us that the structure of the human hand and the bear claw are very similar. The bone structure is so alike, that the National Fish and Wildlife Forensics Laboratory published a special guide to help people tell the difference.

Some disturbing facts show that people sometimes put bear paws out in public to shock other people. Also, bear remains have been found during excavation or construction, shocking workers and halting work on the job site. The National Fish and Wildlife guide helps people quickly identify the remains by highlighting the subtle differences between bear paws and human hands. This can allow construction to go forward without delay, and help put people at ease after discovering a bear paw left out publicly or in the refuse of a taxidermy business.

Polar bears may look nice and clean because of their white fur. The dirty truth is they have stinky feet! Recent bear facts published in the Journal of Zoology teach us that polar bears use their feet to leave scent markings.

Polar bears have a very large territory, and scientists believe that a combination of sweat glands on their paws, and using their paws to grind urine into the snow and ice, is a convenient way to mark their territory. This means polar bears are marking their territory simply by walking around.

Bear facts teach us that most bears mark their territory by rubbing their backs against trees. However, polar bears have relatively few trees in their natural habitat in the Arctic. Scientists speculate the environmental conditions prompted polar bears to adapt to another method of scenting their territory.

9. There Are Fewer than 3,000 Spectacled Bears Alive 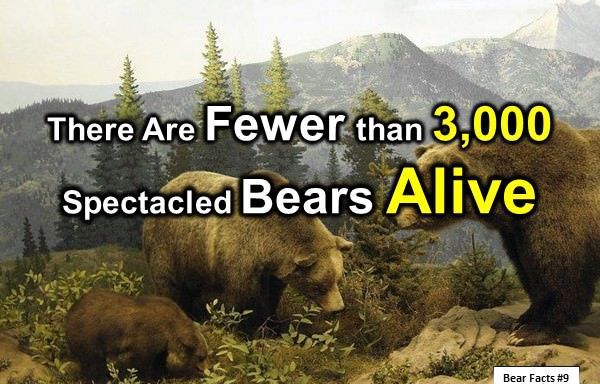 Recent animal facts also tell us about the troubling story of the spectacled bear, or Andean bear. The spectacled bear is the only bear that lives in South America and the species is classified as Vulnerable to Extinction on the Endangered Species List.

The spectacled bear makes its home in the Andean jungles. This habitat is currently being devastated by human development. Spectacled bears are also killed by farmers who see them as pests, and are poached for their meat and claws.

With fewer than 3,000 alive in the world today, we need to act soon before spectacled bears suffer the same fate as Atlas bears.

10. Baby Pandas Are Blind, Hairless and 1/900th the Size of the Mother 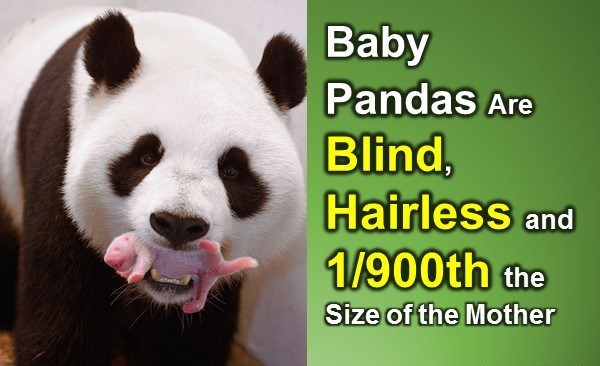 Scientists have been breeding panda bears in captivity since at least the 1960s to help stabilize the fragile panda bear population. Many advances have been made, and many new bear facts have been revealed.

Breeding panda bears in captivity is a difficult task. Scientists have learned many panda bear fun facts relating to when panda bears are most fertile, and how to help them care for their young.

Baby panda bears are tiny fragile creatures. They are blind, hairless and only 1/900th the size of the mother. Pandas International compares the size of a baby panda bear to a stick of butter.