Penguin facts teach us about these majestic birds, of which the emperor penguin is the largest of all. Penguins evolved over 60 million years ago from birds who flew through the air in to birds who swam through the water.

While giant penguins no longer roam the Earth, as they did up until 25 million years ago, penguins continue to hold a prime spot in our love of nature. While many penguin species are thriving, some are listed on the Endangered Species list. The best way we can ensure we continue to have fun penguin facts for kids now and in the future, is to protect their natural habitat in the Southern Hemisphere, including Antarctica.

1. Penguins Lost the Ability to Fly 62 Million Years Ago 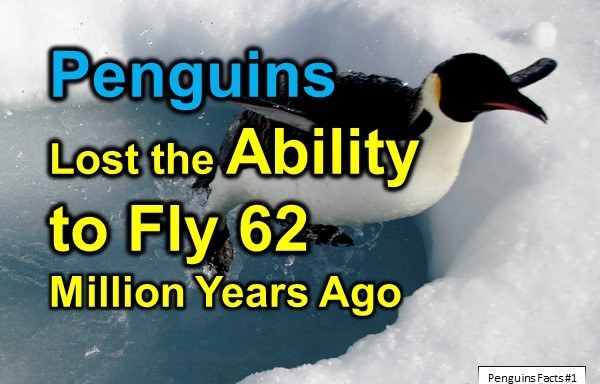 Penguin facts for kids tell an interesting story about a bird that once flew, and then evolved to become a better swimmer, but lost its ability to fly in the process. One of the most amazing penguin facts involves just how long ago penguins began evolving towards life in the water and lost their ability to fly.

The oldest fossil of a penguin species dates from over 60 million years ago! Penguin facts show that this penguin had already lost the ability to fly. While it was not as well adapted to marine life as today’s penguins, it is definitely a penguin ancestor.

Scientists speculate that these ancient penguins swam mostly on the top of the water. However, their wings had already evolved to be better used as flippers in the water and the bird could no longer fly. 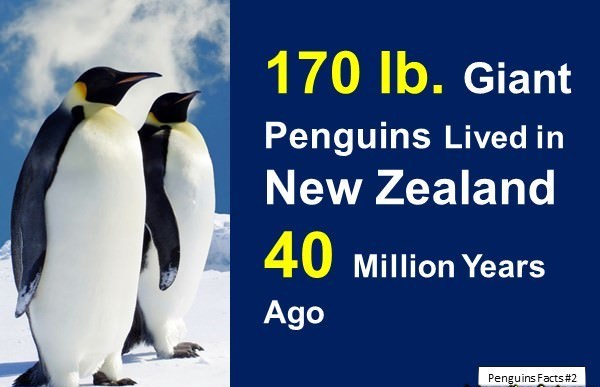 Giant penguin fossils have been found in New Zealand. These penguins lived 40 million years ago and were nearly 6 feet tall and weighed over 170 pounds! Scientists don’t know whether this was a separate lineage of penguin or simply the result of environmental factors. It may have been that there was an abundance of food available with few competitors, so the penguins grew larger.

Competition from other marine animals, such as the whale species emerging at the time, eventually displaced the giant penguins and they became extinct approximately 25 million years ago.

3. Don’t Get Any Blood on That Tuxedo! Penguins Are Carnivores 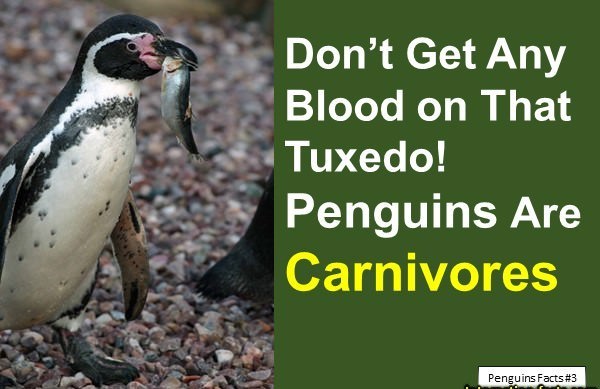 Penguin facts can tell us a lot about these flightless birds. One thing we know without penguin facts is that these creatures are well loved by children and adults all around the world. There’s something about the well-dressed tuxedo look of some species of penguins that draws us to them. Many children’s movies and cartoons feature penguins as prominent characters.

Make no mistake, these cuddly-looking creatures are carnivores! This means that penguins eat only meat, and no vegetables. Penguins survive on a diet of mostly fish. They also consume other marine animals, including squid and octopus. This diet is partly a result of the region of the Earth they inhabit. Nearly all penguins live in the Southern Hemisphere, and many live in the Antarctic where there is little to no vegetation.

Penguin facts show that although penguins are predators, they are also prey. Penguin chicks can be eaten by other birds when they are smaller and more vulnerable. Adult penguins can be preyed on by leopard seals and killer whales, or orcas. We know from our dolphin facts that the orca is an apex predator. Given that the penguin is preyed on by the orca and few other animals, it is very near the top of the marine food chain.

4. Penguins Can Withstand −40 °F by Working Together in Heat Packs 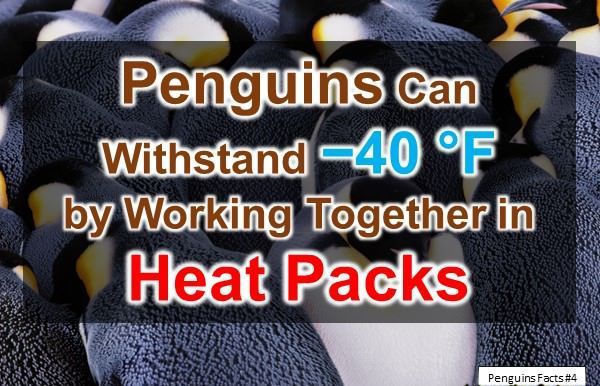 Emperor penguin facts tell us about this species that endures the harsh climate of Antarctica. Penguins have many special adaptations for living in cold weather. They have a thick layer of feathers that acts as insulation, and they can also control the flow of blood to their extremities, maintaining just enough blood flow to keep those body parts from freezing.

Penguin facts reveal a unique behavior of penguins that demonstrates their ability to work together as a group to provide benefits to each individual. During the coldest months of winter, after the mother emperor penguin lays her egg, she goes hunting while the father stands over the egg to keep it warm.

Temperatures during this time in Antarctica can reach −40 °F, with winds near 90 miles per hour! To stay warm, the male penguins huddle in so-called heat packs that allow them to maintain their individual body temperatures by creating a shared thermal envelope that protects the group.

Penguin facts show that this behavior goes beyond simply huddling in groups to stay warm. The penguins rotate position so that each penguin gets a chance to be in the middle of the heat pack where it’s warmest, and no penguin has to stay in the coldest part of the heat pack, on the outside exposed to wind, for too long. 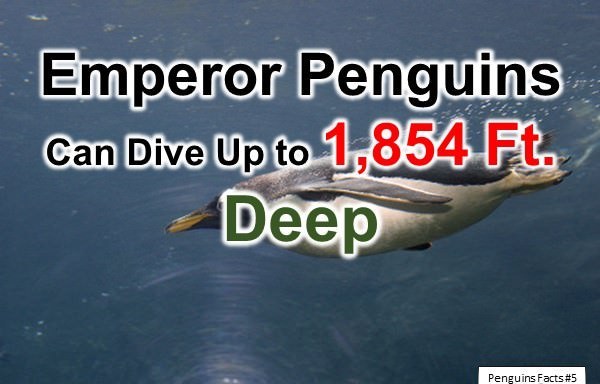 Many interesting penguin facts are about emperor penguins because this species is the largest penguin that’s alive today. Their large body size allows them to go to extremes that other penguins cannot.

For instance, when it comes to diving, emperor penguins are capable of diving to depths of 1,854 ft. in search of fish and squid to eat.

To compensate for the extreme pressures at these depths – up to 40 times the pressure at the surface – emperor penguins have special adaptations. Their bones are solid instead of air-filled, like other birds, to reduce barotrauma.

During deep dives, penguin facts show that the emperor penguin’s heart rate drops to 15-20 beats per minute to conserve oxygen. The emperor penguin’s blood also has special properties that allow the bird to continue to function with very little oxygen.

6. Penguins Can Drink Salt Water and Not Get Sick 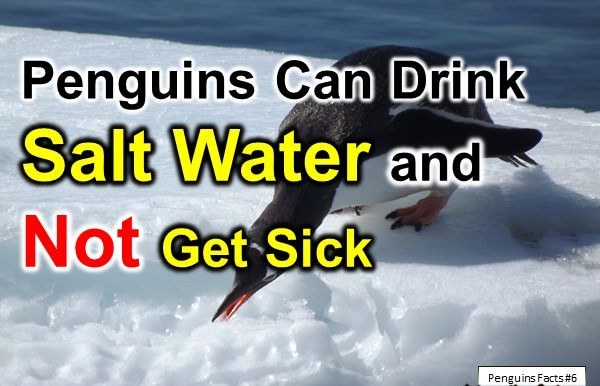 Penguin facts show us the unique ways in which these animals have developed to survive extreme cold and the extreme depths that some species are capable of diving. Let’s face it, these are some tough birds. They can dive over 1,000 feet deep and withstand temperatures 40 degrees below zero!

It seems that penguins are tough inside and out. Their digestive system has unique features that allow the bird to survive and thrive in its marine lifestyle. Penguins have a supraorbital gland, which is a gland that filters out sodium chloride from the blood stream. In other words, the gland filters salt out of the blood. This allows penguins to drink salt water when they are thirsty! Don’t try that if you get stranded on a desert island, however – it would kill you! 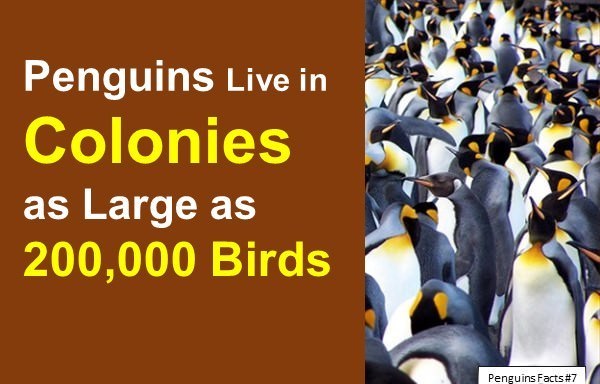 Emperor penguin facts have shown us the unique behavior of the male penguins who huddle in heat packs to stay warm in the frigid Antarctic winter. Penguins are social animals, and they like to hang out!

Emperor penguins live in colonies that number into the thousands, but interesting penguin facts shock us with the real party-animals of the penguin order: macaroni penguins. Macaroni penguins can group in colonies of several hundred thousand birds at once! That’s not a party – that’s a festival!

As a result of living in these large groups, penguins have adapted many unique vocalizations and displays to communicate with other birds. Hey, when you’ve got to make it to Stage 5 for your favorite band at the festival, it helps to know how to say “excuse me”!

Penguin facts don’t suggest that penguins have developed language of this complexity, but they do have a number of displays which accompany mating. These displays occur between male and female penguins and between male penguins that may be competing for the same female.

Emperor penguins are the fifth heaviest bird species on Earth. During the cold winter months while they protect their one egg, father penguins can lose 25% or more of their bodyweight. Penguin facts show that despite this effort to protect the egg, only 19% of emperor penguin chicks survive their first year of life.

Emperor penguins live on average to be 20 years old, with scientists speculating that some individuals may live as long as 50 years. As a result of a long life expectancy and the high infant mortality rate, 80% of the emperor penguin population is five years or older.

9. There are No Penguins that Live in the Northern Hemisphere

Penguin facts teach us that penguins only live in the wild in the Southern Hemisphere. The only penguins that ever enter the Northern Hemisphere are penguins living near the Galapagos Islands who may travel north to feed.

When penguins were first discovered, they were mistakenly thought to be auks. Auks are northern birds which share some similarities in appearance with penguins. However, they are completely separate animals. At one time, there were flightless auks that had similar traits as penguins. Modern auks are capable of flying, but they are not the most majestic birds in the sky.

When scientists examine penguin facts, they find that auks are actually a separate animal that shares traits with penguins due to convergent evolution. This means that auks and penguins evolved similar traits at the same time, but not through a process of breeding with each other. They developed the similar traits separately, in response to the similarities of the Arctic and Antarctic environments.

If these facts about penguins are awesome to you then you should also read: Interesting facts about jackie robinson as well as Facts about Bermuda triangle 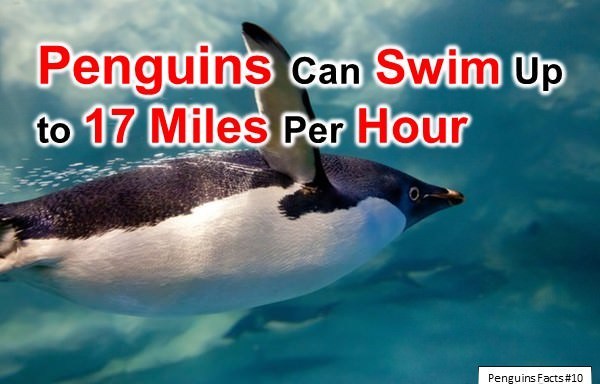 What evolution took away from penguins in terms of flight, it gave back in swimming ability. Penguins facts tell us that their vestigal wings are now powerful flippers that can propel them through the water at incredible speeds.

Penguins typically idle around at 4-7 miles per hour. But, when an orca or leopard seal is stalking them, they step on the gas and can hit speeds as high as 17 miles per hour!

Another benefit of evolution is their streamlined body. This helps the penguin swim fast, and to expend less energy on swimming when it’s not being chased by a killer whale.