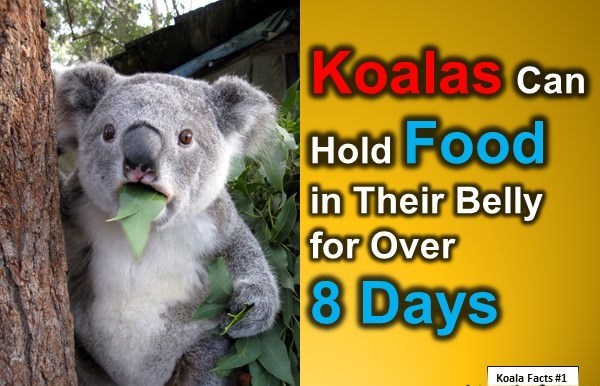 Koalas are not bears, that doesn’t mean these aren’t interesting and amazing creatures, there are many interesting koala facts to blow your mind. By some estimates, the Koala is associated more with its home Australia then its fellow marsupial, the Kangaroo. Koala facts tell us about the nutrient-poor diet of the Koala who eats mostly leaves from the Eucalyptus tree, but also eats leaves from other trees such as the Acacia tree.

As a result of this nutrient-poor diet, the Koala has many adaptations including one of the smallest brains compared to body mass of any mammal. While native tribes in Australia respected the Koala and its habitat, European settlers did not. Millions of Koalas were killed in the 1800’s and early 1900’s. While the Koala is a Protected Species in Australia, the Eucalyptus tree is not protected and as more of these trees are cut down, the numbers of Koalas are reduced.

1. Koalas Can Hold Food in Their Belly for Over 8 Days

Koalas eat a diet primarily of Eucalyptus leaves. To get more energy out of this diet, the Koala ferments part of what it eats in its gut. Interesting facts about Koala teach us that the Koala doesn’t ferment the Eucalyptus leaves in its stomach. The fermentation occurs in the organs after the small intestine in the digestive process, the large intestine and the cecumthat connects the large intestine to the colon.

While the Koala is brewing its own special brew, bacteria are breaking down the vegetative matter and releasing more nutrients that the Koala absorbs for energy. Despite this extra energy, the Koala has a relatively poor diet. Koala facts show that the animal has evolved to have a lower metabolism and smaller brain size to compensate for its nutrient-poor diet.

2. Koalas Really Love Only 30 of the 600 Varieties of Eucalyptus 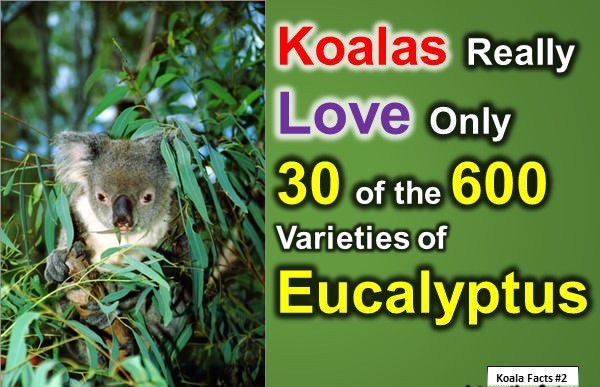 It’s a common myth that Koalas only eat Eucalyptus leaves. Koala bear facts teach us that Koalas actually eat from a number of trees including Melaleuca and Acacia. However, the Koala’s diet is primarily made up of leaves from the Eucalyptus tree.

Koalas get a lot of the water they need from the food they eat. Female Koalas can survive on the water from the leaves they eat alone! This is one of the most amazing Koala facts for kids. Male Koalas need to drink a little more water than their diet provides. 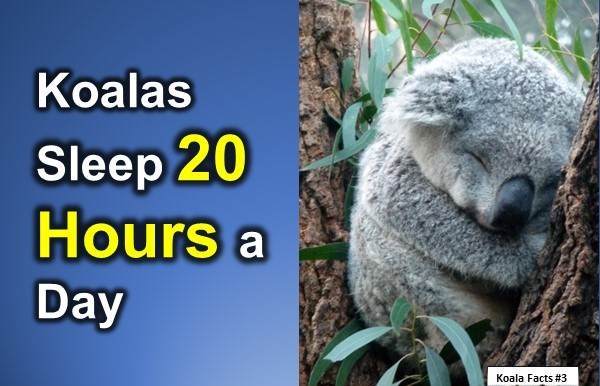 Wow, we thought cats really knew how to nap! Cat facts tell us that cats sleep up to 16 hours a day. Well the Koala has got that beat. Koala fun facts awaken us with the shocking truth that Koalas sleep longer than cats, 20 hours a day!

This one of the true facts about the Koala that is due to the nutrient-poor diet of the Koala. The Koala has adapted to expend very little energy. One of the ways it does this is by only foraging 4 hours a day. The rest of the time, the Koala is taking one big siesta.

When it comes to looking for a place to nap, the Koala doesn’t look very far. Most Koalas will eat and sleep in the same tree. Perhaps this explains why Koalas are so often photographed. They’re in the same tree for over a day, and not moving very much.

4. Koalas Only Spend 15 Minutes a Day Hanging Out 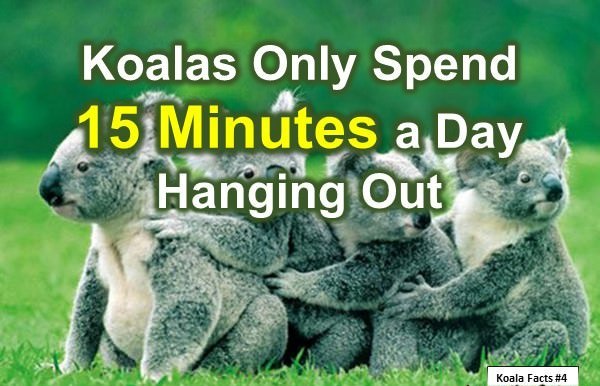 Sometimes being social can take the energy out of you! Koala facts show us that Koalas are not classified as social butterflies in the animal kingdom. Koalas only spend 15 minutes a day in social activity.

Perhaps sleeping for 20 hours a day and foraging for the other 4 hours, there’s not much free time in the Koala’s schedule for chitchat. This is not for lack of overlap in territory or opportunities. Koala territories generally overlap and there are residents who stay in the same territory, and transients who move from territory to territory.

Despite their cuddly appearance, there can be fierce competition for mating rights between koalas and at the fringes of territorial boundaries. There are some funny videos on the Internet showing fighting koalas that have gone viral. These videos capture some of the strange noises these animals make. Mother koalas are also known to be incredibly fierce.

5. There Are 40 Compounds in the Chest Gland Secretions of Koalas 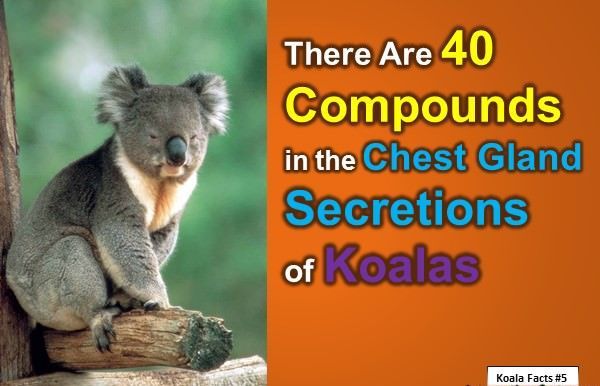 Koala facts show us that they don’t do a lot of communication in realtime. Koalas only spend 15 minutes a day involved in social activity. However, they have complex scent-marking behavior that they exhibit in their normal activity and during aggressive encounters.

When a male Koala checks out a new tree, he’ll start by smelling the bottom of the tree for any scent markings left by other males. Then, he’ll climb up the tree and rub his chest on the tree, marking the tree with the secretions of his chest gland.

There are 40 different compounds that have been identified in the secretions of the Koala’s chest glands. This is one place to look for interesting Koala facts in the future. As scientists are able to identify and analyze the different compounds, we may learn that Koalas have a more complex social life. It’s simply not conducted through realtime interactions.

In addition to the secretions of the chest gland, male Koalas have also been observed dribbling urine onto trees as another means of marking the tree.

6. Koalas Are Born Only 30 Days After They Are Conceived 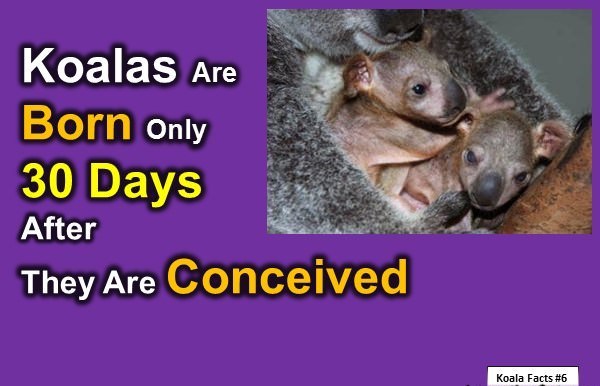 Koalas, like Kangaroos, are marsupials, and they have short gestation periods. This means that the babies are born relatively quickly after conception and are much less developed compared to newborns of other large mammal species. Our Koala facts tell us that a Koala is born only 33-35 days after being conceived.

When a Koala is born it is blind, and hairless. However, mother Koalas have a pouch in their body that protects the newborn as it continues to develop for another 6 or 7 months. In the pouch is the teat of the mother. The Koala starts with a diet of milk.

Perhaps one of the weirdest Koala facts is that before the baby Koala leaves the pouch, the mother weans it from milk by feeding it some of the fermented vegetative matter from her cecum, an organ that connects the large intestine and the colon.

7. The Koala Was Discovered by Westerners in 1798 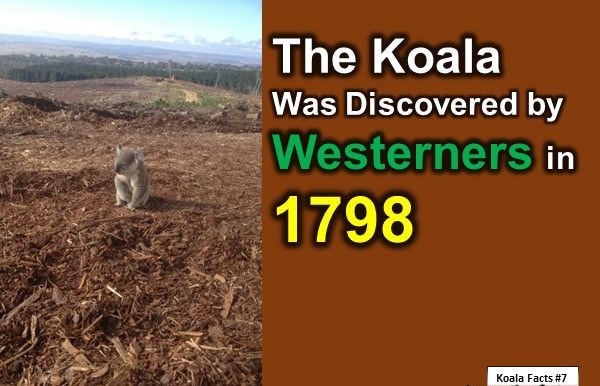 The Koala has been a part of native culture in Australia for thousands of years. Many myths and legends from the Aboriginal culture in Australia were based on the Koala. Given their lack of movement, staying in one tree all day, and sleeping for 20 hours a day, Koalas were an easy source of food.

However, native tribes in Australia did not hunt the Koala into submission, and Koalas were abundant all over Australia until Europeans arrived in 1788. Koala fun facts tell us that the first written account of the Koala was by John Price in 1798.

At first the Koala was though to be a bear, and its scientific name phascolarctos cinereus means gray pouched bear. It was later recognized that Koalas are part of a special group of animals found mostly in Australia and New Guinea, known as marsupials. After this, there were no Koala bear facts and only Koala facts. 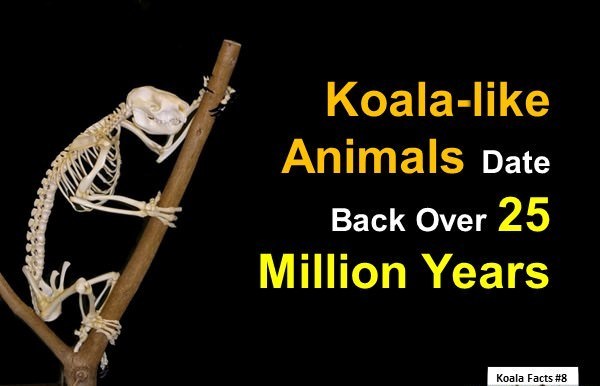 The Koalas we know now are very specialized herbivores who have adapted for a nutrient-poor diet in a dry environment. Koalas get most of their water from the leaves they eat, and they lead relatively inactive lives.

9. Koalas Were Extinct in South Australia by 1924 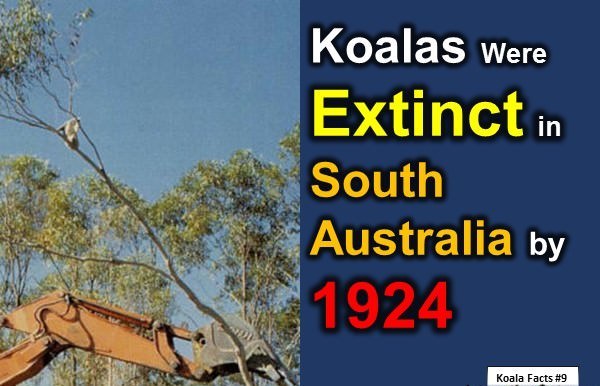 Koala facts show that when European settlers arrived, they were not as kind to the Koala as the native people of Australia. The Koala was seen as a source of fur and millions were shot up until the 1930’s. Considering the low level of activity of the Koala due to its nutrient-poor diet, it must have been more like target practice than hunting.

Some of the saddest facts about Koala have to due with shooting of Koalas in the early 1900’s. In a six month open hunting season in 1919, 1 million Koalas were killed. In 1927, a similar season was opened and 800,000 more were killed. The numbers overwhelmed the public and the Koala was given status as a protected animal before 1940. Unfortunately, there are no laws that protect the Eucalyptus trees on which the Koalas depend. For the remaining areas where the Koala lives, the main threat to the animal is the loss of the Eucalyptus trees. 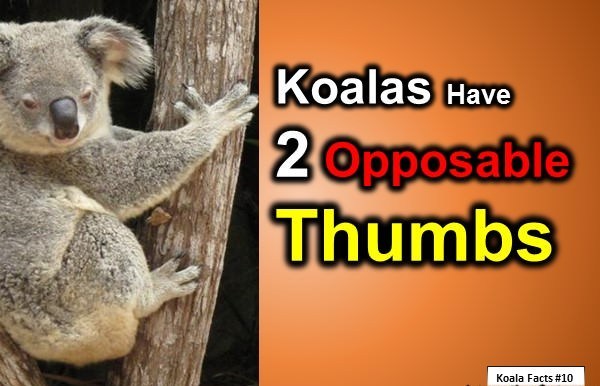 Interesting facts about Koala tell us that koalas are specially adapted for life in the trees. While not technically classified as thumbs, koalas do have two opposable digits on their hand. Their remaining three fingers are on the other side, giving them a total of five digits in their claws, just like a human hand. Having two thumbs gives you a good grip on a tree!

There are additional traits of the koala that make it especially adept at climbing. Koala facts show that the animals have a short muscular body with longer upper limbs to help them climb. The koala’s muscles in its hind limbs are attached lower down on the leg bones compared to other animals. As the fore limbs grip the tree, the hind limbs provide power to propel the koala up the tree.

If these koala bear facts were amazing to you then you should also read: Facts about love