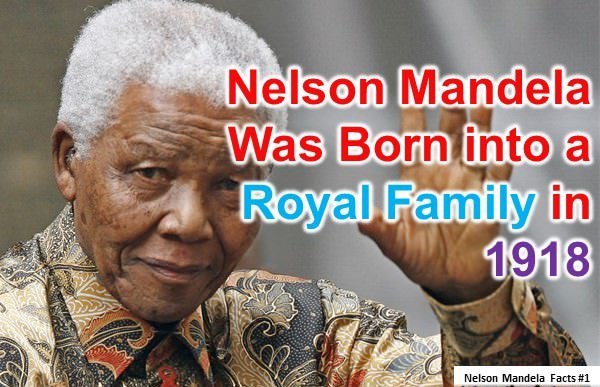 Nelson Mandela facts teach us a lot about the fight for equality in South Africa. Facts about Nelson Mandela fascinate people of all ages, and there is plenty for adults and kids alike to learn.

Nelson Mandela fun facts are inspiring. They tell us about Mandela, the struggle of South Africans, and the people’s eventual success in ending apartheid. Nelson Mandela facts inspire people of all ages and are a great way to teach kids about the importance of equality for all people, regardless of race or background.

1. Nelson Mandela Was Born into a Royal Family in 1918 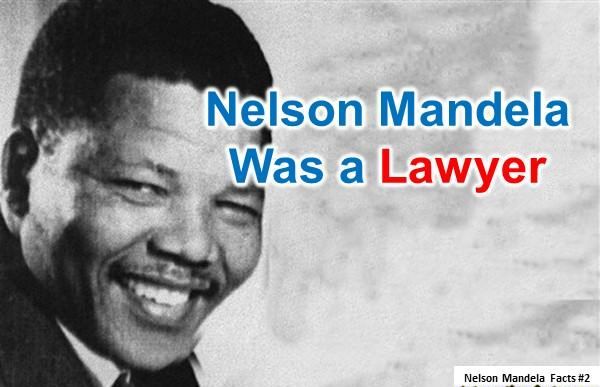 Another of the surprising Nelson Mandela facts is that he was a lawyer. When we think of someone who is a leader for equal rights, we don’t often think of a lawyer. Because Mandela was from a privileged family, he had the advantage of access to education.

While attending school at the University of Witwatersrand in Johannesburg, South Africa, Mandela became a political activist. He joined the African National Congress, or ANC, and began to gain recognition working against colonial oppression.

Nelson Mandela was not afraid to break the law to gain equal treatment for Black people in South Africa. Like Martin Luther King, Jr., Mandela was often arrested for working to bring equal rights to people.

3. Nelson Mandela Was Ordered Not to Speak to Anyone in Public in 1952 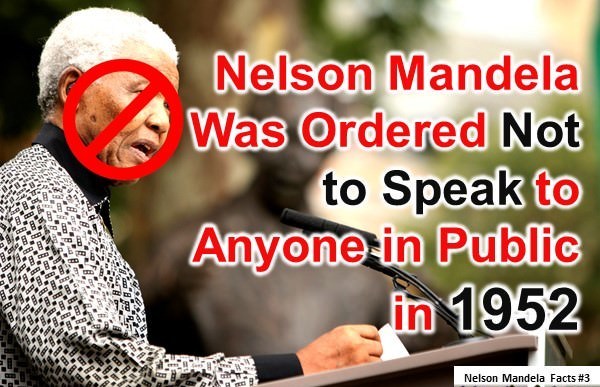 Mandela continued with his political activities and rose through the ranks of the ANC. In 1948, the South African National Party was formed. The party was openly racist and, after taking office, the government began putting the system of apartheid in effect.

Another of the surprising Nelson Mandela facts is that he became a more militant activist in the late 1940s and early 1950s. When Mandela first started his political activities, he sought a non-violent approach to change the unjust laws in South Africa. Mandela’s changing perspective reflected the changing attitude of Black people in South Africa who were opposed to unjust laws.

The African National Congress, which began as an activist group, also became more militant. The ANC began advocating for direct defiance to the system of apartheid. Mandela was arrested and imprisoned many times throughout the period from 1948 to 1952.

By 1952, Mandela was ordered to not speak to more than one person at a time in public and was prevented from attending meetings of groups of people. As a result, he had to step down from his position of leadership in the ANC. 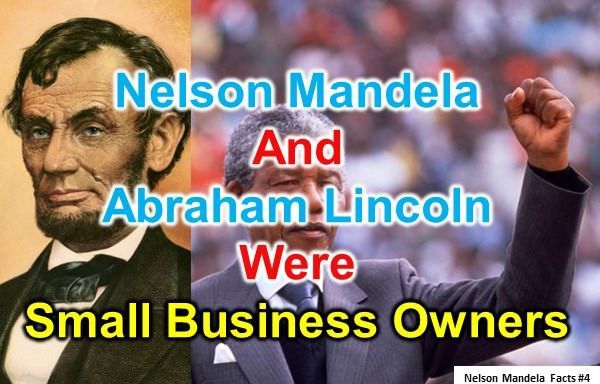 Like Abraham Lincoln, one of the more surprising Nelson Mandela facts is that he was also a small business owner, with his own law firm. In 1953, Mandela opened the only African-run law firm in South Africa with Oliver Tambo.

This is one of the Nelson Mandela facts that teaches us about apartheid. In 1953, the South African National Party was beginning a series of relocations of Black people. They forced people to move from their homes, give up their land, and move into segregated districts that were classified by race. 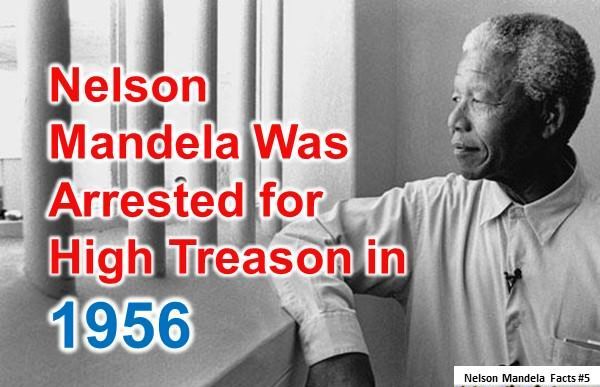 The Congress of the People called for a non-segregated democratic state in South Africa. In December of 1956, Mandela was arrested for high treason against the South African government.

Mandela and other leaders working for equal rights in South Africa narrowly missed being convicted after having the judges from the trial removed for their affiliation to the governing South African National Party.

As part of the apartheid system, Black people were required to carry passes that identified them to authorities. In 1960, Mandela, with the ANC, and other groups including the Pan-African Congress, or PAC, protested the passes by publicly burning them.

During these protests, police shot and killed 69 protesters and declared martial law. Nelson Mandela also burned his pass to show that he was part of the protest. It’s one of the Nelson Mandela facts that shows he was a great leader and willing to put himself at risk for the cause he believed in.

Under martial law, Mandela and others were imprisoned without cause. After being released, Mandela disguised himself as a chauffeur and toured the country, organizing groups of resistance as part of his plan for the ANC.

Mandela formed a group called Umkhonto we Sizwe, or MK, that was intended as the military wing of the African National Congress. The group, whose name means Spear of the Nation planned acts of sabotage.

6. Nelson Mandela Was a Member of the South African Communist Party 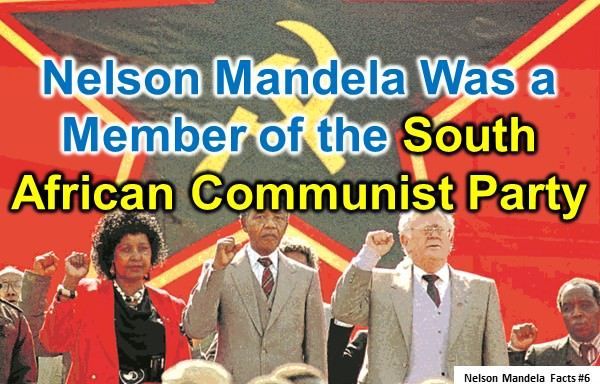 Many of the members of MK were communists. Mandela denied being a communist at the time. In 2011, historians established more Nelson Mandela facts that showed he was a member of the communist party in South Africa.

The MK and the South Africa Communist Party, or SACP, planned acts of sabotage against the government. Nelson Mandela gave strict instructions to try not to harm anyone. The plan was to disrupt everyday life by bombing power plants, telephone lines, and other infrastructure.

Despite Mandela’s instructions, it’s one of the surprising Nelson Mandela facts that he was planning acts of sabotage and gathering money for weapons when he was arrested again and imprisoned for a much longer time than before.

7. He Was Arrested and Imprisoned for Over 25 Years 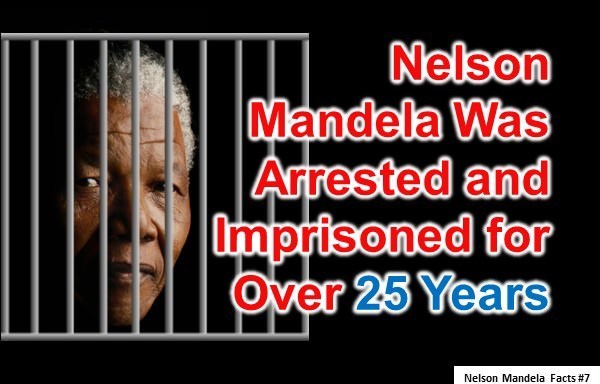 Perhaps the best known of Nelson Mandela facts is that he was in prison for a very long time. He was arrested for the final time in 1963, and this arrest resulted in him being imprisoned for over 25 years.

Shortly after his arrest, police seized some documents from an MK location that established some Nelson Mandela facts, including his role in the plans to sabotage the government. Mandela delivered a three-hour speech as part of his defense. In his speech, he said that history would prove him right. Despite an incredibly eloquent speech in his defense, Mandela was sentenced to life in prison for attempting to overthrow the government. 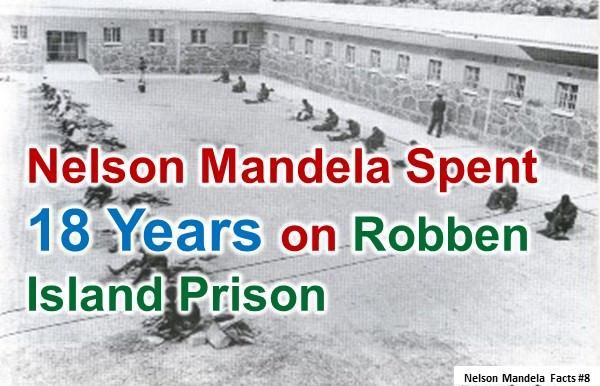 Nelson Mandela spent 18 years on Robben Island in a prison doing hard labor, including breaking rocks and working in a lime quarry. His cell had very little comfort, and Mandela slept on a straw mat on a concrete floor.

Over the next 10 years on Robben Island, from 1965 to 1975, Mandela’s conditions gradually improved, and he was given more outside contact. However, he was still living in harsh circumstances. Mandela was banned from studying after pages from his autobiography were discovered in his cell. After this happened, he spent his time gardening. As soon as he was allowed to, he resumed his studies.

Mandela continued to be politically active. He participated in groups and discussions in the prison and communicated in secret with groups outside of the prison. Through his contact with the outside world, including his letters, some world leaders began to call for Mandela’s release. 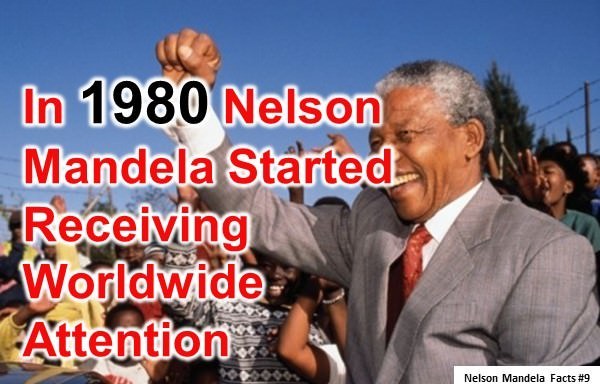 The South African National Party was under too much pressure. The unjust system of apartheid was collapsing, and the government would not be able to keep power for much longer. By 1990, Mandela was over 70 years old and it had been more than 25 years since he had been out of prison. The ANC continued to grow in strength and numbers while Mandela was in prison, despite the organization being outlawed by the government.

10. Nelson Mandela Was Released From Prison on February 2nd, 1990 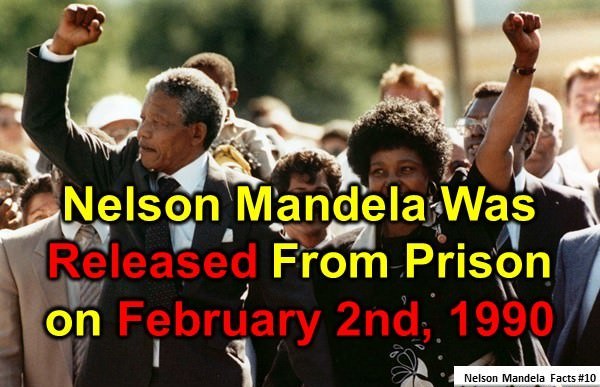 On February 2, 1990, in a surprise move, F.W. de Klerk, who was the President of South Africa, released Mandela and lifted the ban that had been placed on the ANC.

Mandela was steadfast in his views about achieving equality when he was released from prison. It’s another of the amazing Nelson Mandela facts that, after his release, Mandela said that the ANC would use violence, as necessary, to achieve their goals. Nelson Mandela gave a speech after being released from prison saying that he was committed to peace and reconciliation, but that the ANC and Black people reserved the right to defend themselves against apartheid. It was clear apartheid would have to end for South Africa to have peace.

After Mandela took power, more Nelson Mandela facts were established when he published his autobiography in 1994. South Africa was more peaceful, and apartheid had ended. However, the task of rebuilding the country after apartheid has proven difficult and continues to this day.

The system of unjust and unfair laws was abolished from South Africa and Mandela and the ANC were successful in their fight for equal rights. Nelson Mandela was a fearless leader who underwent the hardship of prison to see more equal rights for everyone. His story is inspiring for both adults and for kids. Learning Nelson Mandela facts teaches us that everyone has the power to make a difference.