Skip to Content
Tattooing is a tradition that has been around almost as long as humans. It has varied across cultures and time as a source of pride or as a source of shame. Attitudes have changed over time and today tattoos are extremely popular in many cultures and countries.
Those who have tattoos often see them as the ultimate means of self-expression or artistic freedom or in some cases they are the result of drunken impulsiveness.
Here are 37 interesting facts about tattoos you might not know. 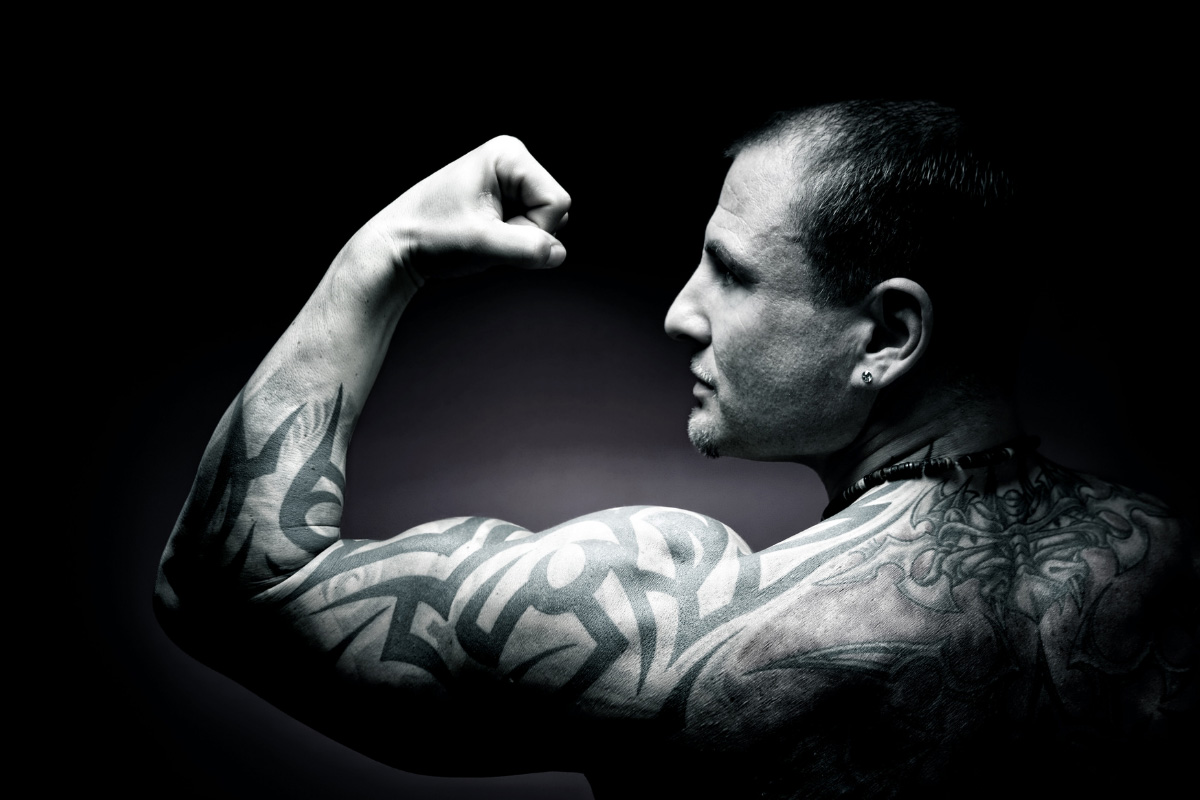 2. It only takes 3 days for inner lip tattoos to heal due to the rapid regeneration of the cells. Because of this, they will also fade and disappear in 1-5 years.

3. 23% of people regret their tattoos, with the biggest regret being a tattooed name.

4. When starting an apprenticeship, aspiring tattoo artist usually practice on fruit. Grapefruit, oranges, and lemons are the closest texture to human skin.

5. Unsanitary tattooing practices can transmit diseases such as syphilis, hepatitis B and HIV; however, there has yet to be an actual case of HIV being transmitted via a tattoo application. 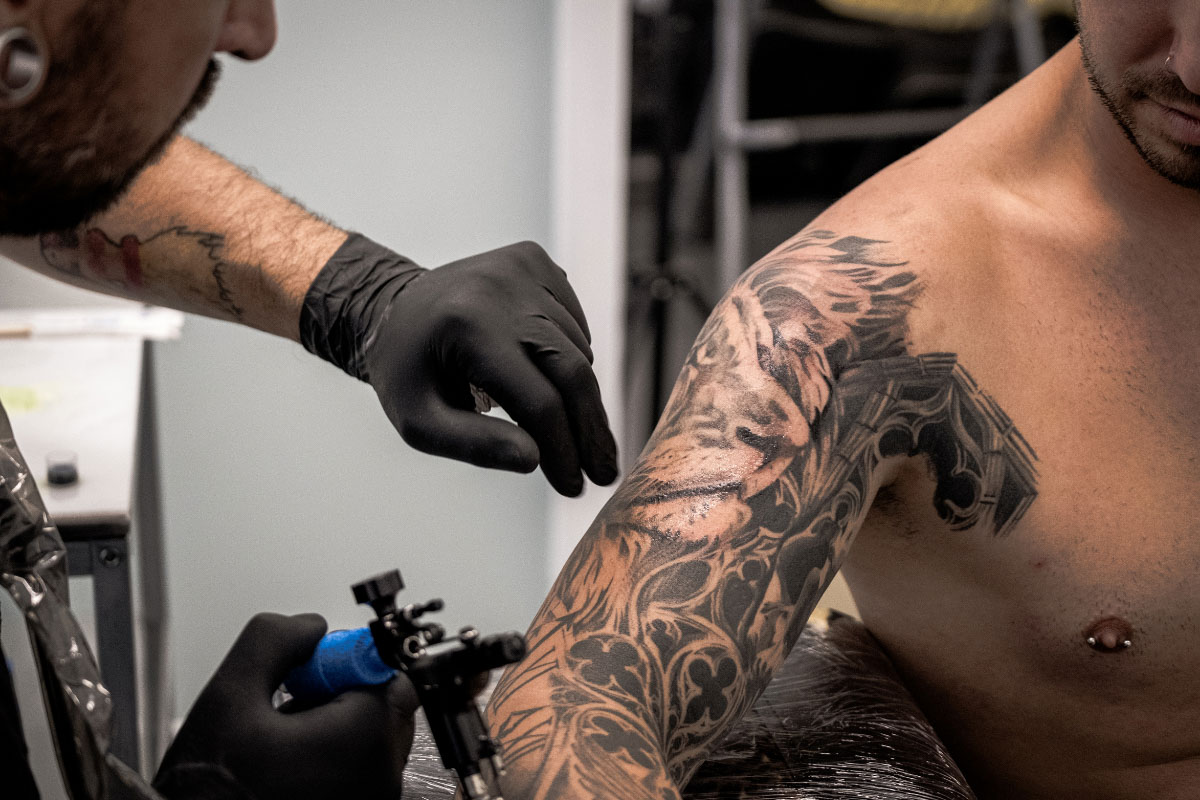 6. Tattoo numbing cream helps with pain, however it may disturb the inking process on the skin and affect the visual result of the design because it can make the skin swell and deform.

7. Government jobs have the most tolerant tattoo and piercing policies, but only 8% of government employees have ink or piercings.

8. States with the highest percentage of tattoo discrimination are South Carolina, Oklahoma and Florida. States with the most tattoo friendly public opinion are Montana, Colorado and California.

10. The part of the body tattooed the most among women, is the ankle area. Among men, the most common spot is the arm.

12. The most expensive tattoo in the world costs $924,000. It is done with half a carat diamonds encrusted into the skin instead of ink. No one has ever had it done.

14. New Zealanders are the most tattooed people in the world. This is mostly due to the island’s Māori who still get traditional Polynesian tattoos. In their culture tattoos are sacred and perceived as a rite of passage.

15. In Soviet Russia, some prisoners would get tattoos of Lenin and Stalin. This was not a form of support, but in case they were sentenced to death, guards would not shoot them because it was illegal to shoot at images of their national leaders. 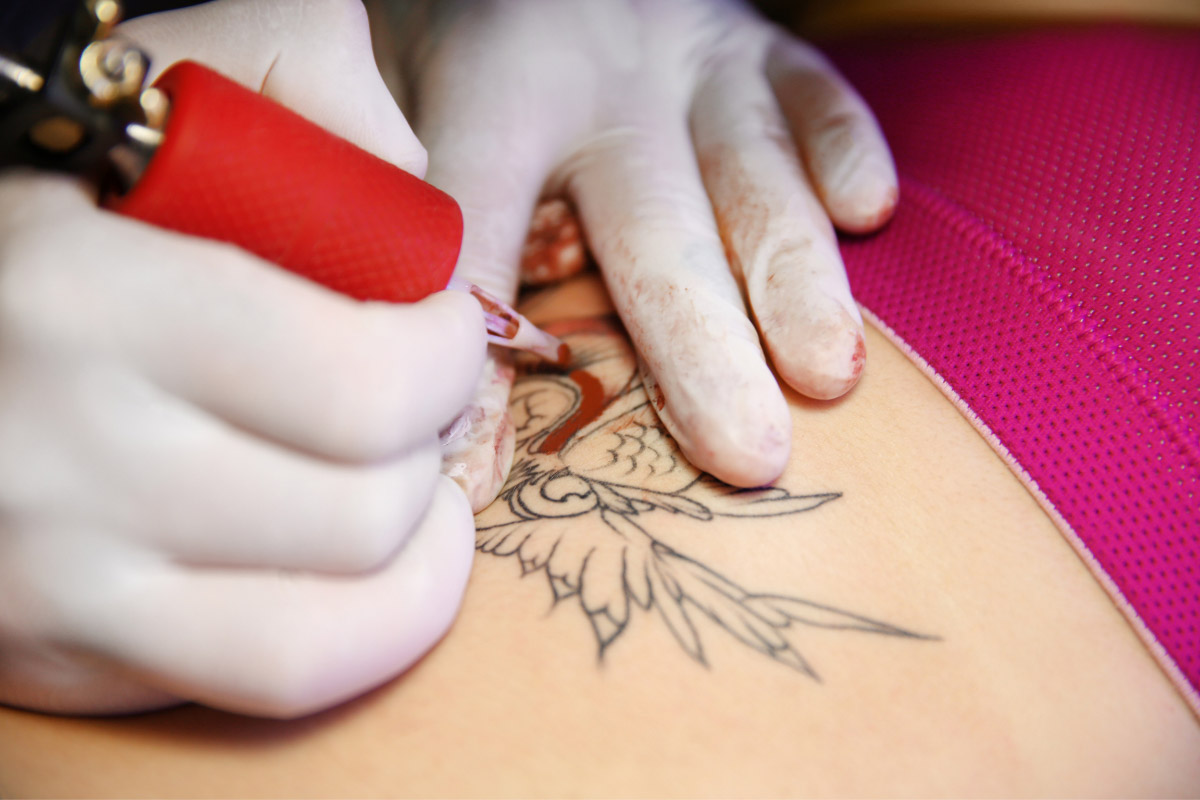 16. In some cultures, urine was used as part of the ink mix for tattoos. This was because it was believed to have antiseptic qualities. Today, using urine is less common and instead antiseptic liquids like vodka are used to help with sterilisation.

17. When describing what it feels like to get a tattoo it has been compared to being scratched by a cat (for quite a while) as well as appropriately having a hot needle scratched across your skin.

18. There are four components to a modern tattoo. The first is the needle. The second is a tube that holds the ink.

The third is an electric motor which runs the needle and allows it to pierce the skin between 50 and 3,000 times a minute. The fourth component is a foot pedal which controls the motor.

19. The earliest evidence of tattoos is from 5,300 years ago. A mummy was found at the Italy-Austria border in 1991 and carbon dated back to that time.

He had a black cross tattooed on the inside of his left knee, six lines on his lower back and parallel lines on his ankles, legs and wrists. When his body was x-rayed they discovered joint disease under each tattoo leading them to hypothesise that the tattoos had been applied as a pain relief method.

20. The word “tattoo” comes from a Polynesian word ta which means to strike. It is believed that this describes the sound of the tatooing needle working on the skin.

The first recorded reference of the word “tattoo” is in the papers of Joseph Banks, a naturalist who was aboard Captain Cook’s ship. The word tattoo is one of the most misspelled words in the English language.

21. The most tattooed man in the world is Gregory Paul McLaren who is also known as Lucky Diamond Rich. He is 100% tattooed including the inside of his foreskin, mouth and ears. Apparently he now gets tattoos on top of the lighter tattoos on his body.

22. Tattoos are in the second layer of skin called the dermis. The cells in this layer of the skin are much more stable than those in the epidermis. This is why tattoos don’t tend to fade much and can last a person’s entire life.

23. Today there are UV tattoos. These are tattoos that were created using an ink that is only visible under an ultravoilet light.

24. One of the most famous tattoos designs was the naked hula girl. When the tattoo was properly positioned on a bicep the owner could make the tattoo’s hips swing and breasts jiggle by moving their arm.

25. The most effective way to get rid of a tattoo is laser surgery. The laser penetrates the skin and breaks up the pigments of the tattoo so that they can be carried away naturally by the body.

Funnily enough black is the easiest colour to remove and green and yellow the most difficult. This treatment can cost thousands of dollars and has been compared to having dots of hot grease applied to the skin. 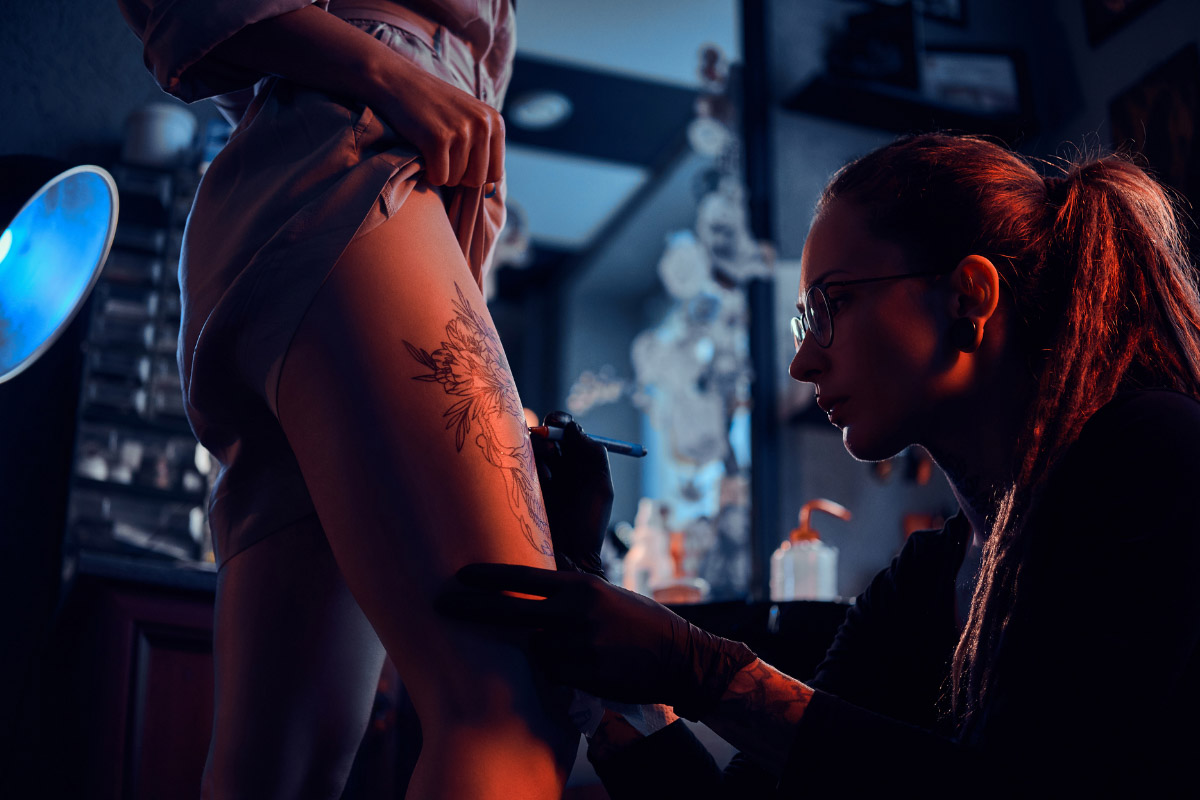 27. The most popular tattoo subjects in many cultures are animals. Animals can be associated with magic or it may be that someone wants to identify with the perceived spirit of a particular animal.

28. Tattooing was used at only two of the concentration camps in World War 2. Tattooing began at Auschwitz in 1941 and at Birkenau in 1942. Only those considered fit to work were tattooed and the tattoo was placed on their chest or arms.

30. The most famous criminal tattoos are those of the Yakuza, the Japanese Mafia. Their tattoos feature traditional designs executed in an intricate manner in a full body suit that can be hidden when wearing clothes.

To this day, people with tattoos are not allowed into Japanese onsens or hot springs/baths due to the link of tattoos and the mafia.

31. Whilst tattooing is prohibited in prisons, prisoners make tattoo machines from a wide range of items including electric shavers and guitar strings. Teardrops at the corners of eyes represent time spent in prison, murders committed or deaths of fellow gang members.

32. Theoretically HIV could be spread through tattooing. However, there have been no reported cases of the disease being spread in this way. However, Heptatitis B and C and syphillis can be transmitted via tattoo application.

33. It is considered unethical to copy someone else’s custom designed tattoo. The exception to this is if children or grand children want to reproduce the tattoo of their relative so that it lives on.

34. It is said that the most painful areas of the body for tattooing are any areas that are over bone such as the ankle, collarbone, chest, ribs and even spine.

37. Tattoos were popular with the English and Russian royalties in the 18th, 19th and early 20th centuries. A tattoo was expensive and could only be afforded by the wealthy.

Once they became more affordable they were deemed “trashy” until tattoos re-emerged in the mid 20th century. 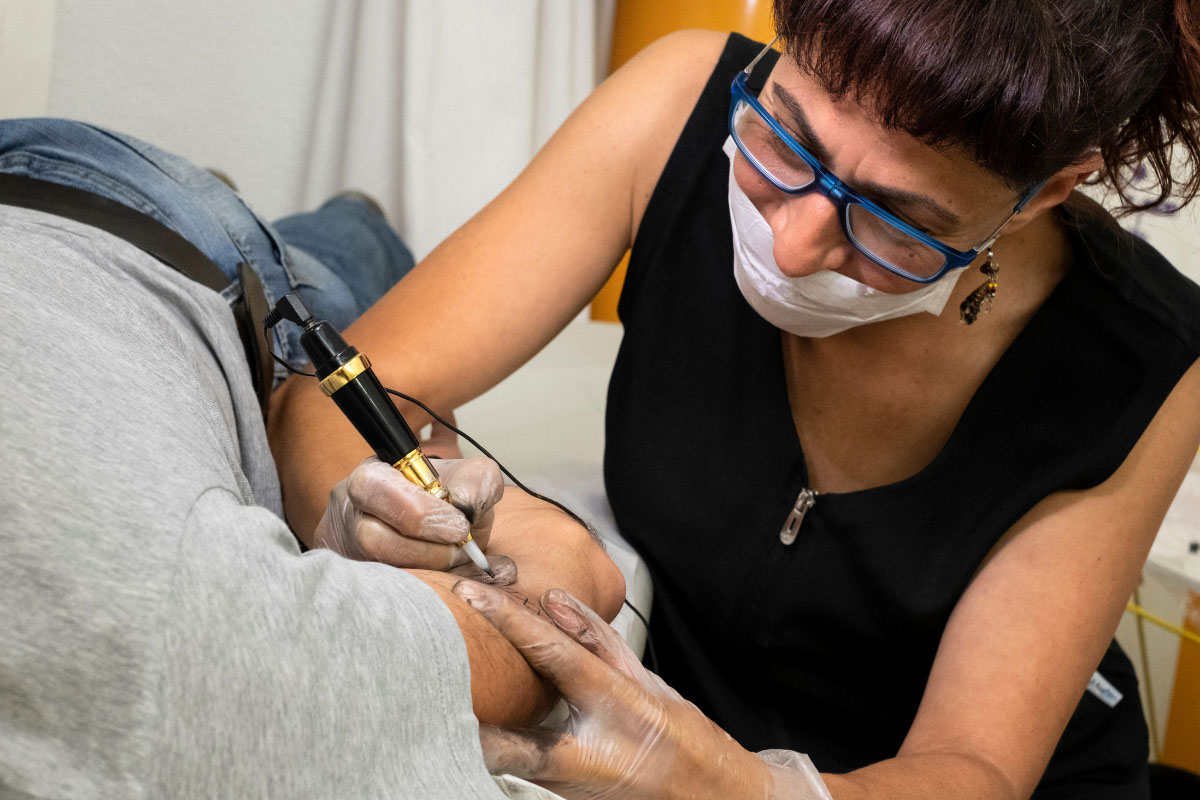