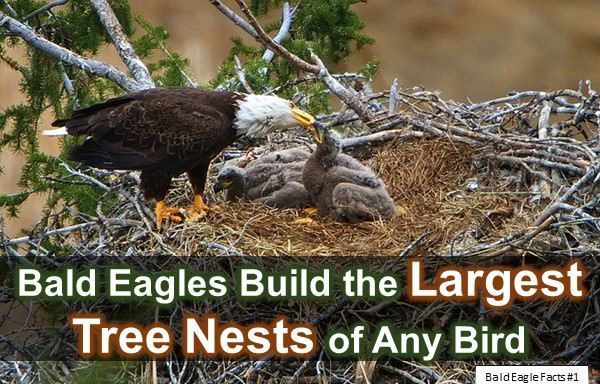 At 100 miles per hour in a dive, bald eagle facts for kids tell us this bird is a fearsome predator that eats mostly fish. Thanks to the banning of DDT and the protection of the bald eagle through numerous acts of Congress, we’ll have more interesting bald eagle fun facts for many years to come.

The bald eagle is both the national bird and national animal of the United States of America. Once endangered, their numbers have since rebounded and bald eagles live all across North America, including Canada, Alaska and Mexico.

The further north you go, the bigger bald eagles are, and they can have wingspans as wide as 8 ft! Bald eagle nests can weigh as much as 1 ton and they certainly like living large! Their nests can be 100 ft. or more in the air.

1. Bald Eagles Build the Largest Tree Nests of Any Bird

Interesting facts about bald eagle tell us about the size of this massive bird. On average, these birds weigh about 10 lbs. By comparison, pigeons weigh anywhere from 10 oz. to 1lb. The bald eagle is both the national bird and the national animal of the United States.

Perhaps the bald eagle should also be the state bird of Texas instead of the mockingbird, because when it comes to living, bald eagles go big! They build the largest nests of any bird that makes a nest in a tree.

Bald eagle facts reveal that these master builders make mansions atop the trees! Bald eagle nests weigh as much as 1 ton and measure up to 13ft. deep and 8 ft. wide. 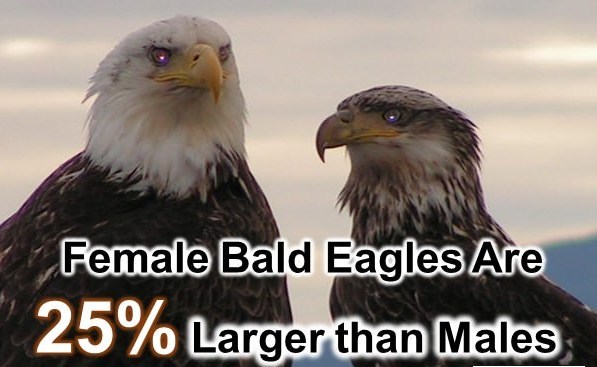 In some species, there can be striking differences in size and appearance. Generally across species in the animal kingdom, the male is larger than the female. However, spider facts and bald eagle facts show that there are exceptions.

In many types of spider, the female is significantly larger than the male. The difference is so striking in the orb weaver spider that the male spider looks like a fly caught in the female spider’s web!

3. Bald Eagles in Alaska Have an 8 Ft. Wingspan 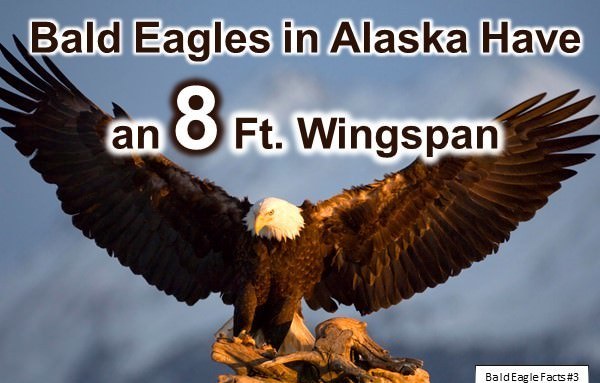 We’ve learned the facts about the massive nests these birds build. Well, bald eagles must need these huge nests so that they have enough elbow room: bald eagles have an average wingspan of between 6 ft. and 7 1/2 ft.

German biologist Carl Bergmann discovered a rule regarding the size of various species and their habitat. Called Bergmann’s rule, it stipulates that members of a species are larger the further they are away from the equator.

Bergmann’s rule holds true according to our bald eagles facts, with the largest bald eagles living in northern climates. Bald eagles with wingspans as large as 8 ft. across have been found in Alaska!

Bald eagle facts show that bald eagles are found throughout North America and Mexico. There are two separate subspecies. The first smaller southern subspecies was discovered by Westerners in 1766, and the second larger subspecies which lives in the north was discovered in 1827.

Cultural facts about bald eagle reveal that in native cultures, the large size of the bald eagle reflects its importance for many tribes. Bald eagle feathers are often used as an important part of rituals for native tribes in North America. 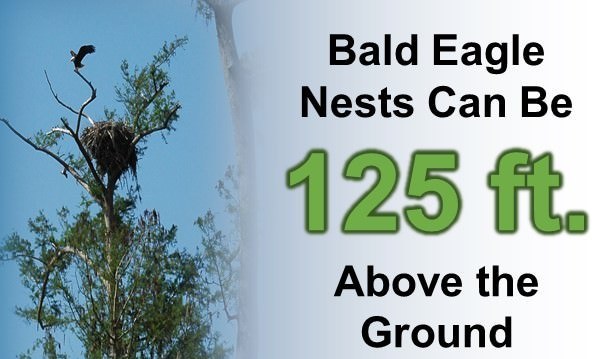 Bald eagle fun facts show that bald eagles are particular about their nest building. Depending on the type of environment, they will build their nest closer or further away from the ground. Bald eagles have two main considerations when deciding on their nest location: they want an easy hunting post from which to launch when leaving the nest for food, and they want their chicks and fledglings to be protected from predators, including other birds of prey.

5. Fish Make up More than 50% of the Diet of Every Bald Eagle 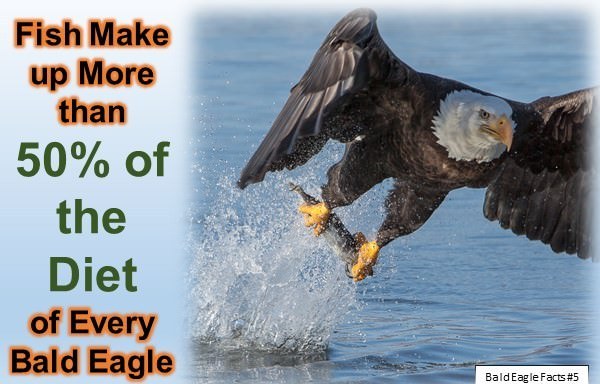 Bald eagles are birds of prey, which means they are carnivores, and only eat meat. Best facts have shown that they like to live near large bodies of water. A large part of the bald eagle’s diet is fish.

In some areas, fish can make up to 90% of a bald eagle’s diet. This is the case for certain bald eagles living on the Columbia River Estuary in Oregon. One of the bald eagles must have set up a sushi restaurant there!

6. 68% of Bald Eagle Deaths Are Caused by Humans 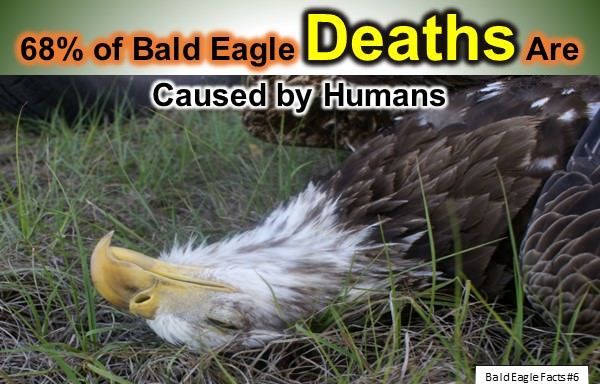 When we look at the average lifespan of bald eagles, Fun facts show that they live on average to be 20 years old in the wild. Some individual bald eagles in the wild have lived for as long as 26 years.

Putting all of these numbers together and looking at the root causes of these deaths, interesting facts about bald eagle reveal the surprising truth that 68% of bald eagle deaths are caused – directly or indirectly – by humans. 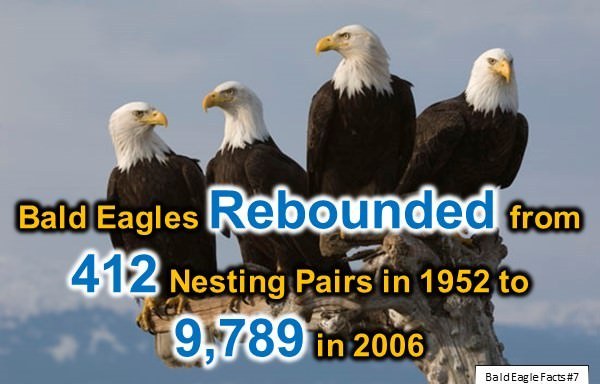 Using bald eagle facts, scientists estimate that there were up to half a million bald eagles in the early 1700s. The story of the bald eagle in the 1900s tells us about human interaction with nature, both bad and good.

When chemical pesticides were introduced, they had a devastating impact on the bald eagle’s breeding. One pesticide in particular, DDT, did not affect the general health of adult bald eagles, but had a negative impact on the bird’s ability to produce calcium. Bald eagle facts show the result of DDT was a thinning of the shells of bald eagle eggs, and some bald eagles in extremely toxic environments became sterile.

As a result of DDT, and the large numbers of bald eagles that were shot by hunters, the number of nesting pairs was reduced to 412 in the lower 48 states by 1952. The bald eagle holds an important place in American culture as the official bird and official animal of the United States. In 1940, the Bald Eagle Protection Act was passed to protect bald eagles and golden eagles.

A forerunner to the Endangered Species Act of 1973, this act provided protection to bald eagles from commercial hunting and trapping. In 1972, the use of DDT was banned in the United States. Since these measures were put into place, the bald eagle has had a remarkable rebound from the brink of extinction and is now labeled as Least Concern on the Endangered Species list.

Bald eagle facts today show there are nearly 10,000 nesting pairs according to the most recent count! 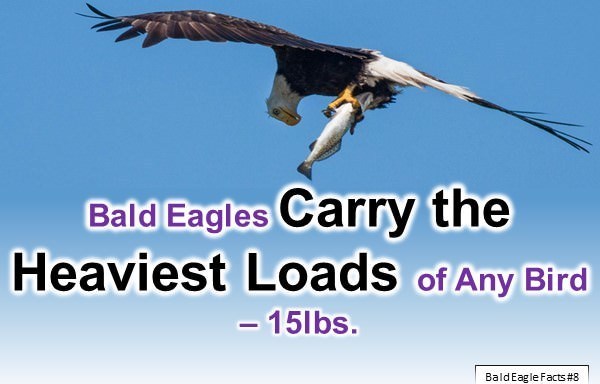 Bald eagles have incredible strength due to their size. They also have some of the most impressive talons of any bird of prey. These massive hook-hands also have special features which help bald eagles capture fish.

As well as fish, small mammals – including mice, rabbits, and even larger animals – also occupy a part of the diet of bald eagles. The largest recorded load of any flying bird was a 15lb. mule deer carried by a bald eagle! Considering the average bald eagle weighs 10 lbs. according to bald eagle facts, the mule deer was likely more than the weight of the bird carrying it! Surely the massive 6 to 7 ½ ft. wingspan of the bald eagle goes some way toward explaining how it can pull off these amazing feats of strength! 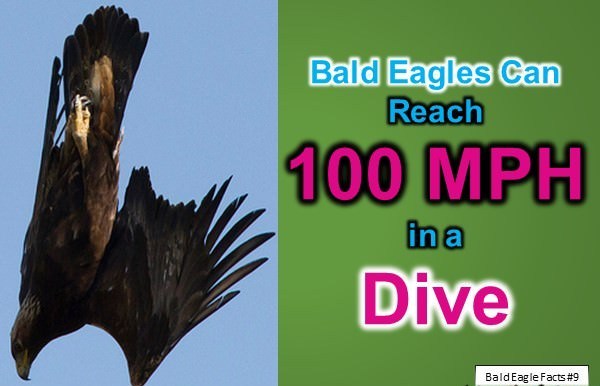 When it comes to moving fast, bald eagle facts show that bald eagles don’t get left behind the pack. These birds are some of the fastest members of the animal kingdom. While they don’t achieve the same 200 miles per hour top speed as peregrine falcons, they are much faster than the average human, flying at 35 to 45 miles per hour.

Like the peregrine falcon, bald eagles are at their fastest when they fly high and then tuck their wings in and dive at incredible speeds towards their prey on the ground. Bald eagle facts show us bald eagles can reach speeds up to 100 miles per hour in a dive! 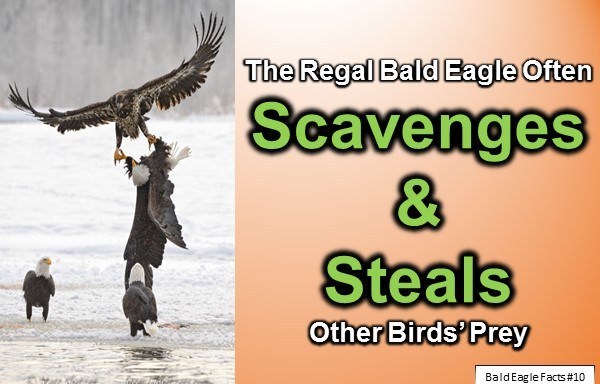 We don’t need bald eagle facts to tell us that the typical image people have in mind of the bald eagle is a regal bird. As one of the symbols of the United States, the bald eagle is held in high esteem. Many people know it’s also a very large bird and a fearsome hunter.

However, when we look at the behavior of the bald eagle, we can see why some people, such as Benjamin Franklin, have been more skeptical of whether the bald eagle deserves royal treatment.

Beyond live prey, bald eagles will often eat carrion, dead fish or game. They’re ruthless scavengers who will chase other birds, and even wolves and foxes, away from a kill. They have no problem stealing another animal’s meal!

While there are many qualities to admire about the bald eagle, its dining habits are certainly not one of them!