Saturn facts are ringing in our ears and we love it! Saturn has captivated people of all ages for thousands of years. It is the farthest planet from the Sun that can be seen with the naked eye. Like Jupiter, Saturn played a big role in Roman mythology and the mythology of other Ancient cultures all over the world.

Saturn is best known for its famous rings, but there are many other interesting facts about Saturn that can help get kids and adults alike excited about learning science and astronomy. Planet Saturn is so far away that spacecraft missions have only recently established many of the facts we now know.

1. In Rome Saturn Was Celebrated with Saturnalia The Biggest Party

Like the name of Jupiter, a planet which is closely related to Saturn, the name Saturn comes from Roman mythology. In Roman times, Saturn was known as the god of agriculture, plenty and wealth. During the month of December, Romans celebrated Saturnalia, which was one of the most famous Roman festivals.

It’s one of the little-known facts about Saturn that the planet’s name is related to Saturday, the day of the week. Saturday was also named after the Roman god Saturn. 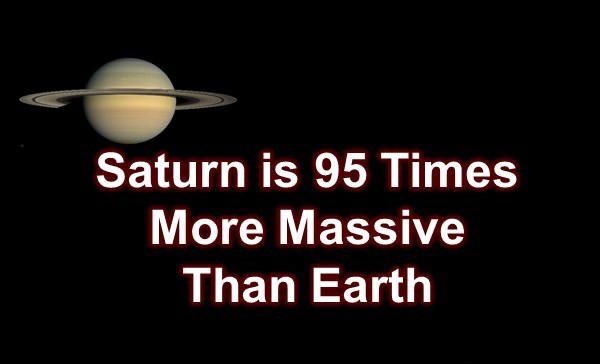 The reason Saturn can be seen from Earth without a telescope is because it is so huge! Saturn is a member of the Gas Giants, a group of planets which includes Jupiter, Neptune and Uranus. The first of the massive Saturn facts is that the circumference of Saturn is over nine times larger than the circumference of the Earth!

The composition of Saturn is not as dense as that of the Earth so, while Saturn has a much greater volume than Earth, it is only 95 times more massive than the Earth. It’s easy to see why the Romans made such a big deal about Saturn!

While Saturn is a member of the gas giants, it is only the outer layer of Saturn that is composed of gas. This is one of the more surprising Saturn fun facts. Saturn is made mostly of hydrogen that is in liquid form. As gravity increases towards the core of the planet, this hydrogen forms metal under the extreme pressure and heat.

Like Jupiter, it is also speculated that Saturn has a rocky core. Recent estimates say the mass of this core could be up to 20 times the mass of the Earth, or perhaps even more! Planetary science has not advanced sufficiently to say for certain what the core of Saturn is like. 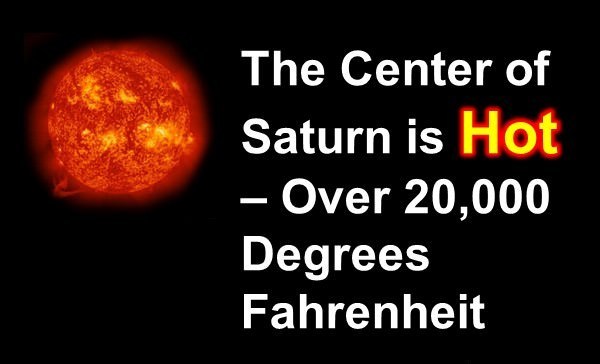 Although Saturn is far out in the solar system, the planet puts out more than twice the amount of energy it receives from the Sun. We tend to think of the outer planets as being cold, so it’s one of the more surprising Saturn facts to learn that Saturn is really cooking!

The interior of Saturn reaches temperatures over 10,000 degrees Celsius, or over 20,000 degrees Fahrenheit! This is another area where science needs to advance further in order to provide us with more interesting facts. Scientists can explain part of the heat of Saturn and the amount of energy it radiates through a chemical process that occurs under extreme gravity. However, this does not explain all of the extra energy that is generated by the planet. Some facts about Saturn remain a mystery for now.

4. Saturn Is Not the Only Planet with Rings 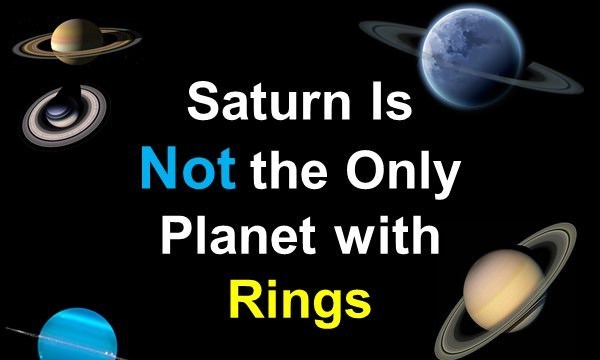 Galileo’s telescope was not powerful enough to provide a detailed view of the rings. This led him to believe that they were two moons instead of a ring system. It was Christiaan Huygens who eventually used a more powerful telescope and was the first to see that the rings were not two moons. Huygens also discovered one of Saturn’s moons, Titan, during this time.

The rings of Saturn are not unique in the solar system! This is one of the surprising facts. Jupiter, Neptune and Uranus all have less visible ring systems that were discovered after Saturn’s rings.

Saturn has the most prominent ring system of all the planets and this is the defining feature of the planet for most people when they think of Saturn. The ring system of Saturn is a subject of great interest for scientists, who have been able to reveal more Saturn facts by studying Saturn’s rings.

The rings of Saturn are over 90% composed of ice made of water. The remaining 10% is made up of trace elements, including carbon. While the core of Saturn is hot, the outer layers and the rings are very cold. We often think of Saturn’s rings as being made of dust, but the ice and other elements can form chunks as large as 30 feet, or 10 meters!

The rings of Saturn are huge, like the planet itself! They reach over 100,000 kilometers, or over 60,000 miles, away from the planet. That’s over twice the size of planet Earth!

Much further out from the main ring system, is the Phoebe ring. This ring is over 12 million kilometers, or over seven million miles from Saturn. The Phoebe ring shares its name with Saturn’s moon, Phoebe.

5. Saturn’s Moon Phoebe Orbits In The Opposite Direction 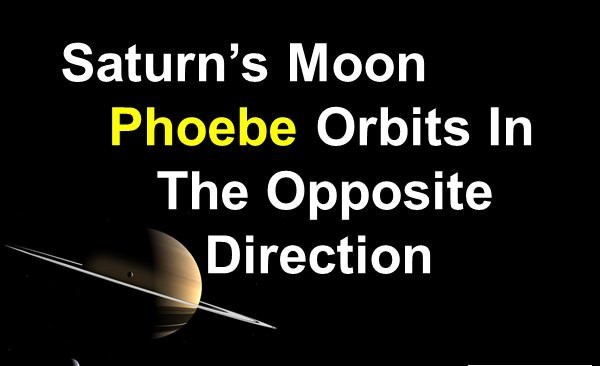 Most planetary moons in the solar system, like Earth’s moon, orbit in the same direction the planet is rotating. Less frequently, a moon will orbit in the opposite direction. This is considered a retrograde orbit.

Saturn’s moon, Phoebe, and the Phoebe ring, both rotate in a retrograde orbit around Saturn. This is another of the mysterious Saturn facts. Scientists have formed hypotheses about the difference in the orbit of most moons and retrograde moons such as Phoebe.

Scientists believe that moons that rotate with a planet were formed at the same time as the planet itself, often from the same material, and in a certain area of the early solar system. They believe that retrograde moons like Phoebe may be objects that were formed separately in another area of the solar system, and were then captured by the gravity of a planet. Moons that are captured may also be captured in a standard orbit. It’s speculated that Saturn’s moon, Titan, is made up of material from further out in the solar system than Saturn.

6. Saturn Has Over 100 Moons and Moonlets 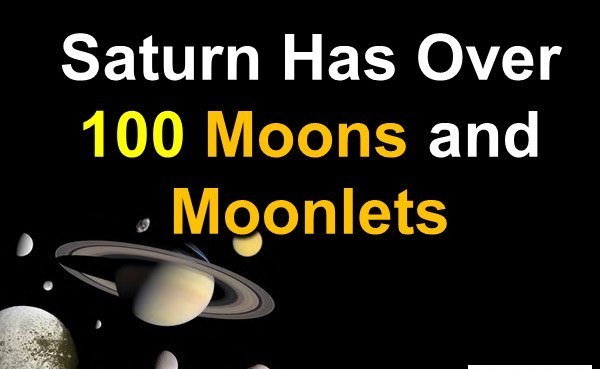 In addition to Phoebe, and its ring system, Saturn has over 100 moons and moonlets. Titan is by far the largest of all of these, and accounts for over 90% of the mass of objects orbiting Saturn.

Scientists love establishing Saturn facts. Over 50 of the large and small objects orbiting Saturn have been named. Some of the most interesting facts about Saturn’s moons point to the possibility of extra terrestrial life. Three of Saturn’s moons — Enceladus, Rhea, and Titan — show features that are normally associated with planets, and some even have features similar to those of Earth!

7. Saturn’s Moon Enceladus May Have Life On It 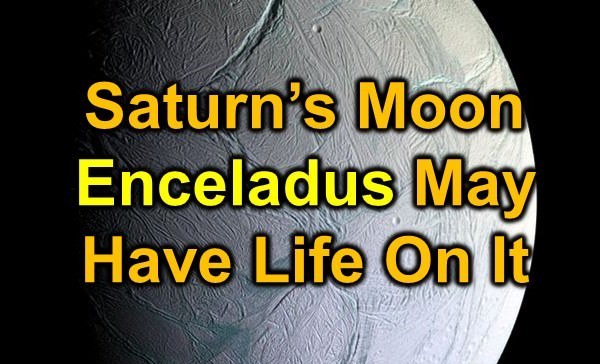 This is one of the most intriguing of all facts about Saturn. Saturn’s moon Titan is the only moon in the solar system that has a thick atmosphere. It was the first moon to be discovered with an atmosphere. Later, it was discovered that Enceladus and Rhea also have atmospheres, though not as substantial as that of Titan.

While an atmosphere promises the possibility of life, no life, as we know it, could live on Titan. The lakes on Titan are filled with liquid methane and the temperature is 180 degrees Celsius below zero, or nearly 300 degrees Fahrenheit below zero. There might be lakes on Titan, but you certainly wouldn’t want to go swimming in them!

Enceladus offers a better prospect for extra terrestrial life. The salt in the atmosphere on this moon has led scientists to believe that it is the result of evaporation from water that is like the water in the Earth’s oceans.

Scientists are not searching for intelligent extra terrestrial life on Saturn’s moons. They are intrigued by the possibility that microbial life, such as bacteria, may live on Saturn. 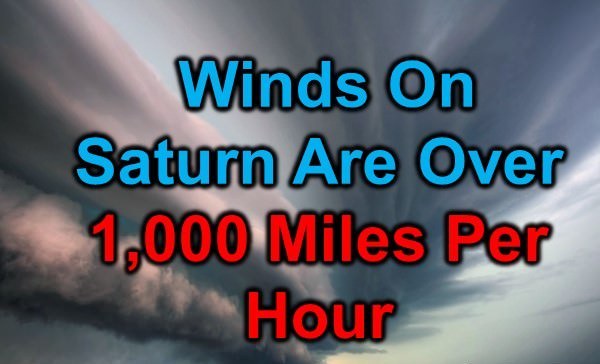 People often think of Jupiter facts or Neptune facts when thinking about extreme weather in the solar system. People think of the Great Red Spot on Jupiter and the fast winds on Neptune. Saturn also has extreme weather, and there are some amazing Saturn facts that can tell us about Saturn’s weather.

Wind speeds on Saturn can reach as high as 1,800 kilometers per hour, or over 1,000 miles per hour! This makes the winds on Saturn faster than the winds on Jupiter, although Neptune still holds the record for the fastest recorded winds in the solar system.

While it doesn’t have a Great Red Spot, Saturn does share some features with its neighbor, Jupiter. Some of the more mysterious facts relate to the Great White Spot. Saturn is farther away from the Sun than Earth and completes one orbit for every 30 times the Earth orbits the Sun, or every 30 years. The large white cloud appears on Saturn once every 30 years, or once every time Saturn orbits the sun.

There are some other strange features of Saturn that lead us to more mysterious Saturn facts. There is a hexagonal shaped cloud on the north pole of Saturn. The hexagonal shape rotates every ten hours or so, and scientists speculate that it is rotating with the core of Saturn.

Another large storm is located on the south pole of Saturn. This storm is unique because it has an eye wall. This feature is typically not seen on storms outside of Earth. For instance, the Great Red Spot on Jupiter does not have an eye wall.

In addition to extreme storms, scientists have recently discovered that Saturn experiences extreme lightning! Add this one to the list of little-known facts about saturn. The lightning on Saturn can be up to 1,000 times more powerful than the lightning we have on Earth. The shocking truth is that Saturn has some of the most spectacular weather in the entire solar system!

9. The Huygens Probe Was Launched At the Surface of Titan in 2004 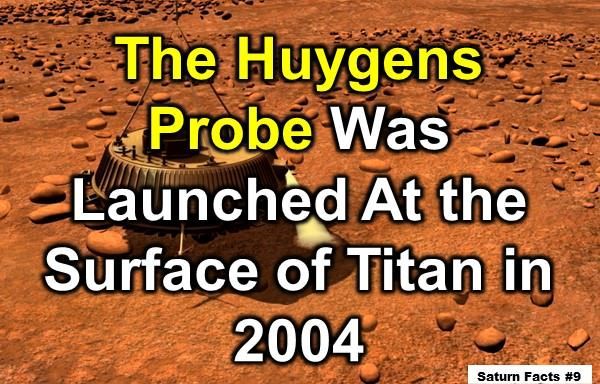 In an effort to gather more interesting Saturn facts, many spacecraft have been launched which have made observations of Saturn. Pioneer 11 was the first to flyby Saturn, in 1979. Next, the Voyager I spacecraft observed the planet. By this point, scientists were gathering more information on Saturn’s moon Titan and were beginning to get excited.

In 1981, Voyager II visited Saturn and took more images and measurements for scientists to study. In 2004, the Cassini-Huygens space probe entered into orbit around Saturn. The Cassini spacecraft had launched the probe, and also captured radar images of Titan and Phoebe.

Cassini completed its visit of Saturn in spectacular fashion, and gathered more Saturn facts about Titan by launching the Huygens probe at the surface of the moon. The Huygens probe provided scientists with more detailed information about the composition of Titan’s atmosphere.

10. Every So Often, Saturn’s Rings Disappear 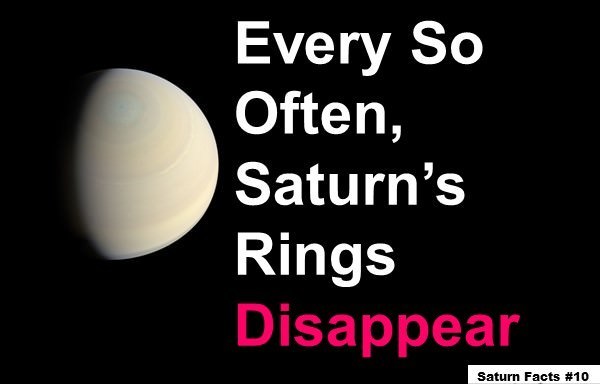 Once every 15 years, Saturn is at an angle from Earth which causes the rings of Saturn to apparently disappear. This is due to the rings being relatively thin. When they are on plane with the Earth, they are difficult to see with most telescopes.

Thankfully, when Saturn’s rings disappear, it’s only an illusion. The rings of Saturn are its most prominent feature and the many spacecraft that we have sent to Saturn have revealed more Saturn facts about the rings of Saturn. They are mostly made of water ice and dust, and some of the pieces can be as large as 30 feet!