Germany Facts can teach us a lot about the history of this part of Central Europe. Germanic tribes occupied the area that the Romans would go on to call Germania. After the fall of the Roman Empire in Rome, the center of power moved to Germany, where it stayed until the 1800s.

The 1900s give us some of the worst facts about facts. The horror of the Holocaust still shocks us today, and Germany suffered heavy losses in both World War 1 and World War 2. Many Germans were killed, and many atrocities were committed by Germany under the power of Hitler and the Nazi Party.

Germany was divided into East and West Germany after World War 2. In the 1990s, Germany was reunified, and more positive Germany fun facts have continued to surface since then. Germany is the 5th largest economy in the world, the most populous country in Europe, and plays a central role in the European Union.

1. Over 80 million People Live in Germany

The European Union grew out of trade unions that were established in the 1950s. The goal of the European Union is to facilitate the free movement of goods and people throughout Europe. By creating a more fluid economy between the different European states, the European Union hopes to provide Europe with a larger role in the global economy. 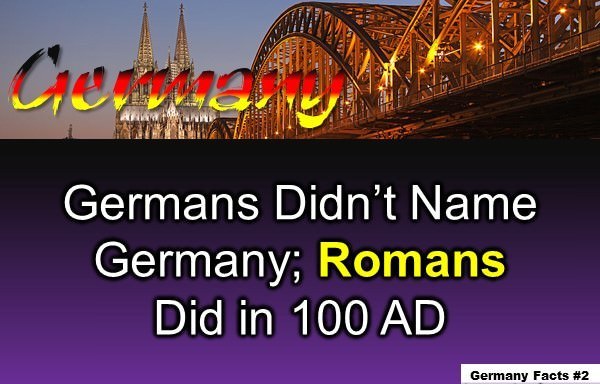 The early history of Germany teaches us many Germany facts, and tells us a lot about the history of Europe as a whole. Fossils discovered in the Neander valley in Germany give us the first evidence of non-modern humans. These Neanderthals were a different type of human than we are, and lived in Europe and Asia approximately 40,000-60,000 years ago. Neanderthals share many traits with modern humans but are considered a different species.

Tribes of people occupied the area now known as Germany for thousands of years. During ancient history, these tribes came into conflict with the Roman Empire. It was the Romans who first described this area as Germania, and the inhabitants of the region became known as Germans. It’s one of the interesting facts about Germany that the Germans did not actually name themselves. The Germanic tribes that lived in this area gained power over time, and eventually took land from the Roman Empire as it declined from 200 – 400 AD. 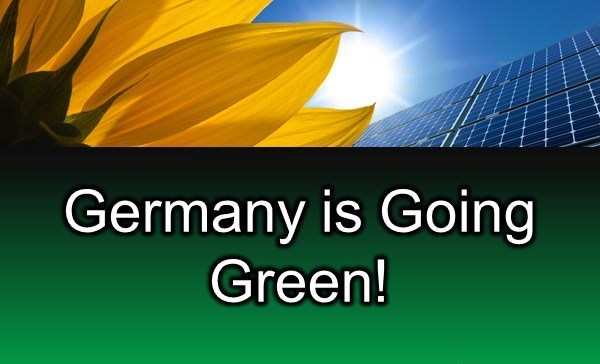 As part of its move towards the future, the current German government has enacted many laws and practices to encourage the use of renewable energy. Germany is proving its new role as a global citizen by leading the way in using environmentally friendly ways of generating energy. Germany is going green!

As a result of Germany’s efforts, their greenhouse gas emissions are falling. The final goal of the German plan for renewable energy is to eliminate reliance on coal and other non-renewable sources of energy. Germany is pursuing this goal through renewable energy, greater energy efficiency, and more sustainable growth. The future looks bright for Germany! 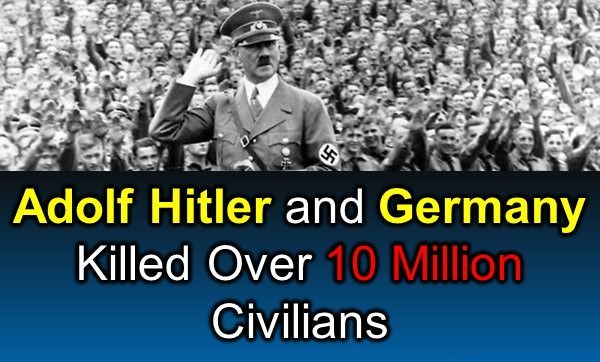 Some of the most awful Germany facts surround Adolf Hitler and the Nazi Party. The Nazi Party came to power in 1933 when Hitler was made Chancellor of Germany. The economic conditions in Germany and the harsh conditions of the Treaty of Versailles, whether real or imagined, led Germans towards totalitarianism.

Hitler was given power over all of Germany. He even had the soldiers in the German army declare their allegiance to him personally instead of to Germany. Germany created a bureaucracy of war and terror. Hitler and the Nazi Party committed what many consider the greatest crime of the 1900s: the Holocaust.

The Nazi’s crimes began as segregation against Jews, other minorities, and political dissidents, and ended in an effort to kill all the Jews in Europe. Over six million Jews, and over 10 million civilians in total, were killed as a result of the actions of Hitler, the Nazi Party, and the people of Germany who ran a bureaucratic killing machine. These are the worst Germany facts of all, and these facts about Germany continue to cast a shadow over the country 70 years on. 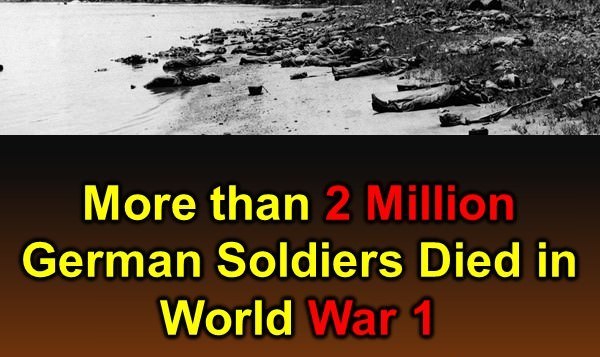 Germany continued to consolidate power and, by 1900, the policies of Otto von Bismarck had expanded German influence and territory across Europe. Bismarck served under Wilhem I. After Wilhem II took power, he took a more aggressive approach to expanding the power of Germany. This is one of the more important Germany facts, as this would lead to conflicts within Europe, and eventually war.

The crown prince of Austria, a country that bordered Germany, was assassinated in 1914. This led to a series of events that resulted in World War 1. It was a bloody conflict, and ushered in the era of modern warfare. World War 1 provides some of the saddest Germany facts. Roughly two million soldiers lost their lives during World War 1.

Germany lost World War 1 to the Allied Powers that included the United States, France and Great Britain. In 1918, the German Revolution occurred. Wilhem II and the remaining German princes gave up power, and Germany became a republic. The German people were ready for a change after suffering heavy losses in a war that was fought for a monarchy. 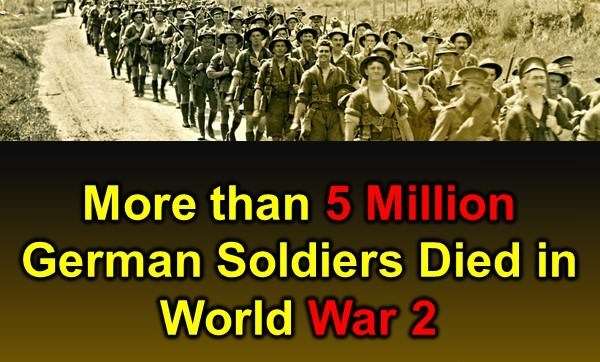 Germany was part of the Axis Powers during World War 2. They invaded countries across Europe. Germany occupied France, Austria, Belgium, and most of continental Europe. Mussolini’s fascist Italy was also part of the Axis powers, and controlled additional parts of Europe, as well as parts of North Africa. It seemed that the Axis Powers of Germany, Italy and Japan were destined to win the war.

The Allied Forces fighting the Axis Powers gathered all their troops for a massive invasion in 1944, called D-Day. This was the beginning of the end for Germany and the Axis Powers, as the tide started to turn in favor of the Allied Powers in World War 2.

Germany and the Axis Powers had a strong start to the war, but they were overcome in the end. After D-Day, Germany was fighting a war on two fronts: they were fighting with the United States and Britain on the Western Front, and fighting with the Union of Soviet Socialist Republics, or USSR, on the Eastern Front. When Germany lost World War 2, it lost to both the Soviets and to the Western Powers.

7. When Germany Was Divided in 1948, an Entire City Was Split in Half 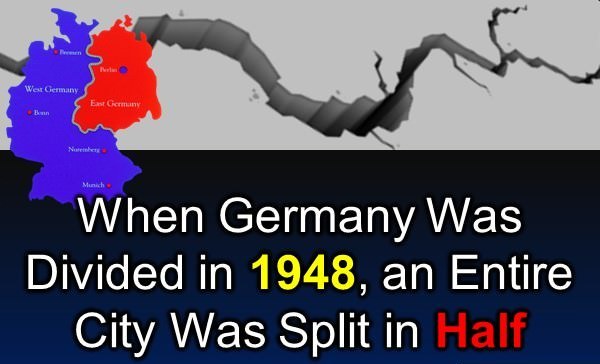 Relations broke down between the Soviets and Western Powers at the end of World War 2, leading to what would be called the Cold War. It happened so fast, that the occupying forces in Germany never left! This is another one of the important Germany facts. The Soviets and the Western Powers continued to occupy Germany and the city of Berlin after World War 2 ended.

Eventually, an agreement was reached that would become one of the interesting facts about Germany that would define life in Germany for the next 50 years. The agreement involved splitting Germany into two parts. One part was capitalist West Germany, which was supported by the Western Powers of the United Kingdom, the United States, France, and other countries. The other part was East Germany, which was supported by the USSR. The USSR also retained additional European territory it had acquired during World War 2, and made those countries states in the USSR.

The main city in Germany, Berlin, was split in half too! This is one of the unusual facts about Germany for kids. It sounds absurd to split a city in half, and it made life absurdly difficult for people living in Berlin, especially for families who had relatives in both halves of the city. The city was divided into East and West Berlin. As the Cold War continued, a wall was built between the two halves of the city to prevent travel, and was known as the Berlin Wall. All across Europe, the dividing line between the USSR and capitalist Europe was referred to as the Iron Curtain.

8. X-Rays, The Printing Press, and Einstein all Came from Germany 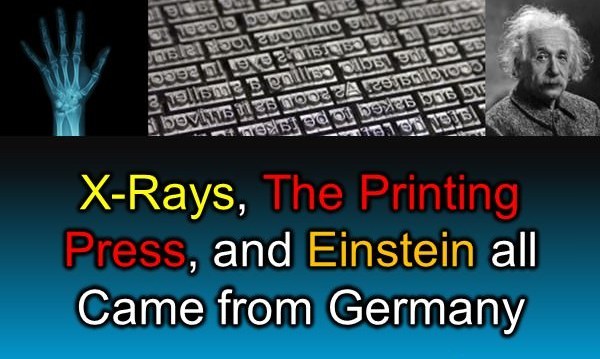 Some of the interesting facts about Germany teach us about the amazing number of innovations and inventions that come from Germany. While not exactly an invention, one of the important historical facts about Germany for kids is that Martin Luther innovated Christianity when he started the Protestant Reformation in Germany in the 1500s. This would eventually lead to the great variety of Christian sects that exist in the world today, and remain separate from the Catholic Church.

An amazing number of technological innovations and inventions came from Germany and provide more interesting Germany facts. Gutenberg built his printing press in Germany, and many point to this as being part of what accelerated the Reformation. More recently, in the 1800s and 1900s, X-Rays were discovered in Germany, and the internal combustion engine was invented there.

During the early 1900s, Albert Einstein, who was born in Germany, lived in Germany when he elaborated his theory of relativity to include gravity. Einstein became a United States Citizen in 1940 after immigrating to the United States in 1933 when Hitler took power in Germany. During World War 2, the German war machine produced many innovations, including the first space rocket, and magnetic tape for recording sound.

9. The Treaty of Versailles Ordered Germany to Pay $440 Billion in Reparations 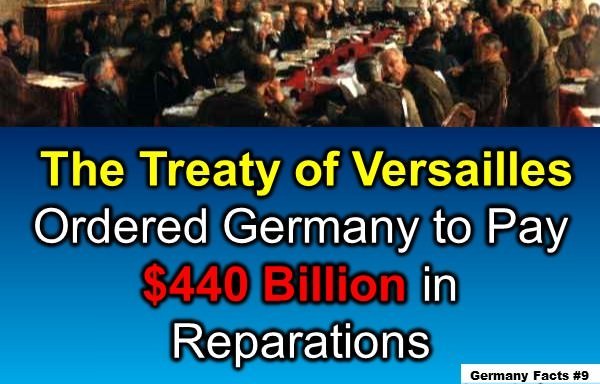 The Treaty of Versailles was signed in 1919 and provides us with more important Germany facts. This treaty was signed by the newly formed League of Nations, and placed a set of strict conditions on Germany. These conditions included disarmament, and reparations that were to be paid to the countries in Europe which Germany had invaded.

Some people say the conditions of the treaty were too harsh, and crippled the German economy. The equivalent value of the reparations demanded of Germany at the time is $440 billion USD today – ouch! Other scholars have said that the conditions of the treaty were not harsh enough to cause Germany to restructure itself in a way that would result in long-term peace. Germany never got the scolding it needed: it should’ve been $1 trillion in reparations! This is one of the interesting facts that has recently been under more debate.

Whether or not the economic troubles of Germany during the 1920s and 1930s can be directly attributed to conditions of the treaty, the Great Depression crushed any growth that was occurring in the Germany economy after World War 1.

You should also read: Fun facts about Eiffel Tower

10. Germany Has the 5th Largest Economy in the World 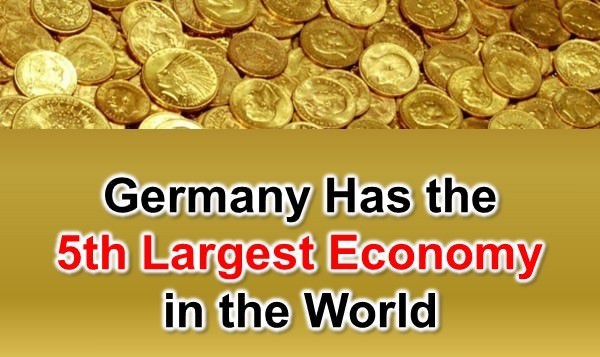 When Germany was rebuilt after World War 2, West Germany slowly grew its economy to become one of the largest in Europe. East Germany was initially boosted by the rapid industrialization of the USSR under Stalin. However, over time, the flaws in the Soviet system led to the decline of the East German and Soviet economies. By the 1980s, East Germans lived significantly poorer lives than their counterparts in West Germany.

During this time, many East Germans risked their lives to flee to West Germany for better living conditions. To do so, they had to be smuggled past intense border fortifications, including the Berlin Wall.

West Germany and East Germany were re-united in Oct. 3, 1990, followed by the fall of the Soviet Union in 1991. The German economy has continued to grow, and is now generally considered the 5th largest economy in the world. As a result of reunification, Germany is now the most populous country in Europe.

The legacy of the Soviet era still has an impact on people’s lives in Germany. The Soviet occupation is one of the Germany facts that changed Germany forever. People in East Germany are still, on average, poorer than those in West Germany. As a federal republic, Germany has been practicing a policy of sending tax revenues from the former West Germany to the former East Germany. It is to help rebuild the economies in those German states. This plan is set to continue until nearly 2020 – 25 years after reunification!