Ecuador has an incredible amount of resources, both economic and environmental. Ecuador facts teach us about Charles Darwin who had his breakthrough theory of Evolution after visiting Ecuador and the Galapagos Islands.

Ecuador has struggled throughout history – first for independence from Spain, then to claim its own lands from its neighbors, including Colombia, Brazil and, most notably, Peru. Despite losing a good deal of land in the process, Ecuador remains a strong economic powerhouse in South America.

Ecuador’s $170 billion economy is based on exports, and Ecuador is the largest exporter of bananas in the world, with exports totaling $2 trillion by most recent counts. A long-standing trading partner with the Unites States, Ecuador’s official currency is actually the US dollar!

Here is a list of 10 interesting facts about Ecuador.

1. Darwin’s Breakthrough Happened in Ecuador – At the Galapagos Islands

Located in South America, the official name of Ecuador is the Republic of Ecuador. Geographic Ecuador facts tell us the country is located on the northern part of the west coast of South America, and is bordered by the Pacific Ocean, Colombia and Peru.

The Galapagos Islands may well be the most famous part of Ecuador. They are a group of islands in the Pacific Ocean, off the western coast of Ecuador.

Taking keen observations of the plants and animals on the Galapagos Islands led Charles Darwin to develop his theory of Evolution. Ecuador facts teach us that from 1831-1836 Darwin sailed aboard the HMS Beagle with Captain Robert Fitzroy. He took extensive notes on the plants and animals he found in Ecuador, on the South American continent and on the Galapagos Islands.

Ecuador facts show us that 94% of the people in Ecuador, known as Ecuadorians, speak Spanish. Looking at historical Ecuador facts, we see that Ecuador was once a colony of the Spanish Empire. From 1563, the main city in Ecuador, Quito, was the seat of power for the Spanish administrative district in the area.

Ecuador facts show that the land of Ecuador was once part of the Spanish colony the Viceroyalty of Peru, and later the Viceroyalty of New Granada. As early as 1809, people in Quito declared independence from Spain. By 1832, the country had established itself as a democratic republic.

However, the legacy of Spanish rule remains, and 94% of the population today speak Spanish. There were many native tribes when Spanish conquistadors arrived. Some of these native tribes survived in greater or lesser numbers, and to this day, there are 13 native dialects recognized. These 13 native dialects make up the language of the remaining 6% of people who live in Ecuador.

The confusion over Ecuador’s place in the Spanish Empire and on the continent of South America would continue as the country gained independence and battled with Peru over the rights to its land. 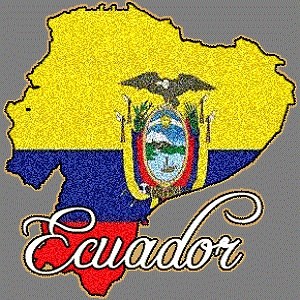 Ecuador facts reveal that Ecuador and Peru were engaged in a long-running fight over the border the two countries share. This dispute was so long that it spanned generations!

Looking at historical Ecuador facts, we learn that the battle over the border between Ecuador and Peru was based on treaties involving Spain, Portugal and the emergent nations of Brazil, Colombia, Peru and Ecuador. Let’s face it, these are some messy Ecuador facts, with overlapping and contradictory agreements made since the time of Spanish colonization.

Matters became more complicated as the 1800s progressed. Ecuador facts show that Peru signed a secret peace treaty with Brazil in 1851 and began occupying disputed territories in the Amazon Basin. Peru even went so far as to name the region and set up a capital of government for overseeing the territory.

This continued throughout the 1800s and into the 1900s, with Ecuador signing a treaty with Colombia to end the dispute in 1916. This was short-lived, as Colombia signed a secret agreement with Peru in 1922 that gave land to Peru which Ecuador had given to Colombia in 1916. You can see now why facts about Ecuador’s borders are some of the most confusing Ecuador facts!

Ecuador facts show that Peru and Ecuador were in negotiation from 1924 to 1941, at which point troops were mobilized and the war started to heat up between the two South American countries. World War 2 was raging at the time, and international pressure brought Ecuador and Peru to agreement for a short while. It was more important for South America to be united against Germany, Italy and Japan than to be at engaged in internal wars.

When Ecuador began exporting oil in the 1970s, tensions escalated again over a small river that was not clearly defined in the last agreement. Finally, in 1998, a peace agreement was signed that has held until today. The last set of international troops, placed in Ecuador and Peru to ease tensions, left in 1999.

4. Ecuador Exports $2 Trillion Worth of Bananas Every Year

The economy of Ecuador depends on exports. One of the surprising Ecuador facts is that Ecuador is the world’s largest exporter of bananas.

Looking at recent Ecuador facts relating to the exports of bananas, we see that over 280 million boxes of bananas are exported each year.

The total value of Ecuador’s banana exports exceeds $2 trillion each year. All those yellow bananas turn into a lot of green dollars for Ecuador’s economy!

Looking further at economic Ecuador facts, we see that the economy continues to rely on the vast resources of the land which drew Spanish conquistadors to the area more than 400 years ago. The vast resources in the relatively small area of land that is Ecuador also explain why Ecuador’s larger neighbors Peru and Brazil took land from Ecuador by force and through treaties.

Oil, bananas, shrimps, gold and agricultural products form the main basis of the export economy of Ecuador. In more recent years, exports of other goods, such as flowers, have grown to $291 million, and exports of canned fish have reached $333 million.

6. The Official Currency of The $170 Billion Ecuador Economy is the US Dollar

Perhaps the most surprising of the Ecuador facts about the country’s economy is that the official currency of Ecuador is the US Dollar!

Ecuador facts show the country made the transition to the US Dollar in 2001, and it seems it was the right decision! Argentina facts reveal the trouble that their economy has had in recent years. Ecuador insulated itself from the economic heat wave which scorched the economies of other South American countries.

Ecuador has the world’s 63rd largest Gross Domestic Product, or GDP, which is estimated to total $170 Billion in 2014.

7. One of the Best Comedy Directors and Voice Actors Ever is From Ecuador

Looking at Ecuador facts, we learn that one of the funniest cartoon creators, comedy directors and voice actors is from Ecuador. Mike Judge is the creative genius behind Beavis and Butt-head, King of the Hill, Office Space and other television series and films.

Whether or not you appreciate Judge’s particular style of humor, there’s no disputing the fact that his work has had an impact on comedy and our culture. On a list of the 65 best comedy directors in history, Judge was listed as number 18.

Ecuador facts show that this Ecuadorian not only directed and produced many of his own works, but he also acted in them as a voice actor. In a list of the 38 best voice actors of all time, Mike Judge was chosen as number 19.

While Ecuador facts don’t reveal too many international celebrities, Mike Judge shows that Ecuador also exports talent along with bananas, oil and shrimps!

8. There Are More Mobile Phones Than People in Ecuador

Ecuador facts have shown that Ecuador tied its economy to the US dollar to stabilize the economy. This helps insulate Ecuador’s economy from inflation, but also prevents the government of Ecuador from printing money, other than issuing coins which are backed by actual dollar bills.

In Ecuador, 40% of adults don’t have access to a bank account, yet there are more mobile phones than people in the country! The government sees this as an opportunity to test digital currency.

Although Ecuador facts show that Ecuador cannot print money, a law was recently passed which allows the government to issue digital currency. The first test case is planned for the snack-carts at Ecuador’s Central Bank, or BCE. Despite this modest test case, there are already concerns that the government will issue more digital currency than it is able to back in real dollar bills.

Bank employees swiping their phone for a Snickers may be the humble heralds of a new digital economy in Ecuador.

9. There Are 317 Mammal Species in Ecuador

Ecuador facts reveal that the mainland of Ecuador, like the Galapagos Islands, is incredibly bio-diverse. There are 317 documented mammal species living in Ecuador.

Another spectacular animal we learn about from Ecuador facts is the Nine-banded Armadillo. This is one of the most amazing animals in the world and teaches us lots of great fun facts about Ecuador for kids. This armor-plated animal can also be found in the southern and southwest United States.

Ecuador facts show that the two-toed sloth, one of the slowest moving mammals in the world, also lives in Ecuador. These three incredibly different animals give you a small picture of the amazing bio-diversity that Ecuador has!

10. American Crocodiles in Ecuador Can Be Over 19ft. Long

It’s no wonder that Charles Darwin had his breakthrough on Evolution after visiting Ecuador. After learning about some of the remarkable mammals in our Ecuador facts, let’s look at a few of the amazing reptile species that inhabit the country. There are 350 species of reptiles in Ecuador – here are a few Ecuador facts about some of these incredible creatures.

Of the 20 species of turtle that live in Ecuador, Ecuador facts show that some species are amongst the oldest living lineages of turtles, with ancestors dating back over 200 million years!

Ecuador facts also tell us about the near mythical American Crocodile on the Pacific Coast. This crocodile can grow to be over 19 feet, or over 6 meters, long! The species is rare but still exists in Ecuador today.

Not to be outdone by its distant reptile cousin, there is also the Anaconda, a 19-plus foot snake that can be found in Ecuador! The Anaconda is one of the amazing 210 species of snakes that have been documented by Ecuador facts.