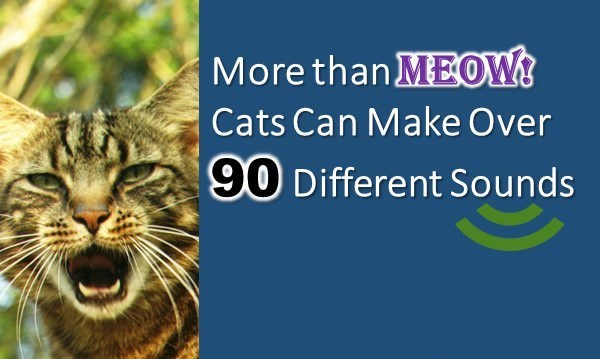 We’re crazy about cat facts. Something about cats, especially cute kittens, never fails to pique our interest. In light of this, we’ve found the perfect list of facts about cat — random facts that make learning cat facts fun for kids and adults alike! We’ve gathered a ferocious set of facts, from facts about to domestic cats to facts about big cats, like mountain lions and cheetahs. You won’t find a more incredibly interesting list of cat facts anywhere.

1. More than Meow! Cats Can Make Over 90 Different Sounds

Meow! Grrrr! Hisss! These are some of the noises we typically associate with cats. One of the most surprising cat facts is that cats can actually make almost 100 different sounds. From the peeps of kittens to the meows of adults, cats have a wide range of vocalizations. Kittens typically meow to their mother for milk, but most adult cats are only known to meow in the presence of humans. Cat owners must be seen as cat parents after all!

Scientific studies of the noises cats make have mostly centered on classifying the various sounds. Some scientists have sought to learn the truth behind one of the most mysterious cat facts – just how do cats purr? The rhythmic vibration of the purr comes from the cat’s throat, but, as yet, there is no agreement on how exactly the sound is made.

Do you ever get the feeling your cats are talking to you? Maybe they are! Cats have been known to imitate the sounds of human babies in order to attract the attention of their owner. They can also recognize the sound of their owner’s voice. However, cats lack the advanced mental capabilities of humans that enable language. So don’t worry – you’re still smarter than your cat. 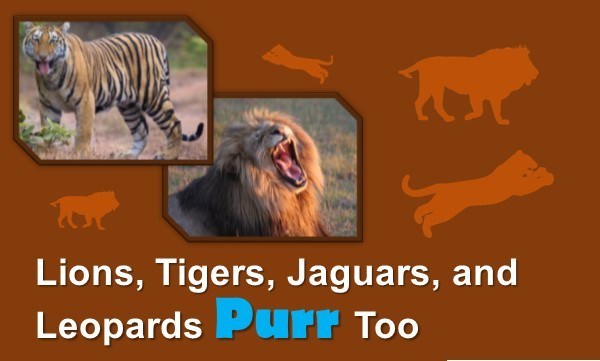 When we think of purring, we often think of house cats, but big cats like cheetahs and mountain lions also purr. Even tigers, lions, jaguars, and leopards sometimes make a purr-like sound when they exhale. The roar of a lion is actually closely associated with the purring sound all cats make. The ability of one species of cat to purr and another species to roar is based on their anatomy, including specific features of the vocal folds and the length of the vocal tract. 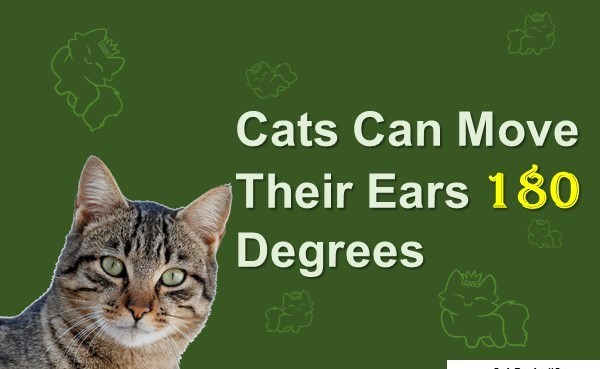 Cats have amazing hearing that’s made possible by some incredible features of their anatomy. They can move their ears 180 degrees. We’ve heard of looking back, but cats can ‘hear back’ too! Cats can also hear higher frequencies than humans. Humans can hear frequencies up to 20kHz, while cats can hear up to 64kHz.

Say what?! More cat facts? You heard right! Cats have an array of over 30 different muscles controlling their ears. This gives cats incredible control over their ears, as well as the ability to point each ear independently. One of our favorite cat facts is that cats actually have better hearing than dogs! Plus one for our feline friends!

Cats are incredibly good at hearing different tones and being able to identify the location of sounds. This leads us to another cat fact. Cats know when we’re talking to them. Our cats might look like they don’t hear us when they’re sitting on the middle of the stairs and we tell them to get out of the way, but they’re only pretending they don’t!

4. Milk Is Not Good For Cats! Most Cats Are Lactose Intolerant 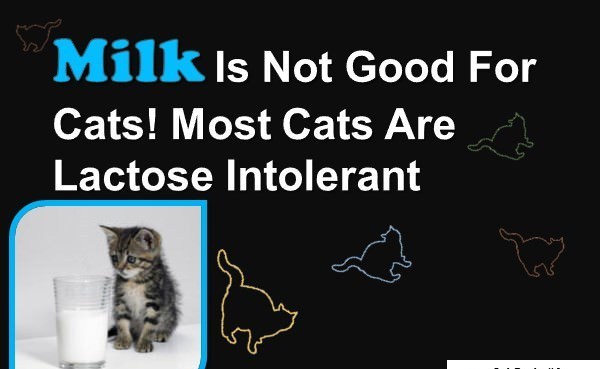 Some people think that feeding cats milk is good for them. This supposed cat fact is really a myth. Perhaps it’s all those cartoons we’ve seen featuring kittens lapping up milk from saucers, but cats are actually lactose intolerant and feeding them cow’s milk is not good for their digestive system.

It’s true, however, that kittens need milk in order to survive. The best milk a kitten can have is the milk from its own mother. When a kitten is orphaned, there is special kitten formula you can use to ensure the kitten develops into a healthy adult cat. Despite the myth, cow’s milk doesn’t have the right set of nutrients to help a kitten grow. While some cats are not lactose intolerant, the very best thing for all cats to drink is fresh water.

5. There Are Exactly 24 Whiskers On Every Cat 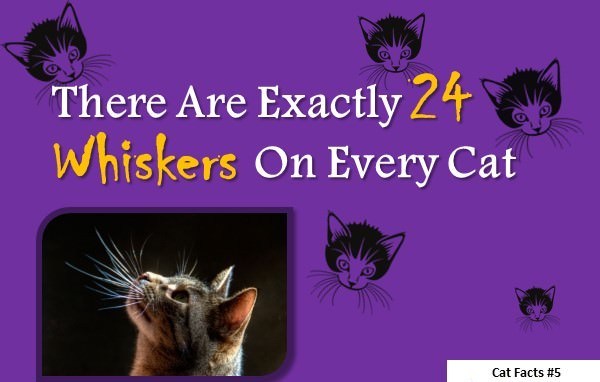 Cat’s whiskers are another amazing feature of their anatomy. There are exactly 24 whiskers on a cat, 12 on each side of their face. Cats use their whiskers for hunting and for sensing their surroundings. Veterinary neuroscientists have established some incredible cat facts relating to whiskers. A cat’s whiskers connect to a part of their brain that is similar to the visual cortex. This means that cats can almost see with their whiskers.

When hunting in close quarters, a cat’s whiskers will point towards their prey. It’s also been shown that cats with damaged whiskers have difficulty catching their prey. Those whiskers are more than just a fashion statement! Cats also use their whiskers to sense whether or not they can fit into a tight space.

6. All House Cats are Descended from One Species, Felis Sylvestris 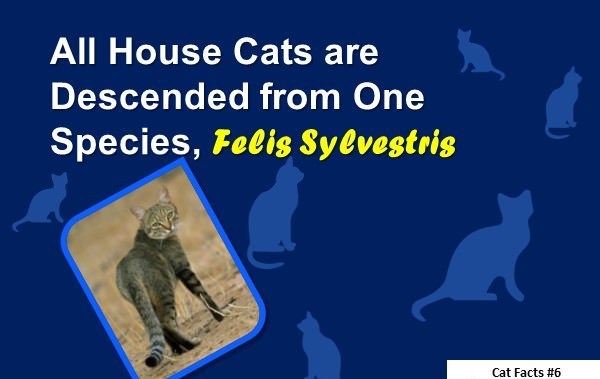 Recent studies show that domestic cats are all descendants of one species, Felis sylvestris. It’s an incredible cat fact that all the different breeds of cats in the world are from one species that was domesticated in the Near East nearly 12,000 years ago! As humans developed agricultural societies, it’s likely that cats became helpful in controlling rodent populations.

The love affair of Egyptians and cats is perhaps one of the best-known cat facts in history. Some gods were portrayed as cats in Ancient Egypt. Cat owners in Egypt were even mummified with their cats so that they would have their pets with them in the afterlife. Some cat owners today still treat their pets like gods!

7. The First Brand of Commercial Cat Litter Was Invented in 1947 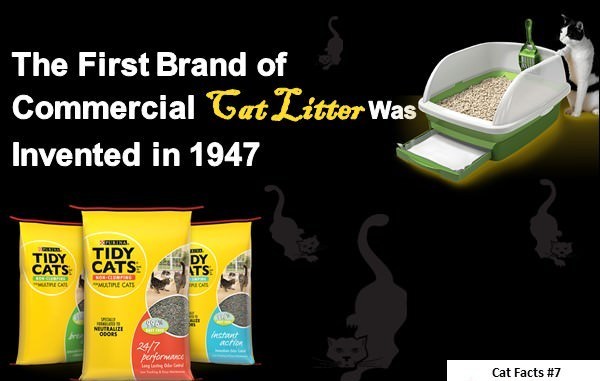 Of course, no list of cat facts would be complete without a kitty litter fact. File this one under practical cat facts! Cat litter was originally mostly sand that was bagged and sold by pet stores until 1947 when Edward Lowe introduced his clay-based Kitty Litter. At first, Lowe had trouble convincing his local pet store to sell the product.

Lowe took a gamble and gave his cat litter away for free until people were willing to pay for it. Lowe’s gamble paid off, and Kitty Litter became such a household name that the trademark became generalized to refer to all cat litter. Lowe continued in the cat litter business and founded the company behind the Tidy Cat brand of cat litter.

8. Is It Time for a Catnap? Cat’s Spend 2/3rds of Their Life Sleeping 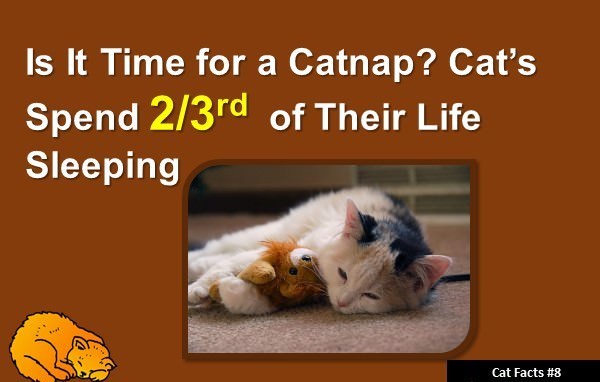 For cats, it’s almost always a good time to take a catnap. Has is it ever seemed like your cat is always napping? That’s because cats spend around two-thirds of their life sleeping, as opposed to humans who spend around a third of our time asleep. For kittens, sleeping is an important part of their developmental process. Kittens produce a certain type of growth hormone only during their sleep cycle. 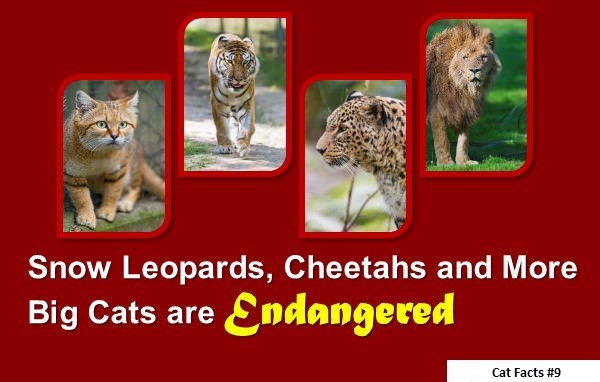 One of the sad cat facts is that big cats are now endangered all over the world. Snow leopards, mountain lions, jaguars, cheetahs, and other big cats are being pushed to extinction. As humans use more and more natural resources, we are harming the habitats of big cats all around the world.

In addition to reduced habitats, these proud predators often don’t have enough prey to thrive either. Big cats are still revered for their hides in some cultures, and poaching further threatens the existence of these incredible animals. You can do your part to prevent this sad cat fact from becoming a grim reality by refusing to buy any goods that are made from the fur of big cats. A real leopard print bag might sound cool, but it’s not cool for our big feline friends! 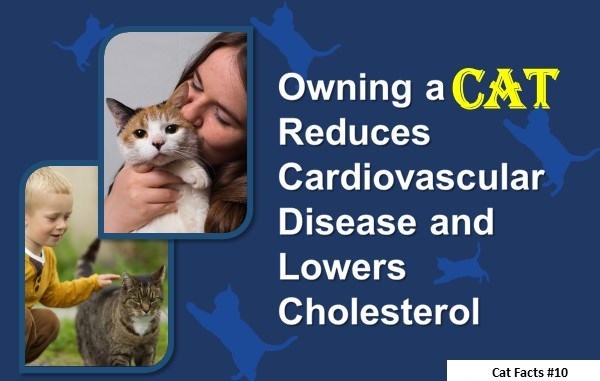 Doesn’t it seem like cat ladies live forever? That’s because they do! Cat owners enjoy the companionship of a four-legged friend along with a lot of additional health benefits. It’s a heart-warming cat fact to know that owning a cat reduces the chance of cardiovascular disease and lowers your risk of heart attack. Another heartening cat fact is that owning a cat has also been shown to lower your cholesterol and reduce high blood pressure.

Cats actually reduce allergies and asthma. While it may seem like a counter-intuitive cat fact — like the fact that cats can hear better than dogs — it’s true. Studies have shown that infants and kids exposed to cats are less likely to develop allergies and asthma later in life. Being exposed to cats early in life triggers a child’s immune system to begin developing immunity.

These little feline healers are holistic practitioners. Owning a cat is good for both your body and your mind. Cat owners frequently report lower levels of stress than other people, and cats have even been shown to be helpful in providing therapy for autistic children. A cat a day keeps the doctor away! People who own cats also require fewer trips to healthcare professionals. No wonder the Egyptians adored cats and many people still treat them like gods today!

There are so many amazing cat facts about these pluperfect companions. To learn more, visit a cat near you. With an estimated 90 million cats in the United States alone and many more worldwide, you’re sure to be only a whisker’s width away from a feline friend!