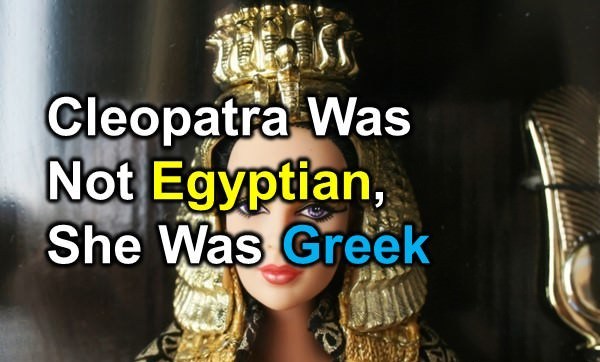 Cleopatra facts continue to fascinate people of all ages. Cleopatra was the last of the Egyptian pharaohs and is a legend in history. Establishing Cleopatra facts is a great way for kids to get excited about learning history, especially the history of Ancient Egypt and Rome.

Cleopatra brought the Egyptian and Roman empires together through her relationship with Mark Antony. This love affair has captured the hearts of people throughout history and continues to intrigue us today. Many Cleopatra facts relate to her ability to use her great beauty to achieve what she wanted.

A lot of books have been written about Cleopatra, and she has been depicted in a great number of works of art. Shakespeare’s Antony and Cleopatra is one of the best-known artistic works featuring Cleopatra.

Cleopatra Was Not Egyptian, She Was Greek

Although she was the last of the Egyptian Pharaohs, Cleopatra was actually descended from Greek origins. She was part of the Ptolemaic dynasty that ruled Egypt after Alexander the Great’s conquest.

The Ptolemies spoke only Greek, which explains why some Greek is shown in official documents from Egypt at the time. Cleopatra was given power at a young age, which gives us one of the inspiring Cleopatra facts for kids. At the age of just 14 years old, Cleopatra was placed as a deputy to her father, Ptolemy XII.

2. Cleopatra was Not the First Cleopatra, She Was Cleopatra VII

Although she is now simply known as just “Cleopatra”, she was actually Cleopatra VII. There were six other people with the name Cleopatra before her in the Ptolemaic dynasty. One of the many Cleopatra facts is absolutely certain: Cleopatra VII made a name for herself! Facts about her predecessors who were also named Cleopatra don’t fascinate us as much, so we refer to Cleopatra VII simply as Cleopatra.

3. She Became Pharaoh When She Was 18 Years Old 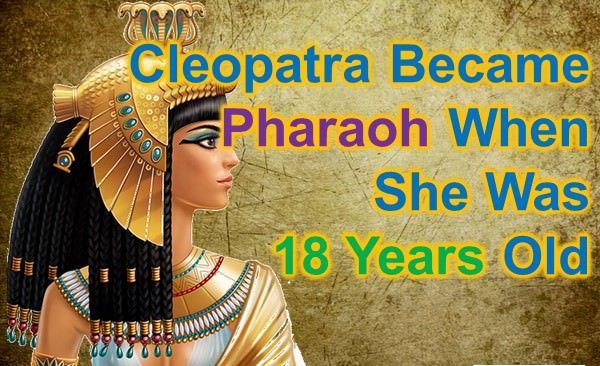 Another of the inspiring facts about Cleopatra for kids is that Cleopatra became a pharaoh – the Egyptian equivalent of a king or queen – when she was just 18 years old! The only downside was that she had to share the power with her younger brother, Ptolemy XIII, who was only 10 years old at the time. Imagine, a teenage girl and her younger brother being given power to rule an entire country!

4. She Was Exiled by Her Younger Brother Ptolemy XIII 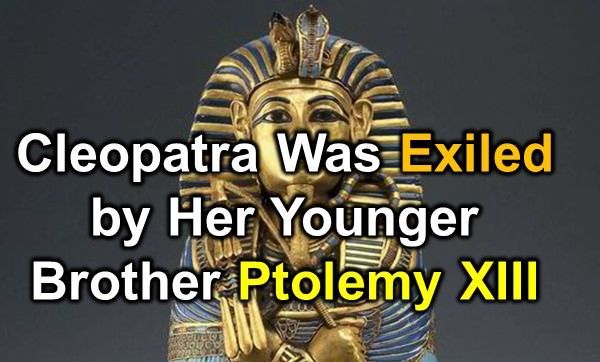 Three years after taking power, the stage was set for one of the little-known Cleopatra facts to occur. Cleopatra was ousted from power and sent into exile. Her younger brother, Ptolemy XIII, became the sole ruler. She was forced from power and out of Alexandria.

Cleopatra had upset a group of warriors who had been placed in Egypt to protect the rule of her father, Ptolemy XII. Cleopatra attempted a rebellion but had no choice and had to leave Egypt.

5. Cleopatra Regained Power Through Her Love Affair with Caesar 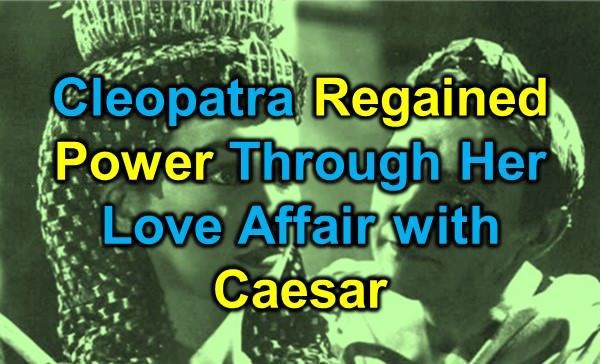 In one of the Cleopatra facts that provide us with a twist of fate, Cleopatra’s brother, Ptolemy XIII, made a similar political mistake and had a rival of Julius Caesar killed. Ptolemy XIII thought this would help strengthen Egypt’s relationship with the Roman Empire.

Ptolemy XIII did not know that this rival of Julius Caesar was also the widower of one of Caesar’s daughters. Caesar was furious, and took control of Egypt, declaring himself the judge in the case of Ptolemy XIII vs. Cleopatra. Caesar would decide who would be the ruler of Egypt.

In one of the many historical facts about Cleopatra that sound more like a story than actual fact, Cleopatra snuck into Julius Caesar’s room by hiding herself in a rolled up carpet. Cleopatra became Caesar’s mistress and bore him a son who she named Caesarion.

Julius Caesar decided to release his control of Egypt and declared that Cleopatra should be made pharaoh. The Roman armies defeated Ptolemy XIII, and Cleopatra retook the throne of Egypt. Caesar made Cleopatra and another younger brother, Ptolemy XIV, rulers of Egypt after defeating Ptolemy XIII’s armies.

One of the best-known Cleopatra facts regards her unrivaled beauty. Her relationship with Julius Caesar marked one of the first times that Cleopatra would use her beauty to move entire armies at her will. We can begin to see why she was legendary and how she quickly made a name for herself!

6. Cleopatra Was in Rome When Caesar Was Assassinated in 44 BC 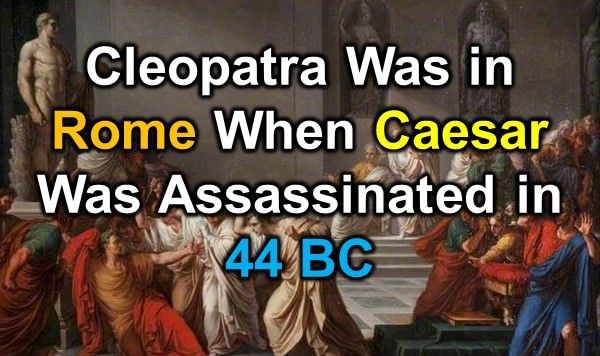 It was Cleopatra’s goal to have her son Caesarion succeed Caesar as the leader of the Roman Empire. By having her son become the next Caesar, Cleopatra would ensure that she maintained control of Egypt. Caesar was married, and it’s one of the scandalous Cleopatra facts that their relationship caused quite a stir among Roman society.

Cleopatra and her son lived in one of Caesar’s houses. There would be plenty of coverage in blogs and social media if a world leader was having such a public affair today!

Members of the Roman Senate were wary of the foreign influence on Caesar. Caesar had a golden statue of the Egyptian god Isis made that resembled Cleopatra. Despite Caesar’s gestures and Cleopatra’s attempts to have her son selected as heir, it seemed clear that Caesar was planning on making his grandnephew, Octavian, the new leader of the Roman Empire.

While Cleopatra was in Rome on March 15, 44 BC, Caesar was assassinated in one of the most famous murders in history. Cleopatra left Rome and returned to Egypt after the assassination. There is no speculation that she had anything to do with Caesar’s death. It was in Cleopatra’s best interest for Caesar to stay alive. As Caesar’s mistress, Cleopatra could be sure Egypt stayed out of the hands of the Roman Empire and under her control.

7. Cleopatra Was the Last Pharaoh of Egypt 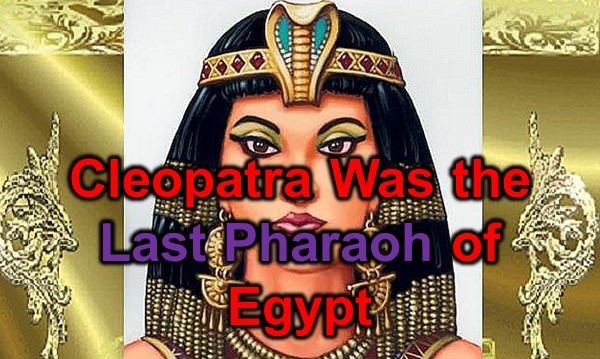 After returning to Egypt, Ptolemy XIV died. There was speculation that it was Cleopatra who poisoned him. This is another one of the deadly Cleopatra facts. Cleopatra was ruthless in her control of power.

When Ptolemy XIV died, Cleopatra made herself and her son, Caesarion, the joint rulers of Egypt. They would be the last pharaohs of Egypt. Although Caesarion was named as joint ruler and successor, Cleopatra held most of the power.

8. Cleopatra Had Her Husband Mark Antony Kill Her Sister 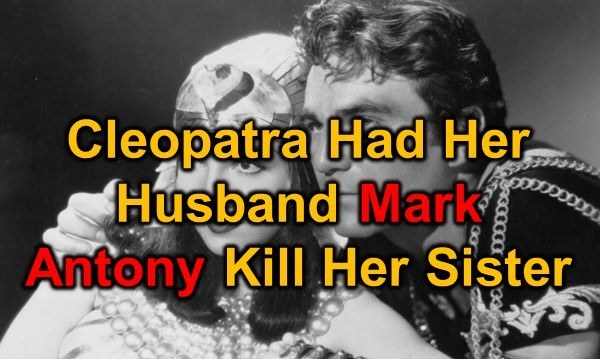 Mark Antony was one of the leaders who maintained the power of the Roman Empire after Julius Caesar was killed. Octavian and Mark Antony, who was chosen to succeed Caesar, fought a civil war against other people in the Roman Empire, including Brutus, who killed Caesar.

Mark Antony called Cleopatra to be questioned about some of the money she gave to the opposing side during the civil war. This is when the most famous of the romantic Cleopatra facts takes place.

Cleopatra wooed Mark Antony when she met him and he was so taken with her that he stayed with her during 41 BC and 40 BC in Egypt. Cleopatra had Mark Antony order the death of her only remaining sister, Arsinoe, in 41 BC. This is another of the deadly Cleopatra facts where she used her beauty to achieve malicious ends. This is the second time that Cleopatra used her influence to have a member of her own family killed so she could retain control of power.

Cleopatra gave birth to twins by Mark Antony and, when he returned to Egypt in 36 BC, they were married. Mark Antony settled in Egypt permanently and he and Cleopatra had another child.

9. Cleopatra Sailed and Fought Against the Roman Navy 31 BC 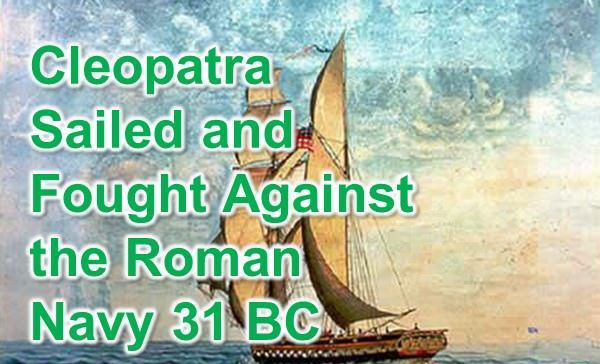 Mark Antony and Octavian had ruled the Roman Empire together since the civil war. Eventually, their partnership broke down and Octavian instructed the Roman Senate to declare war on Antony.

In 31 BC, Mark Antony and Cleopatra commanded their ships against the Roman navy. This is one of the Cleopatra facts that shows how fearless she was in pursuing her defense of Egypt from Roman control. They lost the battle and both fled with their ships. Octavian then invaded Egypt. When Octavian got near Alexandria, Antony’s soldiers deserted him to join the Roman soldiers.

10. Mark Antony and Cleopatra May Be Shakespeare’s Romeo and Juliet 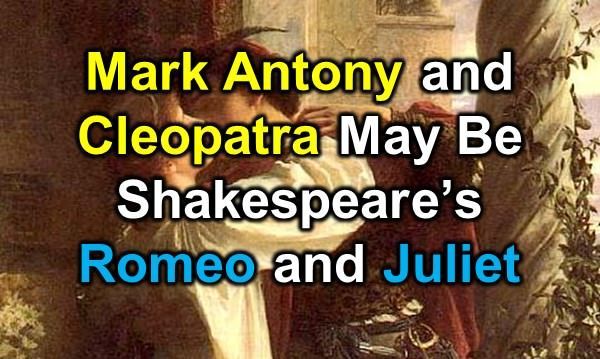 Cleopatra’s death is one of the more mysterious Cleopatra facts. Historians have recently suggested that Cleopatra took a poison drink and that is what killed her. Cleopatra died some time in 30 BC.

Perhaps one of the last romantic Cleopatra facts is the story told by Plutarch about Mark Antony’s death. This story may have influenced Shakespeare in his Romeo and Juliet masterpiece and his telling of Antony and Cleopatra.

Cleopatra was afraid that Antony thought she had betrayed him when Octavian’s forces took control of Egypt and Antony’s soldiers deserted him. She told a messenger to tell Antony that she was dead. When he heard this, Antony stabbed himself with a sword, but it was not a fatal wound.

Antony was begging people to kill him completely when Cleopatra told another messenger to fetch Mark Antony and bring him to her. Antony was almost dead when he was pulled by ropes into Cleopatra’s room. He lay dying on the floor and Cleopatra tore at her clothes and hair in despair over her dying husband.

Antony told her to calm down, drank a glass of water, and then died. Plutarch also says that Octavian captured Cleopatra after this happened and imprisoned her to prevent her from killing herself. However, a poisonous snake was hidden in a basket of food brought to Cleopatra while she was imprisoned. Cleopatra reached out her arm and let the snake deliver its deadly bite.

You should also read: Down Syndrome Facts on our blog: https://www.newinterestingfacts.com/

Cleopatra facts continue to fascinate us. This powerful woman was the last pharaoh of Egypt and was certainly a force to be reckoned with! Cleopatra used her charm and savvy to steal the hearts of both Julius Caesar and Mark Antony, securing power over Egypt.

It’s one of the sad Cleopatra facts that her son was only pharaoh for a short period of time and was killed by Octavian shortly after Cleopatra died. Caesarion’s death ended the line of pharaohs in Egypt forever. Cleopatra, who was feared and admired during her reign, was the last of the pharaohs of Egypt who had an active role in ruling the country.

As a Ptolemaic pharaoh, Cleopatra was Greek, and the way she secured power over Egypt was a sign of the changing role of Egypt in the Ancient world. Cleopatra had to become involved politically in the Roman Empire to preserve control over Egypt.

Egypt would no longer be an isolated empire, relying on the agriculture of the Nile. After Octavian conquered Egypt, it was made part of the Roman Empire, like much of the land bordering the Mediterranean Sea at the time. In many ways, Cleopatra’s death marked the death of Ancient Egypt.